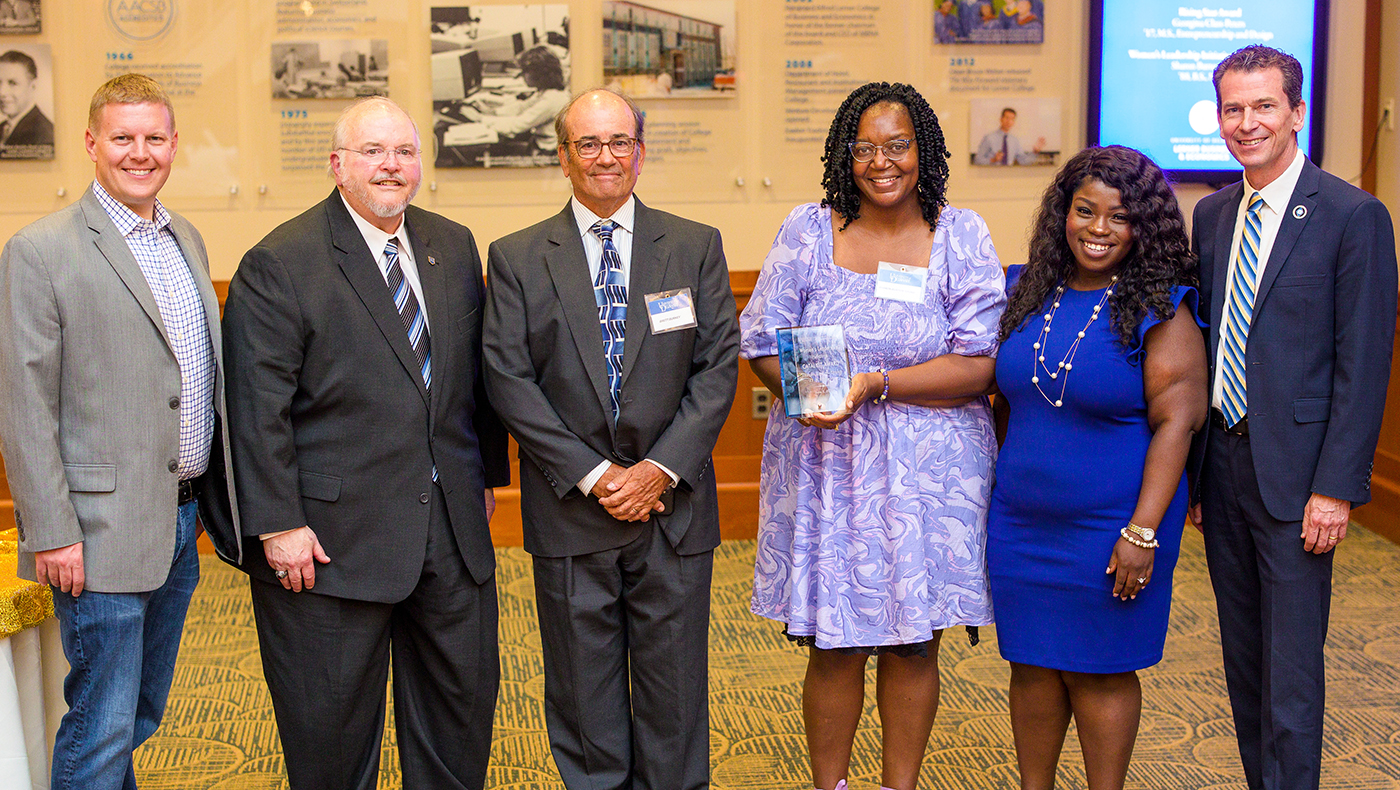 Presented each year to select UD and Lerner College alumni, these awards recognize those who have exhibited exceptional accomplishments, including professional success, contribution to the community, giving back to Lerner College and a commitment to excellence.

Lerner Dean Bruce Weber kicked off the ceremony, saying, “We are here to recognize four graduates and honor them, but this also is the celebration of our entire alumni network.

“This tradition is so good for our college and so good for our alumni board,” he continued. “I think, for many of us, this really highlights the amazing launch pad that the University of Delaware and the Lerner College is for our students.”

David Etue, Class of 1996 and chair of the awards committee of the Lerner Alumni Advisory Board, presented the first Alumni Award of Excellence to Brett Burkey, director of education of the Florida Council on Economic Education and assistant director at the Florida Atlantic University Center for Economic Education. Burkey earned a master of the arts in economics and entrepreneurship for educators in 2009.

“Thank you to the team and the selection committee for choosing me. Thank you to my colleagues and staff at the Center for Economic Education [and Entrepreneurship],” Burkey said.

“My time at Lerner has enriched me. It’s my responsibility to share what I  learned. I have nothing but confidence in the future of the center of the Lerner College. I will continue to carry the light forward.”

Etue presented the second Alumni Award of Excellence to John “Mike” Devenney, who retired last year after more than 30 years delivering global supply chain solutions. Devenney attended UD as a commuter student. He was very active and served as president of the Commuters Association, ran two student activity centers, served on the Student Center Council and participated in ROTC. Devenney earned a master of arts in distribution business management from MIRC Academy for Operational Systems Excellence in the United Kingdom in 1970.

“Thank you for selecting me to receive this. It is a great honor, and it’s really much appreciated,” Devenney said.  “My time invested in the University of Delaware paid great dividends. Although much has changed in 56 years, traditional factors have not.

“Opportunities still abound for those willing to take the opportunity to seek them out. Today I’m honored to serve as a member of the Lerner Advisory Board and uphold the hallmark set by Alfred Lerner. ”

Etue presented the third Alumni Award to Michael McMullen, CEO of Agilent. McMullen earned a bachelor of science in economics and business administration from the University of Delaware and an MBA from the Wharton School of the University of Pennsylvania in 1984.

“I was both honored and humbled to be selected for the Alumni Award of Excellence. It all started with my time at the Lerner College of Business and Economics,” McMullen said.

“I received a great foundational education with outstanding faculty, who not were not only experts in their fields but genuinely interested in the education and growth of their students,” he continued. “I consider myself lucky to have had this experience and could not imagine all those years ago that I would receive this recognition.”

Delaware. She earned a bachelor of science in political science and a master of arts in entrepreneurship and design at UD in 2017.

“I am so thankful to the entirety of Lerner for the support that they gave me. I am thankful to Dean Weber for helping me establish my future plans of attending and furthering my education at the University of Pennsylvania,” Class-Peters said.

“It feels good to be home,” she continued. “ I am so honored to be here and I thank God for making this possible.”

The Women’s Leadership Initiative (WLI) Catalyst Award honors a person who has catalyzed, who has advanced gender equity, providing both thought leadership, role modeling and action to make that a reality. This year’s award was presented to Sharon Burton-Young, founder CEO and director of Gracious Heart Nursing Services LLC. Young earned a bachelor of science in nursing in 1988.

“It was a true honor to receive this award,” said Burton-Young. “I am passionate about being a nurse and inadvertently became a business owner because I wanted to be able to serve my clients and patients the way I feel they deserve to be – with compassion, dignity, and excellence. The education I received at UD prepared me well for my career.”