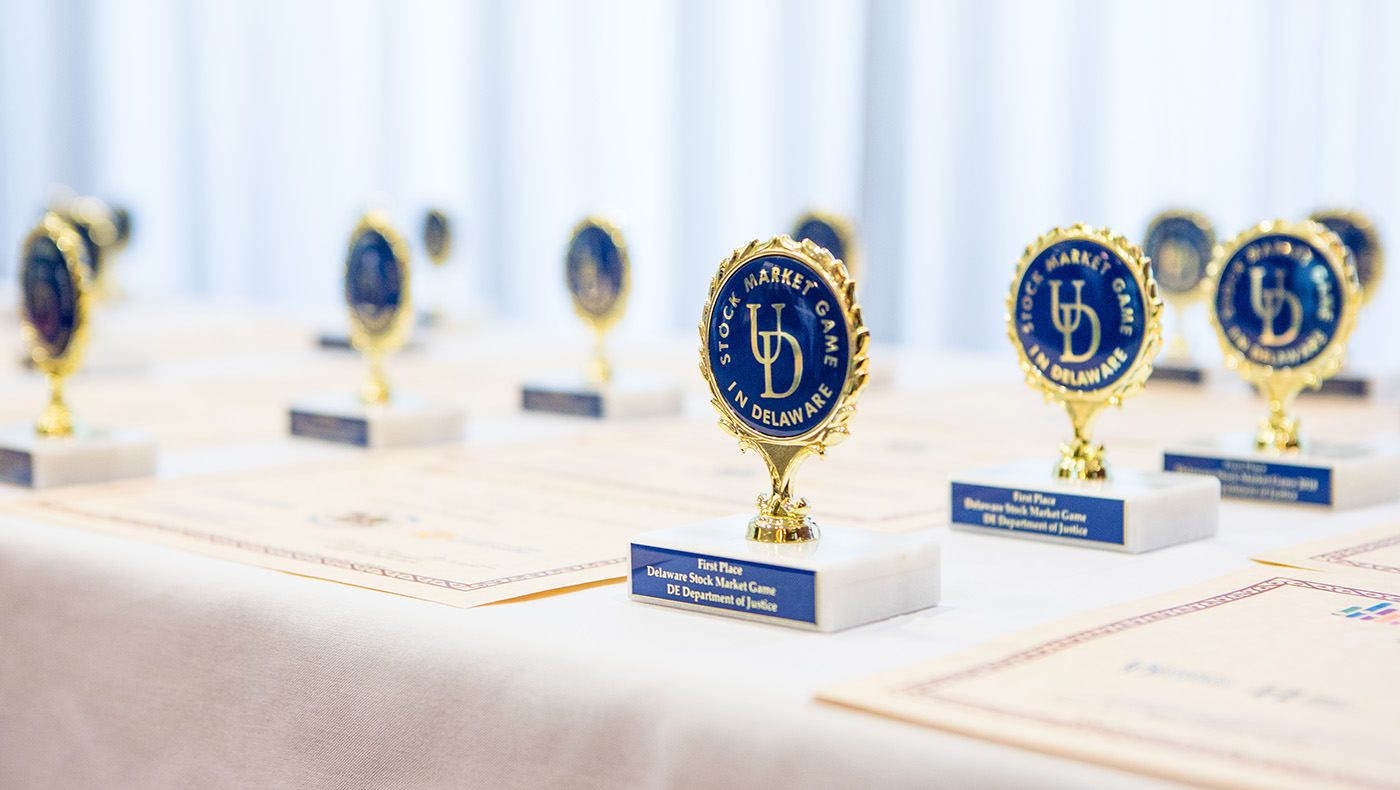 Students from Gallaher Elementary School, Cab Calloway School of the Arts and Newark Charter School were victorious in their divisions during the fall 2021 Stock Market Game (SMG) offered by the University of Delaware’s Center for Economic Education and Entrepreneurship (CEEE) at the Alfred Lerner College of Business and Economics since 1983.

SMG is a bi-annual educational finance simulation sponsored by the Securities Industry and Financial Markets Association and funded by the Investor Protection Unit of the Delaware Department of Justice with support from WSFS.

During the 10-week SMG, 986 students on 312 teams composed of Delaware’s elementary, middle and high school students virtually invested $100,000 on the New York Stock Exchange and NASDAQ. The goal of the competition is to achieve the greatest growth in their portfolios as possible. On January 12, the teams finishing in first and their coaches were honored during the virtual SMG awards reception.

A team from Gallaher Elementary School secured first place with the highest return consisting of $118,173. Guided by their teacher Christel Skaug, students Richard Lieux, Hassan Luzinda and Samuel Vazquez-Ortiz surpassed the growth of the S&P by over 10%.

Vazquez-Oriz shared their thought process going into the competition, “I remembered that Adobe was a computer company. Right now, people really need computers to stay connected. It was one of the stocks we thought a lot about. We investigated nice stock options and used our resources.”

A second team from Gallaher Elementary School won second place in the SMG. Students Bryan Arellano, Kelsey Davis and Connor Lund guided by teacher Christel Skaug earned a return of $117,288, which surpassed the growth of the S&P by over 9%.

Students Decker Reitemeyer and Mya Nocho, led by teacher Sverrir Georgsson, from Cab Calloway School of the Arts won first place in the middle school division. They earned a return of $115,036, which exceeded the growth of the S&P by nearly 7%.

“A large portion of our profits came from the company Crocs,” Reitemeyer shared. “With COVID-19 people have been prioritizing comfort more and I thought ‘well Crocs are comfortable!’ so we decided to throw a bunch of money into Crocs. The day we did it, it [the stock] went up a lot so we just put more money in.”

Led by teacher Justin Miller, students Olutoba Ojo and Logan Welsh earned first place in the high school division for Newark Charter School. They brought in a return of $117,140 which surpassed the growth of the S&P by nearly 9%.

Welch explained the team’s process, “We went on seeking Alpha and looked at the news to see what was trending. We looked at the charts to dictate what direction stocks were going to go.”

Miller shared a team strategy as well, “One of their strategies was that they had a nice investment in an index fund. They went for their home run but also had nice steady growth in the index fund they invested in.”

“The Stock Market Game is a valuable opportunity for students to learn about the world of investing while sharpening their research, critical-thinking and collaborative skills,” said SMG Coordinator Marion Jacobs. “They love the hands-on experience of decision-making and become sophisticated investors in the process.”

Director of the Investor Protection Unit, Jillian Lazar, congratulated the winners, “keep up the great work and keep thinking critically about your financial future.”

Chief Special Investigator Craig Weldon echoed the same sentiments stating, “You all did a great job. The high school students sound in line to become investment advisors and the passion in the younger kids is so refreshing to see.”