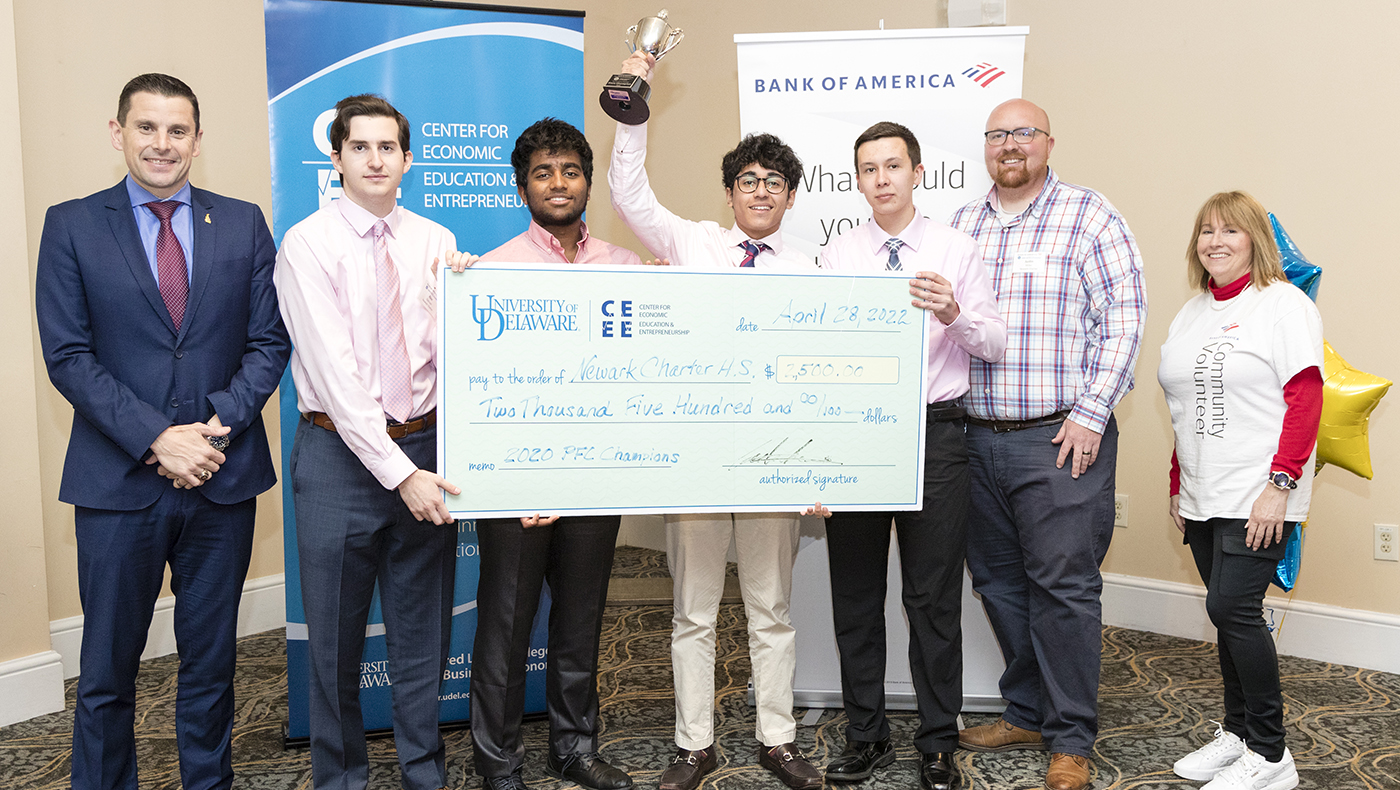 High school students from all three Delaware counties were represented at the Delaware Personal Finance Challenge (PFC) state championship in Newark recently. They were invited by the University of Delaware’s Center for Economic Education and Entrepreneurship (CEEE) in the Alfred Lerner College of Business and Economics. The event was sponsored by Bank of America. This year’s PFC was the first in-person competition held by the CEEE since the pandemic started, and it did not disappoint.

Nine teams from eight schools competed for the chance to win $500 per team member and teacher and a chance to qualify for the national championship and an all-expense-paid trip to New York City.

PFC participating high schools included St. Mark’s, Middletown, Odessa, two teams from Odyssey Charter, Smyrna, Newark Charter, Woodbridge and Appoquinimink. Each team consisted of four members. The challenge consisted of three rounds of testing exercises with students’ testing individually in the first two rounds and collaboratively as a team for the third. Scores from each round were tallied and a leaderboard updated all on the results throughout the day. In between testing, Bank of America volunteers gave out fun gifts during a trivia contest, conducted while scores were being tabulated. Students from each team scoring the most points during each of the first two rounds of testing were given the opportunity to select from a wall of cash envelopes, filled with monetary awards that ranged $5 to $20.

“The PFC offers high school students a fun, competitive experience in which they can build, demonstrate and be rewarded for their knowledge of prudent money management skills,” said Gail Colbert, CEEE personal finance coordinator. “Teams enjoy showcasing their expertise in the concepts of earning income, spending, saving, investing, managing credit and managing risks.”

A group of students from the Personal Finance Club at Newark Charter scored the most points after the three rounds of challenges, also besting students from St. Mark’s High School during the Quiz Bowl–– a rapid-fire, battle of questions where the top two scoring teams square off in an exciting, fiercely competitive buzzer round.

“It’s a great opportunity for students to come out and show just how much they have learned from a class that is so practical,” said Newark Charter personal finance teacher Justin Miller.

“I’ve had teachers stop me in the hallway and say, ‘Oh my gosh. I wish I had this class when I was in high school,’” Miller said. He added that word of mouth from students who have previously taken his class– one which follows CEEE-authored curriculum– has made it so popular. They learn about credit, balancing a checkbook, planning for retirement, investing in the stock market and insurance.

“So it’s great to see that the students have the opportunity to showcase what they have learned. To then win some money– that’s even better,” he said.

Every Delaware school in which personal finance is taught is invited to have students compete in an online preliminary round to qualify them for state finals. Subjects covered included lessons from the CEEE’s Keys to Financial Success course, which incorporates personal finance topics such as earning and income, protecting and insuring, using credit when buying goods and services, and saving and financial investing.

Bank of America, which has sponsored the competition for more than a decade and since its inception, again provided volunteers for the event who acted as proctors and judges.

“At Bank of America we have one sole purpose and that is to make financial lives better. And that is why we believe so strongly in the work that the Center for Economic Education and Entrepreneurship does to teach our young people about personal finance and economics, to give students a great foundation for their financial futures,” said Connie Montana, community relations manager and senior vice president for Bank of America. Montana led an applause for teachers and thanked them for preparing students and taking the time to bring them to the event.

“Congratulations to each of the teams and to each of you for being here. You’re already investing in yourselves. You’re already ahead of the game. So many students in our country do not receive personal finance or economic education,” she added.

Noah Qasim participated as a member of the state champion Newark Charter School team. A junior in school, he and his friends practiced for the event together and coordinated their matching wardrobes of pink shirts, to go with their slacks and ties.

“Last night we were talking amongst ourselves, and we wanted something a little subtle, something a little classy; something that would really stand out in front of the crowd,” Qasim said. “We already knew we were going to come here and dominate, but we wanted to add the finishing touch to the picture,” he said.

If winning wasn’t already impressive enough, Alex Esenyan, who acted as the Newark Charter team spokesperson during the Quiz Bowl, shared that he is headed to Georgetown University in the fall to continue his study of business and that he already has a ROTH IRA as a high school senior. Walking the talk, he and his friends plan to invest rather than spend the individual $500 they won.

“When we started preparing for this competition, we all knew that personal finance was important, but we didn’t know as much as we do now,” Esenyan said. “So, the things that we learned in the competition, we’re now able to kind of take and apply in our own world, focusing on getting better to make sure that we’re financially free or independent come adulthood.”

Students from St. Mark’s High School came in second with team members each receiving $250 cash prizes. Will Simpson, their personal finance teacher, has participated in the event five years now, claiming the championship once and placing second twice. He said his students are always eager to compete in PFC.

“For them, the money is really important, but I hear them say things like, ‘I know how to be an adult.’ That’s a pretty cool testimony; they love this. They love coming here,” Simpson said.

A group of sophomores from Woodbridge High school in Greenwood begged their teacher to drive them the hour and a half from Kent to New Castle County for the competition. Students started taking Josh Getka’s personal finance class in September and began learning lots of new information previously obscure to them– on topics like social security tax, investing, interest rates and the like.

Getka said the area he teaches in reports a high poverty rate and is home to many people learning to speak English as a second language. They are preyed upon by payday loan agencies and predatory student loan practices. They don’t have the financial literacy to combat this. Empowering themselves with personal finance knowledge and skills provides them with alternatives and ways to avoid these situations in the future.

Getka said he is hopeful that a personal finance class will one day become a graduation requirement for every high school student in Delaware, but the state is not there yet. For him, he was happy that 24 students signed up to take his personal finance class, and that several of them wanted so eagerly to compete in PFC.

“It’s a proud moment to come here and watch them. No matter how they perform today, I know they are better prepared for tomorrow,” Getka said.