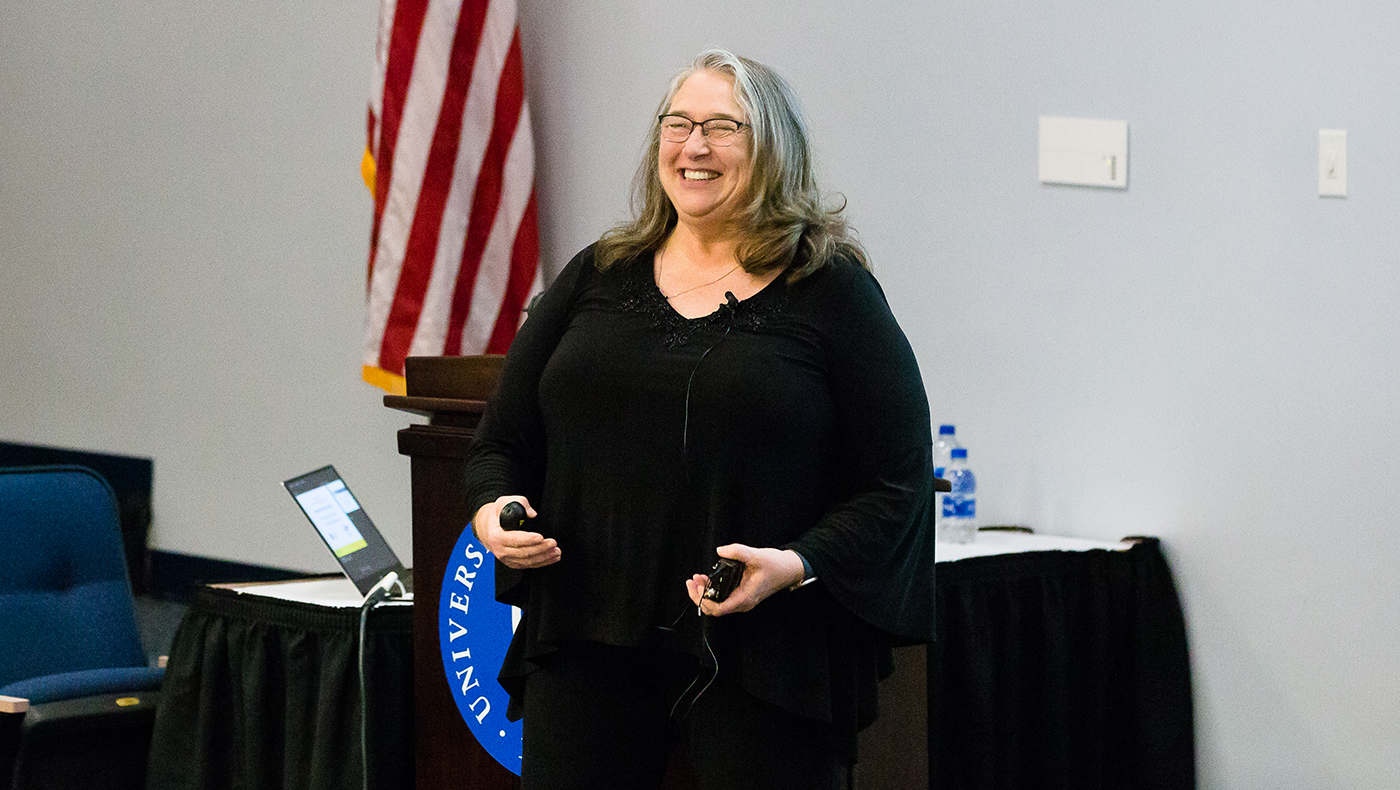 “You promised me Mars colonies. Instead, I got Facebook.”

With this quote, astronaut Buzz Aldrin, in a cover feature for the MIT Technology Review, expressed fears that our world’s rapid leaps in technology have led to advances that are superficial instead of world-changing and life-improving.

Inspired by this quote and others challenging the role of data science in society, statistics expert Katherine B. Ensor contends that what she calls “urban analytics” can solve big problems and even save lives. At this year’s W.L. Gore Lecture in Management Science at the University of Delaware’s Alfred Lerner College of Business and Economics, Ensor discussed this concept in depth, saying, “We can use our talents and skills to help cities and communities in better ways.

“It’s a challenge that is about people, about cities and communities, how we live,” continued Ensor, who is the Noah G. Harding Professor of Statistics at Rice University. “How can we live better? How can we use our resources better?”

Ensor has put her idea of “statistics and data science for stronger cities and communities,” to work in Rice’s surrounding community of Houston, Texas. There, she’s tackled some of the region’s greatest challenges, like recovering from Hurricane Harvey, preventing deaths from cardiac arrests and lowering rates of asthma attacks.

In order to do this, Ensor explained, she first had to access excellent and extensive data. For three years, she has led a team in creating the Urban Data Platform (UDP) at Rice’s Kinder Institute for Urban Research. Today, the UDP holds more than 170 curated, archived and publically available datasets.

Ensor describes the UDP as a “think tank for urban research.” With it, her team is asking the question: “How can we understand our communities better?”

Ensor’s team and the UDP proved the value of this data after Hurricane Harvey hit in 2017. With a death toll of more than 100 people, hundreds of thousands of homes damaged or destroyed and about $125 billion in economic damages, Houston was in need of better resources to predict and prepare for similar storms in the future.

In response, the UDP team created the Hurricane Harvey Registry, which will collect data from over 15,000 people over the next 10 years. They then used existing data to help the city improve its floodplain estimates. Using more than 62 billion raw data values, Ensor and her team created maps that combined information on land use, land cover and extreme precipitation trends.

The result? A map with 83% accuracy at predicting flooding in each area, a significant improvement. Houston now has critical insights to help mitigate the long-term impact of Harvey and improve flood management for future storms.

“Houston is being rebuilt and redesigned,” Ensor said, adding that her team’s findings of dramatic increases in development and extreme precipitation suggest that the city “needs to be designing for higher levels of rain.

“Why did this make a difference?” she continued. “It’s because I’m collaborating with the key decision-makers. I’m not the decision-maker, I’m the analyst in the background. That’s fine with me. I’m happy to be that person, but I want to collaborate with those that are making a difference.”

Other life-saving projects that Ensor has taken on in her work include helping Houston improve emergency medical services (EMS) responses to cardiac arrest and asthma events. In the case of cardiac arrests, for example, bystander CPR training is critical to survival rates, and so Ensor’s team, working with the American Heart Association, used data to find certain regions of the city that were particularly at risk and in need of CPR training.

“Improved understanding at the local level will save lives,” Ensor said. “We highlighted the communities that had low bystander CPR, but high cardiac arrests, and those were the communities where the education took place.” As a result of this project, “Over 6,000 residents were trained in the most at-risk communities on bystander CPR.”

Ensor’s team also used over 438 million air quality data points to pinpoint specific time periods when cardiac arrest risk is higher due to ozone levels: “We were one of the first groups to find a direct measurable link between ozone levels and cardiac arrest.” This meant that the team could advise EMS on optimizing staffing levels in high-risk areas during periods of greatest concern.

The result of these efforts? “We have a noticeable effect of survival for cardiac arrest,” Ensor said.

The team also worked with the Houston Independent School District to examine the impact of air pollution on asthmatic children, and was able to find time periods that present increased asthma risk. Due to these efforts, the Houston Health Department now sends out morning alerts on days that present these conditions, which they call “Asthma Aware Days.” These alerts remind students and schools to take precautions for asthmatic students’ safety and have action plans in place.

“We have a measurable impact on the reduction in asthmatic incidences in the Houston Independent School District,” Ensor said. “And that’s just a tremendous outcome.”

Whether preventing asthma attacks, improving cardiac arrest survivability or improving hurricane preparedness, Ensor said that her results demonstrate the incredibly impactful role that statistics and data science can have on people’s lives. This is a perfect role for universities of all kinds to take on, she said, as universities represent “the permanent infrastructure of our communities.”

Crucial to this success, she added, is her willingness to engage with the local community: “I do this because I see an opportunity to make a difference… I do this in Houston because I know Houston.”

This, she concluded, is proof about “the strength of statistics and data science research: What we do really does matter. It’s not just Facebook. There are bigger problems that we’re solving.”

About the Gore Lecture

The W.L. Gore Lecture Series in Management Science, presented by UD’s Lerner College, is sponsored by an endowment from the Gore family. This lecture series features experts in the application of probability, statistics and experimental design to decision-making, including applications in academia, business, government, engineering and medicine.

The series recognizes the key role that the fields of probability, statistics, and experimental design have played in the success of W.L. Gore & Associates Inc.