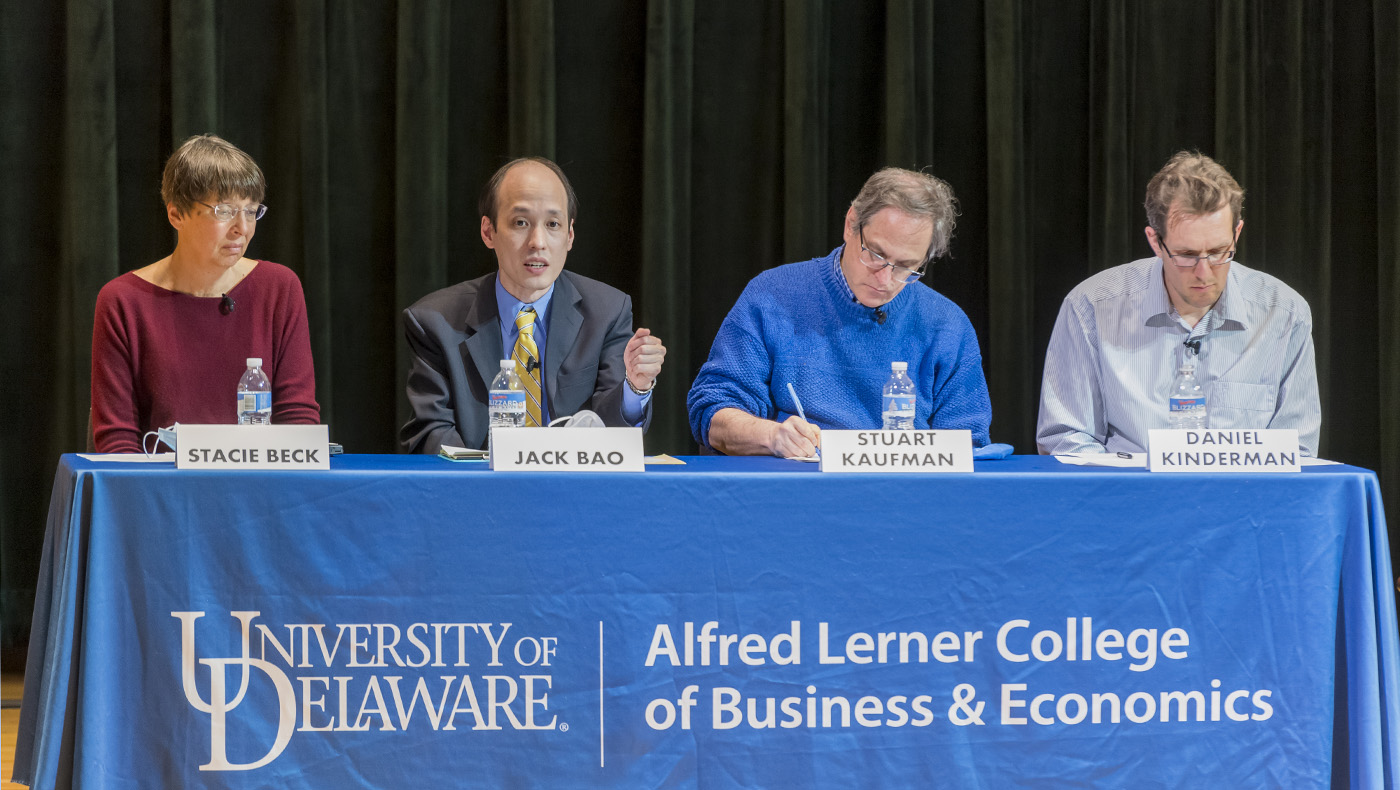 Four University of Delaware scholars sat down on March 14 to discuss Russia’s invasion of Ukraine, financial sanctions levied against Russia by a consortium of countries, and the effects of these events on the global economy. The panel was entitled “War in Ukraine: Are economic sanctions on Russia working?” It was held in person at Gore Recital Hall and hosted by the University of Delaware’s Alfred Lerner College of Business and Economics and the College of Arts and Sciences Department of Political Science and International Relations.

“I think it’s a really good question to say ‘Can this economic sanction regime that’s been put in place limit or prevent military aggression? Can it be as effective as military action?’” Weber began by asking the panel.

The United States and European Union countries are leading the sanctions push that Vladimir Putin described as an act of war against Russia, the 11th largest economy in the world, and early signs suggest it might have some immediate effects.

Weber pointed out four different sanctions that have been initiated for the panel to discuss. The first was the ban on financial and information exchanges. The Russian Stock Exchange closed on Feb. 25th, the day after the invasion began, and had not reopened as of the panel.

In addition to that, the ruble, Russia’s currency, has fallen about 50 percent, the Russian Stock Exchange has fallen 85 percent, and transactions have been banned with Russia’s Central Bank, which holds almost $700 billion in foreign reserves. Half of those funds have been frozen. Furthermore, exports from Western countries into Russia, such as semiconductors, computer lasers and telecommunications equipment, have been banned, and there has also been a freeze on the U.S. assets of the Russian government, Weber said.

Kaufman, who spoke first, framed his part of the discussion around a two part question. The first was “Do countries imposing sanctions succeed in imposing economic pain on their targets?”, to which he answered “yes.” He dove more into the second part of his question, which was “Does the economic pain cause the country acting as the aggressor to change their behavior as a result?”

“So if there is a process by which Putin might be pressured, that process is only the political destabilization process, right? Can we put enough economic hurt on Russia that it starts to undermine Putin’s grip on power?” Kaufman asked.

Kaufman said that his best guess was no and that Russian President Putin would not lose his position before the end of the Russia/Ukraine conflict. Kaufman said this is because Putin does not care about his country suffering in the long run, and that he is consumed with placing Russia back on the international stage as a major player, which he has conflated with his own place in history as being what’s best for his fellow countrymen.

Kaufman ruled out the possibility of there being a military coup in Russia because there hasn’t been a successful attempt in the country for more than two centuries. In addition, the Russian Federal Security Service, the FSB, is embedded in the military to prevent and cut off any potential coups. Putin controls the media and does not allow for fair and open elections, so as long as the FSB feels that their interests are met by Putin, he will be protected, Kaufman said.

“What Putin is trying to do is put in power a new Ukrainian government that will be friendly to him. The problem with that is that that government will fall the minute Russian troops leave or the minute Russian troops stop propping it up. So the role of economic sanctions then is to make this entire episode really costly, and then when it ultimately fails for political, not military or economic reasons, the whole thing will be seen to have been a catastrophe,” Kaufman said.

While Kaufman focused on the political aspect of the invasion, Beck focused her talk on the economic implications. She described a mixed bag of possible damage done to the Russian economy and how it can maneuver during sanctions. What was typical for countries post World War II was the expansion of world trade, which in return would increase foreign direct investments, she said. Foreign direct investment from global corporations would build plants and facilities and invest in technology, ideally raising standards of living for a country’s citizens, but not in Russia, Beck said.

“This process can stall though if you have a more repressive regime. And that’s what you have in Russia: a somewhat repressive regime that doesn’t allow that kind of economic freedom and a political and economic elite that essentially is enjoying the profits at the expense of the population,” Beck said. “So imposing sanctions on a regime like that is not subjecting the population to as much hardship as it might here, because they haven’t gotten, you know, very far up that growth curve.”

Sanctions on Russia will cause wariness about foreign direct investment in Russia for some time, according to Beck. But Russia has an advantage being the third largest oil producer in the world. The fact that they are vertically integrated in terms of oil and gas will ease the hurt of sanctions against them, but it will blow back on other countries dependent on their oil, fertilizer and wheat by raising the prices on them, Beck said.

Another theory is that Russia could start doing more business with a country like China, which is always looking for raw materials and food, but China would have to weigh the option of angering the U.S. and other sanctioning countries. Other countries might also feel the pinch via increased price of goods the longer the sanctions against Russia last, which could cause political unrest.

Bao, who spent four years working at The Federal Reserve, opined on how effective the sanctions against Russia’s Central Bank have been.

“From a pure economic perspective, is the Russian economy feeling some pain? I think the answer is yes,” Bao said.

That would be for a couple of reasons.

“The first, and probably the biggest, is the destabilization of the ruble,” Bao said. “That is because the most important mandate for the Russian Central Bank is to stabilize the ruble, which has lost almost half its value recently. When Russia started building up troops at the Ukrainian borders investors started selling off rubles and buying other currencies.

“Russia would have needed to purchase rubles to fend off any potential devaluation, but sanctions limited their access to the $630 billion in foreign currency that they hold,” Bao continued. Most of that currency is in euros, and 40-60 percent of it is held by sanctioning countries, which have frozen the money.

“The Russian Central Bank hasn’t been as successful in defending the ruble and we’ve seen this huge devaluation since both the end of the year and maybe particularly since February, and so that’s probably the most important kind of role the sanctions probably play on the central bank,” Bao concluded.

Another area of hurt for the Russian Central Bank because of sanctions is that it cannot act entirely as a crisis intervention weapon without access to U.S. dollars, much like many countries’ central banks including the Federal Reserve were forced to do during the recent pandemic. Russian banks were cut off from being able to access SWIFT, which is a global financial messaging system that allows banks to make payments in multiple currencies. Half of global transactions are handled in dollars. This limits liquidity and stability and it will limit Russian companies’ ability to import goods, Bao said.

Bao wondered how Russian companies would get funded by the central bank there. Russia owns about $40 billion in international bonds in dollars and euros, but several Russian companies have billions of dollars in dollar-denominated debt, some of which were due in early March.

“And so you’re going to have these companies that have U.S. dollar-denominated debt and they’re going to have to have access to U.S. dollars. If they don’t already have dollars that they can access, the devaluation of the ruble is going to be a real problem for them because it can be very expensive to service that debt,” he said. “So from that perspective, I think those are probably kind of the main roles of the sanctions on the central banks.”

Ending the discussion and taking the focus back to politics, Kinderman offered a more ominous outlook for the U.S.

Kinderman said specifically that it was a mistake to think the harsh sanctions would thwart the political intentions of Putin and that they would instead galvanize him and his supporters and show him to be steadfast in his mission in Ukraine. What is more is that he said that sanctioning countries have overestimated the power of economic motivations.

“The sanctions are being effective. This seems premised on Putin being responsive to pressure from Russian oligarchs. And I think this is just not a realistic expectation,” Kinderman said.

Russian oligarchs are in a more precarious position than western businessmen, Kinderman said. The most ominous of Kinderman’s warnings was that he said he feared the weaponization of finance will accelerate the fragmentation of the global economy and the post dollar world. Kinderman said that would have long term repercussions for the United States and that it would lead to the country losing its position as the leader in the dollar-based economic system. He pointed to the possibility of countries like China making their currency fully convertible.

“I’m not suggesting that the U.S. will lose its exorbitant privilege of having the world’s international reserve currency immediately or in the immediate future, but I think we should count on this being very likely. And the question is not whether it will happen, but perhaps how soon it will happen,” Kinderman said.

He concluded that he thought sanctions would continue to push energy prices higher, which would add to domestic social conflict in many countries, which are already strained.

“And these problems, sadly, I fear will worsen”