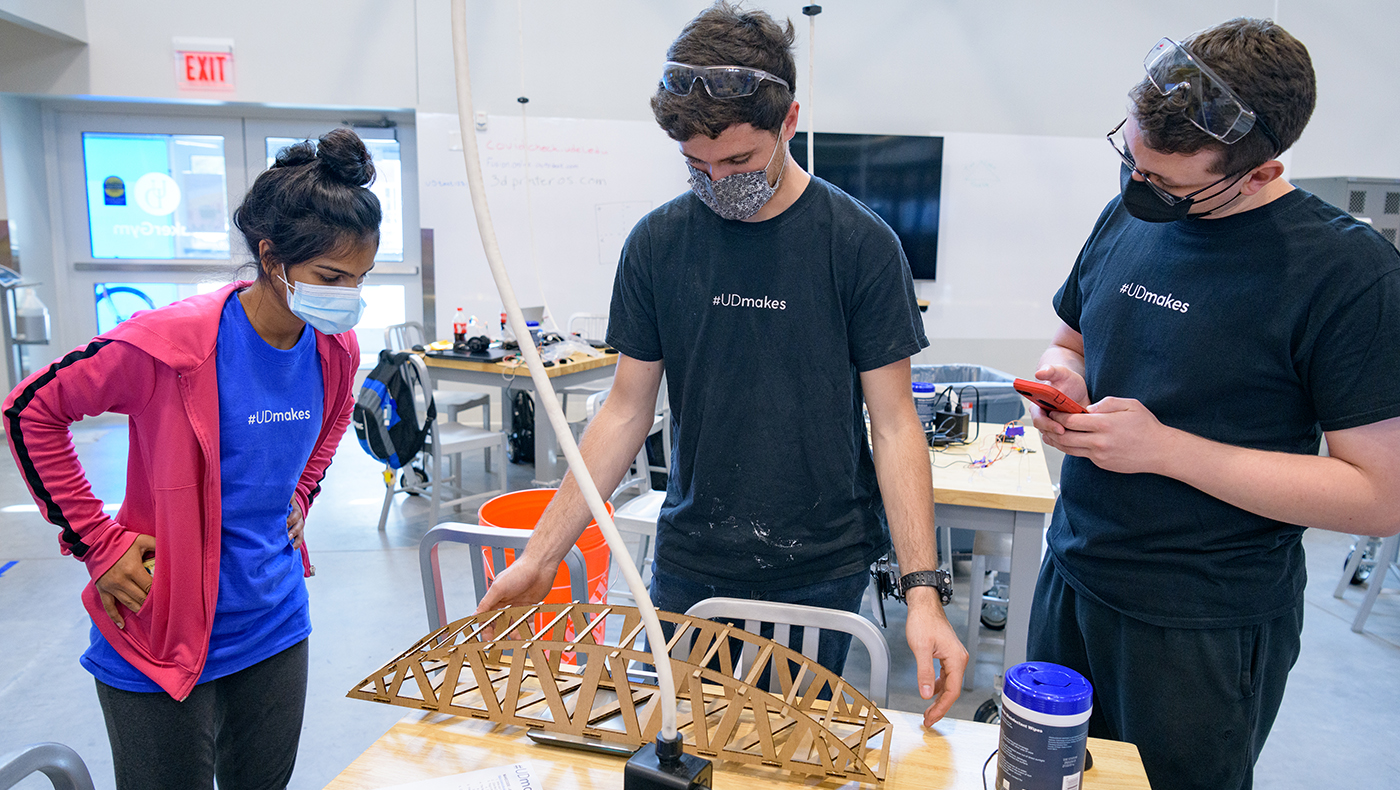 Editor’s note: This article by Marisa Harczuk originally appeared in the November 24, 2021 edition of UDaily. It is reprinted with permission.

It all starts with a desire to make something. With no experience required, students from the Red Clay Consolidated School District were given the opportunity to be involved in a one-week program to delve into their entrepreneurial nature.

University of Delaware officials with its MakerGym collaborated with Red Clay schools to create four one-week programs that allowed the students to spend their time “making.” The MakerGym is an inter-disciplinary design and fabrication studio, open to students, faculty and staff. It provides training and resources for people with little to no experience, giving them the opportunity to learn a new skill and begin creating and producing tangible or digital things.

Forty one students of different backgrounds and experiences took part in the program during the summer of 2021. Some want to go into digital design, some structural engineering, but the one thing that they all have in common is the desire to design something great.

“[My teacher] emailed me about the program and I thought it was pretty cool,” Tiamson said. “I’m honored to be a part of it and learn more about mechanical engineering.”

In addition to engineering, the students were also exposed to computer science, fashion, agriculture, landscape architecture and art. Brooks Twilley, operations manager for the UD’s MakerGym, said the curriculum was developed to expose students to many of the major design and fabrication opportunities within the MakerGym as a foundation for learning new skills.

From there,  Horn Entrepreneurship — which co-sponsored the program with the MakerGym — had the opportunity to present the curriculum to the Red Clay district leaders, who accepted the program, allowing them to move forward with the four individual week-long cohorts.

“Red Clay Consolidated School District was looking for opportunities to provide their students the hands-on experiences that they might have missed over COVID,” Twilley said.

Sam Golder, the senior director of teaching and learning at the Red Clay Consolidated School District, said he was thrilled to partner with UD to give the students a unique opportunity.

“Not only did our students receive expert tutelage in a potential career field, but they were also able to see firsthand the amazing facilities at the University,” Golder said. The district has schools in the Delaware towns of Hockessin, Greenville, Pike Creek, Newark, Elsmere, Newport and the city of Wilmington.

Before the program began each week, students were asked to complete four hours of self-guided modules on computer aided design (CAD) to prime their design literacy.

“Completing the modules gave them the basic proficiencies to come into the program speaking a common design language,” Twilley said.

The design software being used is called Fusion 360 by Autodesk, a web-based software that is free for students. It allows the students to collaborate with each other and connects the development process into a single cloud-based platform, according to the company website. The combination includes computer aided design (CAD), computer aided manufacturing (CAM) and computer aided engineering (CAE).

“It’s sort of a one-stop shop for us in terms of one design tool and one manufacturing tool,” Twilley said. “There’s even testing and evaluation tools built in to simulate loads and stresses on your parts before you produce them to see if they will hold up.”

Natalie Icasiano, a sophomore at Cab Calloway School of the Arts, said the work before the session was crucial to their success during their time with the MakerGym.

“It is better to learn the programs beforehand and learn the assignments that were recommended,” Icasiano said. “Then you can start working right away and have more time to do the fun stuff.”

To enrich their experiences in the MakerGym, which is in Pearson Hall, a broad and talented array of UD professors highlighted applications for making thinigs within their different areas of study. Students were also given the opportunity to explore other processes, including computer numerical control (CNC) machining and sewing textiles.

Erin Sparks, assistant professor of plant and soil science and biological sciences, welcomed the students to the UD Farm, operated by the College of Agriculture and Natural Resources, and taught them about innovation and design in agriculture. This module gave them the opportunity to spend time outside of the classroom and learn about the challenges that can rise when your designs are brought to fruition.

“The students were engaged in critical thinking and problem solving and had some great suggestions about the continued development of tools for our research on plant biomechanics,” Sparks said.

Another demonstration, physical computing and basic robotics, was taught by Ashley Pigford, associate professor of graphic and interaction design.“The students learned quickly and everyone constructed a micro-controlled walking robot in just three hours — even those who began with no experience at all,” Pigford said.

Aaron Terry, assistant professor of art and design, demonstrated printmaking to the students. He showed how to use four different layers of color plates — cyan, magenta, yellow and black (CMYK) — to print designs one layer at a time.

Dioyssios (Dio) Crisp, a sophomore at John Dickinson High School, said the collaboration process allows the students to take the time to figure out what needs to be done to improve the product.

“Basically, it’s a lot of setting up parts, going back and forth, seeing what works and what doesn’t,” Crisp said. “After a while you get to a final product and even then there might be something wrong with it, so it’s never a straight line. It’s a whole bunch of going back and forth between mistakes, tweaking and editing.”

After each week-long session concluded, the students received one UD credit for the class called Intro to Design and Making  (ENTR167), which is run through the University’s Division of Professional and Continuing Studies. This credit is specifically for those participating in the accelerated design and fabrication summer course.

The students gained much more than just one college credit, though. They spent the week learning how to approach a project and evaluate what is necessary to have a successful outcome.

“[They find out] how to think two or three steps ahead in order to make the most of the potentials presented by the materials, whether that be for a creative, fine arts project or for a technical project relating to any number of fields,” Aaron Terry said.

Terry said that as he did a demonstration, he also had to work through problems. There was an “Aha” moment when he continued through trial and error to succeed.

“They saw that failure often plays a role in the ultimate success of a project in the learning process of discovery,” Terry said. “By failing, we can recognize, understand and fix our mistakes and make a better future project. Oftentimes, success happens out of repeated attempts and iterations of an idea.”

These four individual week-long cohorts gave the students access to an abundance of materials and support that they may not have access to in their school. Their unique, hands-on experience will give them an advantage moving forward in their career path.

Ashini Pachauri, a sophomore at the Conrad School of Science, was taken aback by the technology that they were allowed to use.

“I was so surprised when I came in and saw all of the technology and equipment,” Pachauri said. “It was really cool and way different than high school.”

The summer is somewhat of a slower season for the MakerGym, so this was the perfect opportunity to expose local high school students to the wonderful technology that the MakerNetwork has to offer.

This program has a diverse group of students participating, which is representative of K-12 education in Delaware at large.

“Women and girls have been underrepresented in making spaces,” Twilley said. “In the last week, those who identified as female comprised 40% of our class, which is an incredible improvement upon what you generally see across the board.”

At the end of the day, the students were able to leave the program feeling more confident in their ability to create.

“I think the inspiring part is exposing somebody to a skill and seeing where they take it,” Twilley said. “That proverbial light bulb going off and the excitement that builds around their new skills, to me is, I think the best.”

The MakerGym is open to students of all majors. Learn more at the MakerGym website.