The Chancellors: Past and Present 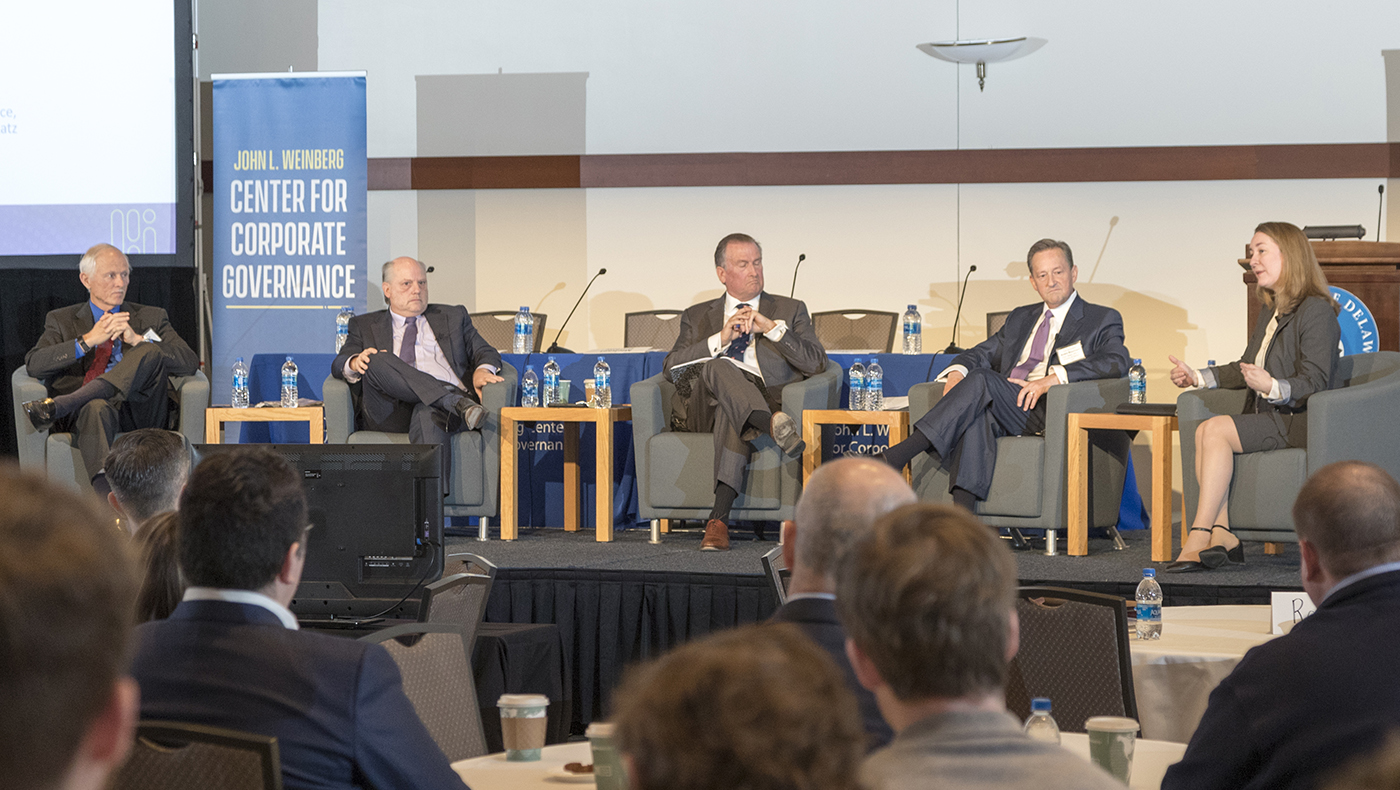 The Delaware Court of Chancery, established in 1792, is the nation’s leading forum to settle business disputes involving corporations and other business entities. This includes a majority of public corporations that have been incorporated in Delaware, including companies such as Apple, GE and Coca-Cola among others.

So how has the Chancery Court maintained its relevance to make important decisions on businesses worldwide?  Recently four chancellors, including the current and first female chancellor to lead the court, Kathaleen St. J. McCormick, gave a look inside the Chancery Court during the 2022 Weinberg Distinguished Speaker series at UD. The event, which took place on March 23rd, was held in Clayton Hall.

The Weinberg Center for Corporate Governance is part of the University of Delaware’s Alfred Lerner College of Business and Economics. It provides a forum for business leaders, members of corporate boards, stockholders, the judiciary, the legal community, academics, students and others interested in corporate governance issues to interact, learn and teach. The Center’s goal is to positively impact and improve the field of corporate governance and the capital markets.  It is one of the longest-standing academic centers and the only corporate governance center in Delaware.

Former chancellors William Chandler III, Leo Strine Jr. and Andre Bouchard, who serves as chairman of the advisory board for The Weinberg Center, also participated. It was Bouchard’s idea to bring the group of chancellors together to discuss Delaware law, the culture of the court and its inner workings. The discussion was moderated by Gregory Williams, a prominent Delaware corporate attorney and director of Richards, Layton and Finger.

Unique in its format, which is close to its original British origins, the Chancery Court consists of five justices. The Chancellor is the head of the court and there are four vice chancellors who hear and decide matters and causes in equity. This includes such things as corporate matters, stockholder litigation, trusts, estates and other fiduciary matters. The court is known for its deep expertise in and exposure to issues of business law.

“Delaware is the home of the largest corporations and the largest number of corporations so I think the significance of this program is that this is where all of this law is developed, in Chancery Court. And so having the perceptions and the history of the development of that law coming from the mouths of these former chancellors and the current chancellor is a real gem of a program,” Weinberg Center Director Justin P. Klein said of the discussion.

Lerner Dean, Bruce Weber, welcomed speakers and guests to the event. “We like to let our students know that business does a lot of good for society and that they, training as managers, are preparing to do good things for society in their communities,” Weber said.

The Chancellors focused their discussion on multiple topics, some of which included non-legal matters that arose while on the court, doctrinal developments and changing technology. Chandler began the panel speaking about the changes in technology while he served.

He humored guests with a story about when he started working in the Delaware Superior Court in 1985 and then the Chancery in 1989, he typed on an IBM electronic electric typewriter with white out to back up and correct mistakes, but even then, he knew technology would change. He also pointed out several technological advancements that enhanced the way the court conducted business during his tenure, including a new filing system, File and Serve, three new modernized courthouses, and video screens to livestream proceedings, including the Disney Company trial in late 2004 into 2005.

Chandler also noted that Chancery Court absorbed what was then an independent office that handled all clerical work for the court, which helped run the court’s operations more smoothly.

Another recollection of how the court changed during his time there was in terms of diversity of parties and counsel, Chandler said. More national law firms started to open offices in Delaware.

“You began seeing a different mix of players in the courtroom, which interestingly has had a positive effect on Delaware in terms of something you probably don’t think about, the diversity of the bar. It’s actually been amazing,” Chandler said.

He said the diversity of attorneys and law firms is one of the more positive things that has happened to the court. Some of the increased cases that the court began to see involved stockholder litigation.

Strine, who served as Chancellor from 2011-2014, cited emphasizing legal standards and making sure that there were predictable and reliable pathways to get transactions done. There was an emphasis on top down continuity on administrative matters and making clear cut Chancery guidelines as part of a rules committee. He said the mission was to operate consistently for judges and practitioners in Chancery.

He described making the court more efficient and equitable in terms of what court employees got paid and making sure there was parity in the work given to clerks.

Bouchard, who served as Chancellor from 2014 to 2021, followed by saying that he made it a point to go over guidelines for everyone on how judges wanted things done. More cases began moving toward trials instead of settlements during his tenure, Bouchard noted.

McCormick, who took over as Chancellor in the middle of the pandemic, said the court is currently trying to get back to normal. When she started, members of the court participated via Zoom, and then it moved to limited capacity in person with people required to wear masks. Recently, the court has reopened, and she is able to convene trials in person.

“I do think we’ve emerged as a court having learned a lot. We’re able to reassess our priorities. We focus ourselves on the goals and recommit to the people around us,” McCormick said. “The pandemic was really a testament to the fact that the strength of the court is now and it always has been our people, and that kind of refocuses us on what we need to invest in.”

One point the Chancellors mentioned is that there has always been a level of respect for all parties involved in the proceedings before the court. Chandler recounted that during his tenure he tried not to admonish lawyers on the record and would do so in his chambers, because he didn’t want to affect anyone’s reputation and he wanted to maintain civility. He did say that he was concerned about losing this culture as the bar expands.

Williams asked McCormick if she had noticed any behavior from lawyers that gave her concern in terms of the way people conduct themselves in court. She responded that she did. She attributed this to the still growing community of lawyers coming into a very unique legal market, the intensity of the cases tried, and the fact that more cases are being tried.

“More cases going to trial has created more zealous advocates, not always in the best ways, and it’s resulted in some inefficiencies in the court,” McCormick said. “And so that’s something we can improve on. And certainly, we can do our best to aid in that process by making our expectations clear, particularly for non-Delaware attorneys, so that Delaware attorneys can promulgate the message elsewhere,” she said.

She also urged the legal community to reinforce the virtues of the culture of the court in a post-pandemic world. She said when the Chancery Court reunited after the pandemic they viewed it as an opportunity to reaffirm values and focus on them. McCormick challenged others to do the same and mentor young attorneys and continue to host events like the Weinberg series, which provide continuing legal education.

The Chancellors’ talk was followed by two roundtables focused on recent developments in Delaware law. The first featured a panel of lawyers who discussed the 2019 case, Marchand v. Barnhill, in which the Delaware Supreme Court allowed a Caremark claim (which allege failures of board oversight) to proceed against a board of directors for improper oversight of the company’s business. As a result of that case, the Chancery Court has considered several motions to dismiss high profile cases alleging that a public company board of directors failed to exercise oversight duties. One case lawyers on the panel discussed was the $237.5 million settlement by the Boeing company after shareholders sued the company’s board of directors for failing to take safety as seriously as they should have after two fatal 737Max crashes.

Roundtable participants included Joel Friedlander, a partner at Friedlander and Gorris, Meredith Kotler, partner at Freshfields, Brukhaus Deringer, and Blake Rohrbacher, director at Richards Layton and Finger. The panel was moderated by Rolin Bissell, partner at Young, Conaway, Stargatt and Taylor and a member of the Weinberg Center’s Advisory Board

The second roundtable featured lawyers discussing two recent Delaware issues emanating from  Chancery Court decisions. The first related to special committees in the context of controller transactions and the second involved special purpose acquisition companies (SPACs) and a recent decision by the court  not to dismiss stockholder litigation over de-SPACing transactions, in which the Court was critical of the process followed and the disclosures made to the stockholders and the lack of certain disclosures. Lawyers discussed what role special committees might play to mitigate risk in a new era litigation.

Participants included Patricia Vella, partner at Morris, Nichols, Arsht and Tunnell, Mark Lebovitch, partner at Bernstein, Litowitz, Berger and Grossmann, and Michael Barlow, partner at Abrams and Bayliss. It was moderated by Jennifer Voss, partner at Skadden, Arps, Slate, Meagher and Flom and a member of the Weinberg Center Advisory Board.

“I think this was a really high-quality program with incredibly distinguished speakers, and that they gave a view of the Chancery Court, which was unique,” Klein said. Of the program, he also said he hoped guests walked away understanding that there have been very significant developments under Delaware law.