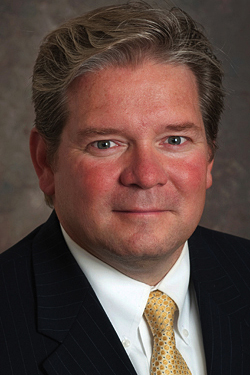 Dr. Matthew J. Robinson is a full professor and the Area Head of the Sport Management Program in the Lerner College of Business and Economics at the University of Delaware. Dr. Robinson is the author of the highly successful sport management texts: Profiles of Sport Industry Professionals: The People Who Make the Games Happen  and Sport Club Management and has authored over 25 articles and has  made over 100 national and international scholarly and professional presentations. In 2020, Robinson was named to the President’s Council on Sport, Fitness, Sports and Nutrition Science Board for The United States of America Department of Health and Human Services and also served as the President of the University of Delaware Faculty Senate.

Dr. Robinson served as interim Director of Athletics and Recreation for the University of Delaware during the 2016 Spring Semester. Robinson oversaw a $29 million budget, over 600 student athletes and 200 staff members.  Under Robinson’s leadership two teams earned CAA conference titles, and the Women’s Field Hockey Team won the NCAA Championship the semester after he completed his interim duties. During his time as Director of Athletics, Robinson conducted a Title IX review of the department and initiated three separate initiatives directed a increasing departmental revenues through increasing donations and season ticket sales and enhancing the spectator experience at home athletic events.

Since 2008, Robinson has served as the Chairman of the Delaware Sport Commission (DSC) which was founded in 2009 for the purpose of attracting, regional, national and international sporting events to the state of Delaware for the purpose of economic development. In its twelve years of existence, the DSC has successfully landed national events for the state including the NCAA Women’s Basketball and Men’s Lacrosse Championship first rounds; exhibition games for the 2018 USA Women’s Olympic Basketball and 2016 US Women’s National Basketball teams as well as multiple regionally-focused events. The DSC also spearheaded the efforts for the feasibility study and ultimate funding and building of a $24 million 84-acre 12 field turfed multi-sport facility. In 2004, after a ten-year absence, Robinson revived the Slam Dunk to the Beach High School Basketball Tournament. Through a campaign to repair the brand with the local business community and state and local governments, the event annually generates over $1 million in economic impact for the Delaware beach community during the month of December.  The event has also garnered national media and social media attention for the state, for players in the event have included McDonald’s All Americans who have gone on to the top college programs in the country as well as the NBA. All combined, DSC efforts have led to over $80 million in economic impact for the state.  Robinson also serves on the Board of Directors for the Philadelphia Sports Congress.

On sabbatical from the University in 2007, Robinson served as the Muslim Sport Coordinator for the United States of America Department of State. Prior to that appointment during and after, Robinson implemented US Department of State funded projects in Turkey, Senegal, India, Jordan, China, Palestine and Qatar and partnered with the NBA, NFL and the Sport Ministries and US Embassies in those countries.

In 2005 Robinson developed the Director of Coaching Curriculum for the National Soccer Coaches Association of America (NSCAA) now United Soccer Coaches.  Since its inception, the course has been offered to over 2,500 soccer administrators and coaches in 23 different states.  In 2012, United Soccer Coaches collaborated with UD in the offering of the Master Coach and Soccer Leader certificate program.