Artificial Intelligence and What Makes Us Human 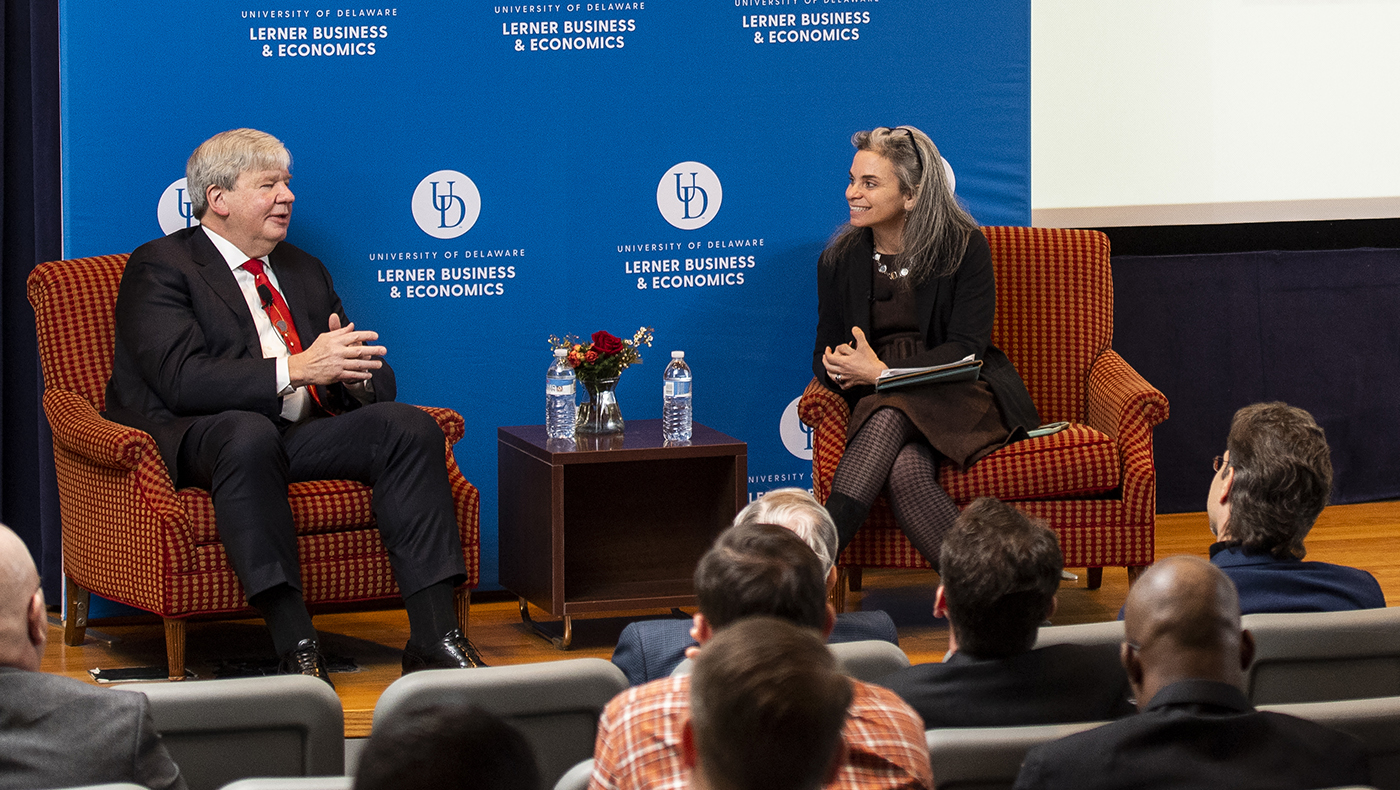 When you think of artificial intelligence (AI), the first things to come to your mind might be computer science, robotics and other technical terms. According to Ray Quinlan, though, you must also consider some concepts that might surprise you, like empathy, culture and what it means to be human.

Quinlan, who is chairman and CEO of Sallie Mae, discussed AI as the keynote speaker at this year’s MBA Students Association (MBASA) Conference, organized by MBA students at the University of Delaware’s Alfred Lerner College of Business and Economics. The conference explored the ways that AI technology will shape the business world of tomorrow. Before attendees could learn about the future of AI, though, Quinlan shared interesting stories about its past and present.

This began with a timeline of AI throughout history, starting with computer scientist Alan Turing and his work cracking the German Enigma Code during World War II, which saved countless lives. The way Turing was able to do this, Quinlan said, comes down to much more than just math and science.

“How do we decrypt? What’s the problem we’re trying to solve?” Quinlan asked. “Someone wrote that code. When they wrote it, they were trying to deceive me. So, whoever wrote it had a thought about how I think.

“So now we’re talking about something that starts as a code and turns into a person,” he continued. “A person wrote it; I have to have empathy with that person. Not in an affectionate sense, in a way of understanding how that person does things… That’s about humanity.”

Quinlan also discussed Turing’s famous Turing test, which states that any machine that can trick 30% of people into believing that it is human has passed a fundamental step in the world of AI. In developing the test, Quinlan said, Turing asked questions like: How do we make decisions? And what is intelligence?

“What are we trying to do in AI?” Quinlan asked. “We’re trying to take your intelligence, a person’s intelligence, and put it into the machine so that we have a replicable item that can then grow an intelligence on its own and get the best of both worlds.

“So, take your intelligence, any one of you individually, and I want to put it into machine,” he continued. “How do I do that? How do you think? How do you reach your conclusion about anything? Can you write it down? Can you put it in an algorithm? What portion of your thinking do you think you could write down?”

In studying this, Quinlan explained, we discover a fundamental problem: “The problem with AI isn’t that we can’t get AI to do things. We don’t know how we do things.”

But we have made significant progress: 64 years after the creation of Turing’s test, in 2014, a robot named Eugene fooled 30.6% of an audience into believing it was human. Sadly, Turing did not live to see his test passed. In 1952, Quinlan explained, Turing was arrested for being in a relationship with another man. He was forced to undergo chemical castration and took his own life two years later. This, Quinlan said, is an important reminder that, “We also have to worry about culture.”

“[Turing] was a man who was the most technologically advanced person,” Quinlan said. “He lost his clearance; he lost his job. I mention this because he’s so outstanding on the technology side and such a victim on the cultural side.”

If students keep in mind these important sociological issues that impact the world of AI, Quinlan continued, they can better understand what the future of AI looks like. A key part of this future includes figuring out what AI-related services customers will actually want and use.

“You tune them into customers better and better with more attributes, and as long as the customer wants those attributes, you keep moving up the chart,” Quinlan said. “But then sometimes, people come along and say, ‘These things, I don’t really need.’”

He then posed a question: “How many people think they use 100% of what your phone is capable of?” Nobody in the audience raised their hand.

When customers reach that point, Quinlan continued, companies who are spending too much money to increase the number of attributes go out of business, and those who come in later with fewer attributes succeed. Deciding which AI-related services to include in a business model is a difficult choice, Quinlan said, but companies in today’s world must not ignore it. If they do, he explained, they risk losing money or going out of business altogether.

This illustrates that, when it comes to considering technology and AI to succeed in business: “You have no choice. It can’t be ignored. It can’t be put aside. It has to be co-opted in a positive way.”

In another example of a current AI topic that incorporates more universal questions, Quinlan discussed autonomous vehicles. While self-driving cars have recently made massive bounds in viability, the deeper issues they face involve the famous philosophical Trolley Problem: You are watching a train barrel down the track, and if it continues on this path it will hit and kill five people. You can pull a lever to divert the train to a track with one person on it. Do you do nothing and allow the trolley to kill the five people, or do you pull the lever?

When Quinlan asked this question during his presentation, many audience members did not want to raise their hands, which is a common response. Human uncertainty about how to handle this situation ethically, he said, means that it’s hard to know how to program autonomous vehicles that will have to decide whose life to prioritize.

“We don’t know what we want that car to do in that circumstance, and it will happen,” Quinlan said. “There’s no doubt about it. This isn’t the future. This is today… And we don’t have a settled view of ethics in order to program that machine. It’s a scary thing.”

Thankfully, he continued, sometimes incorporating AI-related technology is simpler and more straightforward. At Sallie Mae, for example, the company introduced a chat function for their customer service team, which receives about 20 million phone calls a year. They learned that an employee can help customers approximately 2.4 times faster when using chat instead of a phone call, and customer satisfaction also increased from approximately 77% to 95%.

This seems like a straightforward win, Quinlan said. However, he explained, the company will never move to 100% of its interactions being chat-based.

“It’s never one or the other,” he said. “Make it easy for them, but they have to have choice. People don’t like when you take things away… We have to start with the customer and end with the customer.”