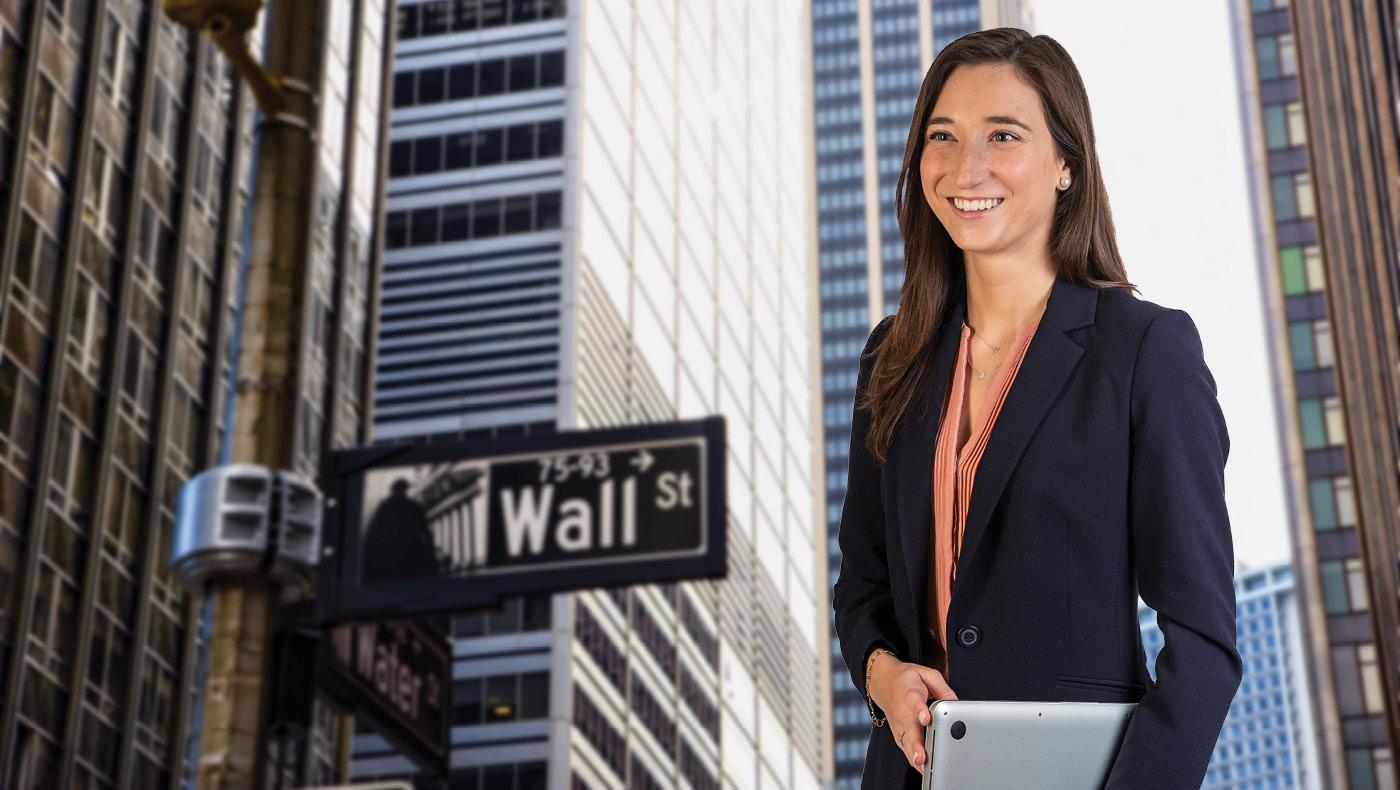 “I’ve always had this personality where I’m never satisfied with where I currently am,” said Kerry Schwartz, a senior finance major with a minor in international business studies at the University of Delaware’s Alfred Lerner College of Business and Economics. “I went to Hen Hatch, I started an organization on campus, all because I want to leave some sort of a trail of impact wherever I go. That’s basically just driven me through college, thinking that I’m at this huge school with more than 18,000 students, and I want to make sure that when I leave there’s something positive left behind.”

Schwartz came to UD from Pound Ridge, New York, four years ago, intending to study political science as her first step towards becoming a lawyer. After starting down this path, however, Schwartz said that she realized that it wasn’t her true passion. She declared finance as her major at the start of her sophomore year, and started on a new path that would lead her all the way to Wall Street.

During her sophomore year, Schwartz earned an internship at a major financial firm in Wilmington, where she was working more than 20 hours a week while also taking a full courseload. Sometimes she would travel back-and-forth to the office, a 25-minute drive each way, twice a day. Schwartz said that she accepted this challenging schedule head on because she loved finance and knew that this could lead to even greater opportunities. It paid off, she was able to transfer to the firm’s office in Manhattan, where she found that her passion was working in New York for a major financial firm.

With a new path in mind, Schwartz began to search out every opportunity available at the Lerner College to bring her closer to the goal of finding a job on Wall Street after graduation. Through the Lerner’s Career Services office, she joined the Executive Mentoring Program and Lerner Careers on Wall Street program. Her executive mentor, a division head at a major investment bank, worked to help Schwartz develop interview skills and identify the right jobs to reach her career goals. Through the Lerner Careers on Wall Street program, Schwartz was able to meet with members of the NYC Deans Council, including the Chair of the Council Ed Sannini, in Manhattan.

“That was really great because now I have all of these great connections and resources that I can utilize when I am in the city,” said Schwartz. “To be able to use these connections, and maybe someday even work with these people that I met through the Lerner Careers on Wall Street program, is wonderful. I hope that I can stay in contact with members of the NYC Deans Council. Maybe someday I can even be on it in the future and be able to give back to UD.”

At the same time that she was looking for opportunities to help achieve her career goals, Schwartz always kept her personal goal of leaving a legacy at UD in mind. Schwartz now considers founding the Women in Finance (WIF) club her greatest accomplishment at UD.

“Founding WIF really helped me because it was an accomplishment where I was able to leave something for UD and help the women around me to succeed,” Schwartz said. “I’m extremely proud of that because, for the future, there is this club that I can’t wait to see how many other people have helped and how the club grows.”

With these experiences under her belt, Schwartz set her eyes towards one of the most competitive and coveted jobs for finance students, a job at a top Wall Street financial firm. Once again, she looked to Lerner Career Services for resources to help her stand out to Goldman Sachs.

“For students like Kerry, who are looking to get jobs at companies that don’t actively recruit at UD, Lerner Career Services will work to identify different connections and opportunities,” said Jill Pante, director of the Lerner Career Services Center. “Students can use these resources to help them get in the door and make an impression at places like Goldman Sachs and other major Wall Street firms.”

Pante put Schwartz in contact with a UD alumnus who was working at Goldman Sachs. This alumnus was very supportive and transparent, which Schwartz credits with helping her feel confident and calm enough to nail her interviews.

Schwartz will graduate in June, after which she will move to Manhattan to start her job as a risk management analyst at Goldman Sachs. She says that for the first time, she feels content with where she is in life, and no longer feel pressure to seek more.

“A motto that I live by is that, no matter what you do, you should always put yourself out there and go after the big goals, the ones that seem like they are never going to happen, because the worst that could happen is that someone says no to you,” Schwartz advised. “Then you are just back to where you started and can try again.”

She continued, “So, there is really no harm in going after these goals that seem completely unattainable because you might hit a lucky win, even when you think there’s no chance. That is definitely the advice that I would give to anyone: Just go after the unattainable, because you just might be able to get it!”