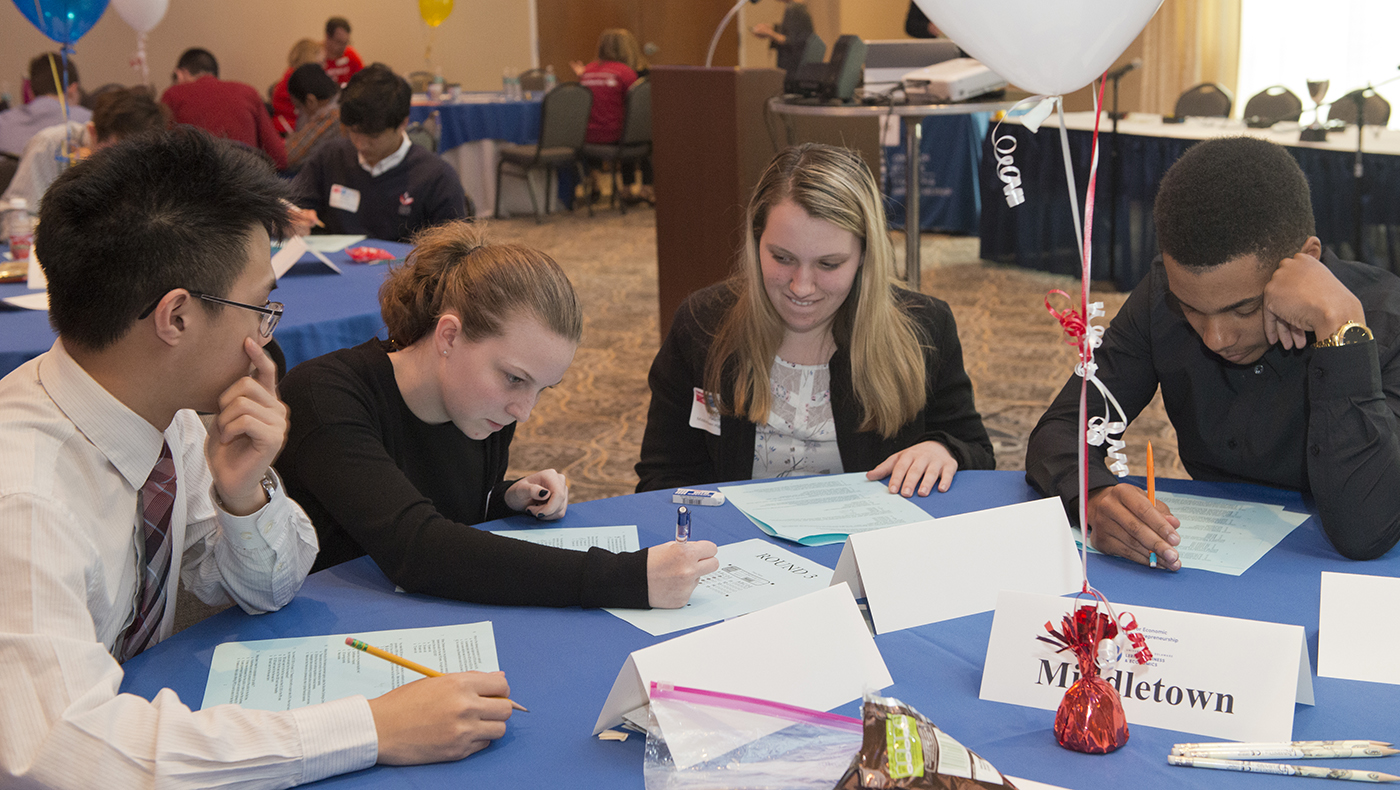 For the 11th year in a row, high school students from across the state of Delaware gathered to compete in the 2019 Personal Finance Challenge (PFC) finals. The competition tests students’ knowledge on topics ranging from investing to using credit to insuring assets. This year, over 80 students and their teachers competed in the hope of taking home a state title and a cash prize.

In order to compete in the PFC, students must be enrolled in a personal finance course or a related business course. Many of the qualifying teams come from classrooms in which teachers are using the Keys to Financial Success curriculum. A joint development effort between the University of Delaware’s Center for Economic Education and Entrepreneurship (CEEE) and the Federal Reserve Bank of Philadelphia, this personal finance education program is designed to develop the critical thinking, problem-solving and decision-making skills that high school students need “to make sound financial decisions and manage their own personal finances,” according to program literature.

“As a group we recommended to each other additional online resources that we could use to prepare for the competition, as well as reviewing what we learned in class,” said Rohan Kanchana, member of Newark Charter School’s first place team.

“Another important way that we prepare for the competition is by using the resources that are provided by the national Personal Finance Challenge website,” said Christine Orzechowski, the winning team advisor and a Class of 2019 graduate of the CEEE’s Master of Arts in Economics and Entrepreneurship for Educators (MAEEE) program. “We also use quizlets to review. These students are just all-around awesome kids who engage in a lot of self-study and self-preparation that I can’t take credit for. And the teaching team that we have at Newark Charter consists of some awesome econ teachers, so our success is truly a team effort.”

After completing an online testing round of competition, each participating personal finance teacher selects up to four qualifying students who then form a team to compete in person at the state PFC finals. The stakes for the competition are high, as the state champion team members and their teacher each receive $500 in cash prizes; the second place team members and teacher each receive $250.

“Noah Rossi and I competed here two years ago in 10th grade, advancing to the state finals. We actually placed second,” said Hannah Kim, another member of Newark Charter School’s first place team. “We both wanted to do it again because we loved the experience we had then. Since our previous team members had since graduated, we needed to find two new members who could take their place. My friends Sarah Ho and Rohan were both passionate about business and enjoyed personal finance education, so we recruited them to join our team.”

The PFC competition consists of four rounds of rigorous competition, abbreviated by tension-relieving rounds where students play trivia and compete for smaller prizes. The first three rounds of the competition employ written tests focusing on topic areas including earning income, protecting and insuring assets, using credit and buying goods and services, saving and financial investing. The two top-scoring teams after those three rounds advance to the final quiz bowl round where they vie to be the first to the buzzer and correctly answer questions from any of the previous topic areas.

“The quiz bowl is my favorite part,” said Ryan Conner, senior vice president at Bank of America and PFC volunteer of 10 years. “The kids responding under pressure, that prepares you for life. Financial literacy is one of the most important things kids need to learn in school. It’s an area of study that schools should and are committing to. It’s something I’ve been personally committed to for a long time.”

“It was super nerve wracking, right up until the end when we were buzzing before the question had even finished being read,” Rossi explained. “We came so close [to winning] before, so I feel, I don’t want to say relieved, but it’s like a sense of closure. We could have done better before, but now we’ve finally done it so that’s super exciting.”

“I am really proud of these guys. This is our third year in the competition,” Orzechowski added. “The first year we made it to quiz bowl and came in second, which was great. Last year we came in third, missing the final round by just one point. So this year we were really hoping and were really, really excited, and I’m super proud of them.”