Examining the gender deficit in business 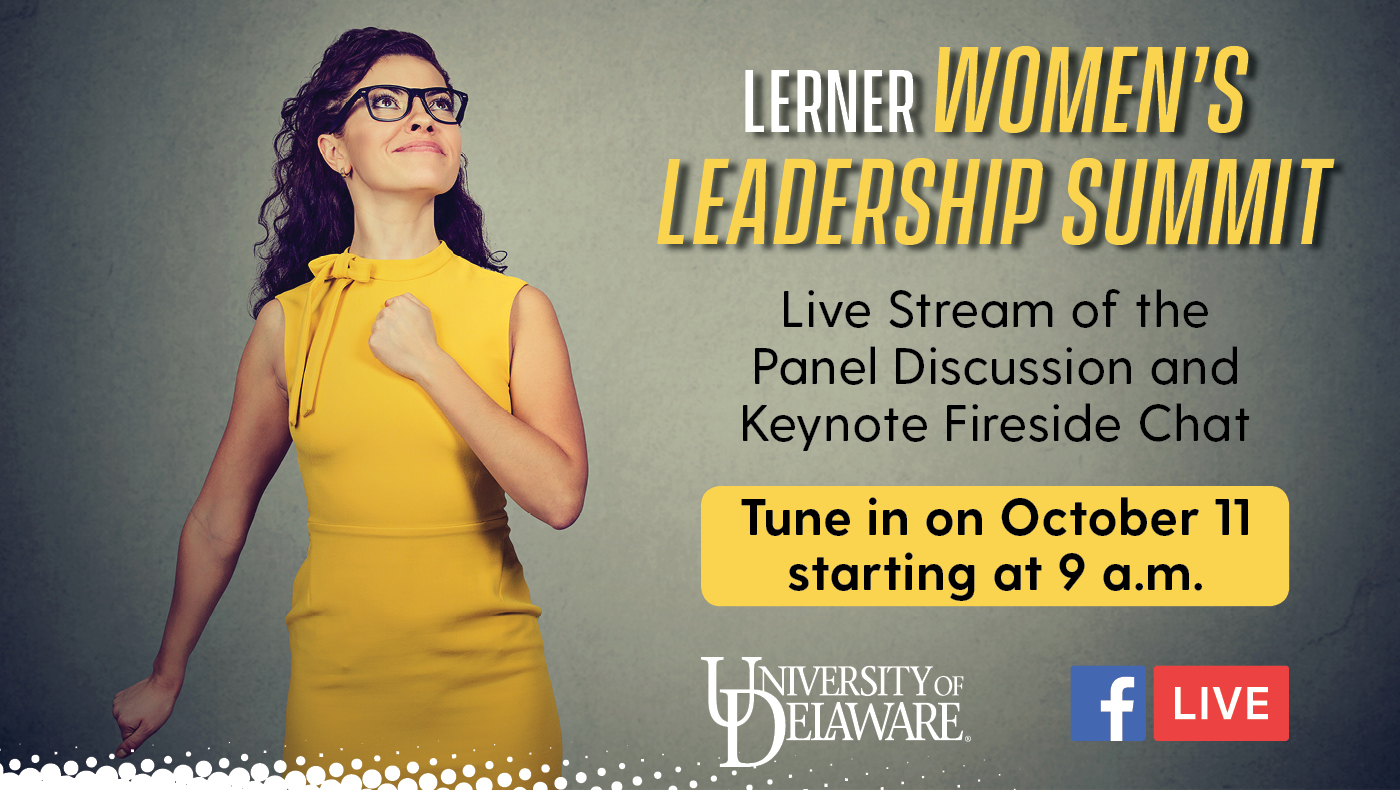 It has been 129 years since Anna Bissell became the first American female CEO, 98 years since women were granted the right to vote in the United States and 46 years since Katharine Graham became the first female CEO of a Fortune 500 company. Yet fewer women today than in the past are leading the world’s largest companies, and the number of female chief executives has fallen.

Enter the Women’s Leadership Initiative (WLI) at the University of Delaware’s Alfred Lerner College of Business and Economics. According to co-director Amanda Bullough, WLI was created because, “There is a gender deficit in the upper echelons of pretty much all organizations, across the U.S. and around the world. The more women advance in their careers, the fewer and fewer other women they see around them.”

This October, the Lerner College’s WLI is exploring how to galvanize the growth and lower the deficit by engaging executives, students, staff, faculty and alumni around the region with a Women’s Leadership Summit on October 11 and Women’s Leadership Forum from October 17 through 19. The summit will invite students, staff and faculty to learn about the successes women have achieved in leadership, the challenges that women face as they work toward leadership positions and what UD and the Lerner College are doing to address this. The forum specifically serves women executives, and provides leadership development training.

Since the WLI began in 2017, it has already made an impact: Approximately 30 percent of past forum participants have been promoted or changed jobs in their organization after completion of the program. Business leaders from major companies like Google, Verizon and more will be participating in this inaugural year of the WLI Summit, which hopes to bring similarly positive results to a larger audience.

UD alumna Tamara Ganc ’94 , the Global Head of Learning Design & Innovation at Google, is the WLI Summit keynote speaker. She hopes to impart lessons from her experience on WLI participants. “It’s not lost on me that my last two big promotions were given to me by successful and inspiring women in positions of power,” said Ganc.

“They pushed me, coached me, and when it mattered, advocated for me,” Ganc continued. “I’ve personally benefited from being surrounded by strong women that care deeply about developing other strong women. Now, I want to be that leader for others, and my goal of the keynote is to build an army of emissaries willing to join me on that journey.”

The WLI is actively working to help participants of both the forum and the summit to “learn, connect and advocate” for women’s leadership and gender equity. Beyond the benefits to women seeking leadership positions, a shift in the current trend of women in business could have a significant value for those companies who make a significant change: “Companies with 50% women in senior operating roles show 19% higher return on equity (ROE) on average,” according to the Women in the Workplace 2017 report from McKinsey & Company.

Throughout its programming, WLI works to model a culture of equity and inclusion, being open and geared towards all genders. “I hope that plenty of men attend and feel encouraged to get involved in the Women’s Leadership Initiative,” Bullough said. “We should not only be speaking to each other as women. All genders are needed in order to advance gender equity and opportunity for women in leadership.” This year’s summit will include breakout sessions focused on men and gender equity, and includes two male panelists in the introductory panel. This type of inclusion allows for people of all genders to work together to advance gender equity in the workplace.

About the WLI Summit
More than 200 students, faculty, staff and regional business leaders will be attending the sold-out inaugural Women’s Leadership Summit, which features sessions throughout the day at the Gore Recital Hall on UD’s campus. For those unable to attend the summit in person, two of the sessions will be livestreamed beginning at 9 a.m. on Oct. 11 through Facebook Live.

The Summit begins at 9 a.m. with a panel discussion, moderated by Sharon Kelly Hake the chief executive officer & president of Great Dames, featuring:

The panel will be followed by a keynote fireside chat at 10:30 a.m. with Ganc, which will be moderated by Grace Leong ’88 the Chief Executive Officer & Partner at Hunter Public Relations.

“My career has predominantly been spent in male-dominated industries,” Ganc said. “This personal experience has led me to develop a strong passion for both gender equality in the workplace and building inclusive cultures in which women can thrive. So, when I was asked last year to join UD’s Women in Leadership Steering Committee, I couldn’t think of a better way to align around two things I love – UD (my alma mater) and women in business. I’m honored to be the keynote and help be a voice to this great cause.”

About the WLI Forum
Now hosting its fourth group of women’s leaders through the region, Lerner’s Women’s Leadership Forum aims to help mid-career women overcome obstacles and advance in their leadership. At the same time, it helps organizations improve the diversity of mid- and senior-level leadership teams, and provides organizations with a research-based women’s executive education program that complements their in-house leadership development programs. Participants emerge from the program prepared for for new leadership roles.

“The Lerner College facilitators have been a tremendous influence on me and my leadership role,” wrote Tara Simpson, organizational development manager at Beebe Healthcare and Fall 2017 Women’s Leadership Forum participant.  “I was able to learn so much about myself and develop the skills necessary to be an effective leader.”

The forum will take place from October 17 through October 19, and interested participants can apply via the forum website.