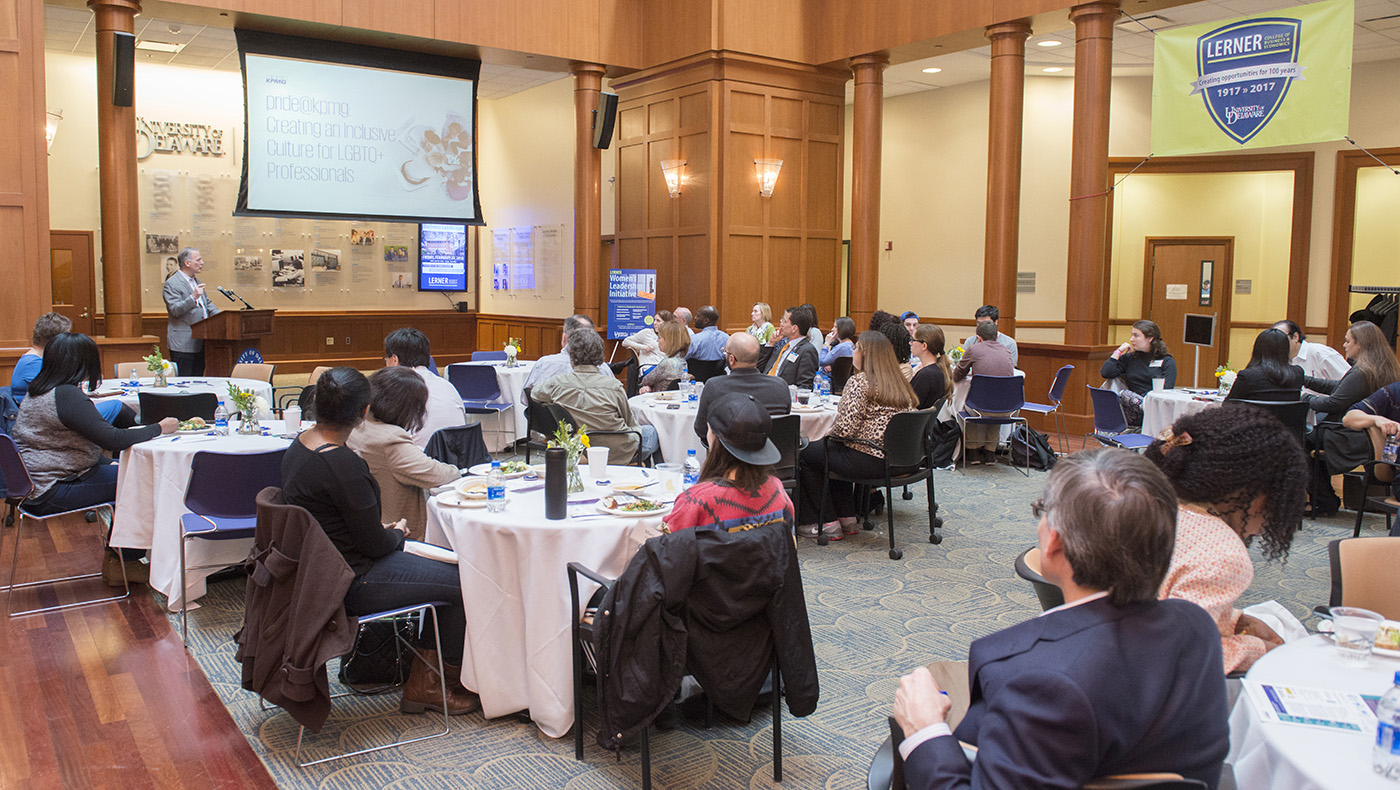 On February 23, the Lerner Diversity Council (LDC) at the University of Delaware’s Alfred Lerner College of Business and Economics raised awareness for LGBTQ allyship at a lunch-and-learn session for UD students, faculty and staff.

Exploring the LGBTQ Spectrum and Building a Supportive Community was sponsored and presented by KPMG, which was named the new founding corporate partner of the LDC earlier this year.

“Students are going out into a changing world, where people want unique experiences both in the corporate world and as consumers,” added Jennifer Joe, Whitney Family Professor of Accounting and Lerner’s chief diversity advocate. “Organizations such as KPMG are great examples of creating inclusive workplaces. If our students are accustomed to operating in that environment, they’re going to be successful when they enter the workplace.”

Speaker Michael Ebert, a partner in KPMG’s Philadelphia Cybersecurity practice, spoke about the company’s trailblazing work in fostering an inclusive environment for LGBTQ professionals, from offering health benefits to same-sex partners of its employees beginning in 1993 to developing signature events and programs that provide development opportunities and increase visibility of LGBTQ professionals in the workplace.

“Allyship is working to understand the needs of others,” Ebert said. “It’s a process that starts with asking questions to develop an understanding, which eventually leads to becoming an engaged member of the community.”

“We don’t expect everyone to be marching on Washington every single day,” added Lauren Simek, campus recruiter for KPMG. Actions like “actively being part of an organization or simply speaking knowledgeably and standing up for members of the LGBTQ community,” can make a difference, she said.

While KPMG has worked to position itself as an institutional leader of diversity and inclusion, its employees also play a critical role as allies for their LGBTQ colleagues. And so after Ebert’s presentation, attendees broke into groups to evaluate various workplace scenarios that presented opportunities to be an ally for LGBTQ co-workers.

“We related to our scenario, because it’s an issue that comes up in our workplace,” said one attendee of her group’s assignment, which involved hypothetical co-workers disparaging an upcoming diversity event. “We thought it was important to discuss, because we often hear people brush off diversity initiatives as a waste of resources.”

As the event concluded, Bruce Weber, Dean of the Lerner College, stressed the importance of the LDC’s work and the vital insights that the lunch-and-learn sessions provide.

“When we bring Lerner students, faculty and professionals together over such an important topic, it’s a worthwhile investment of our time and resources,” Weber said.

“The key takeaway is to realize that the flexibility and freedom we have in higher education can be used for so many good purposes, and this is one of them,” he continued, “spending time with colleagues and coming together to talk about issues we face in the transitional era we’re currently in improves the education we provide and the enhances the climate we work in.”