From High School Students to Entrepreneurs 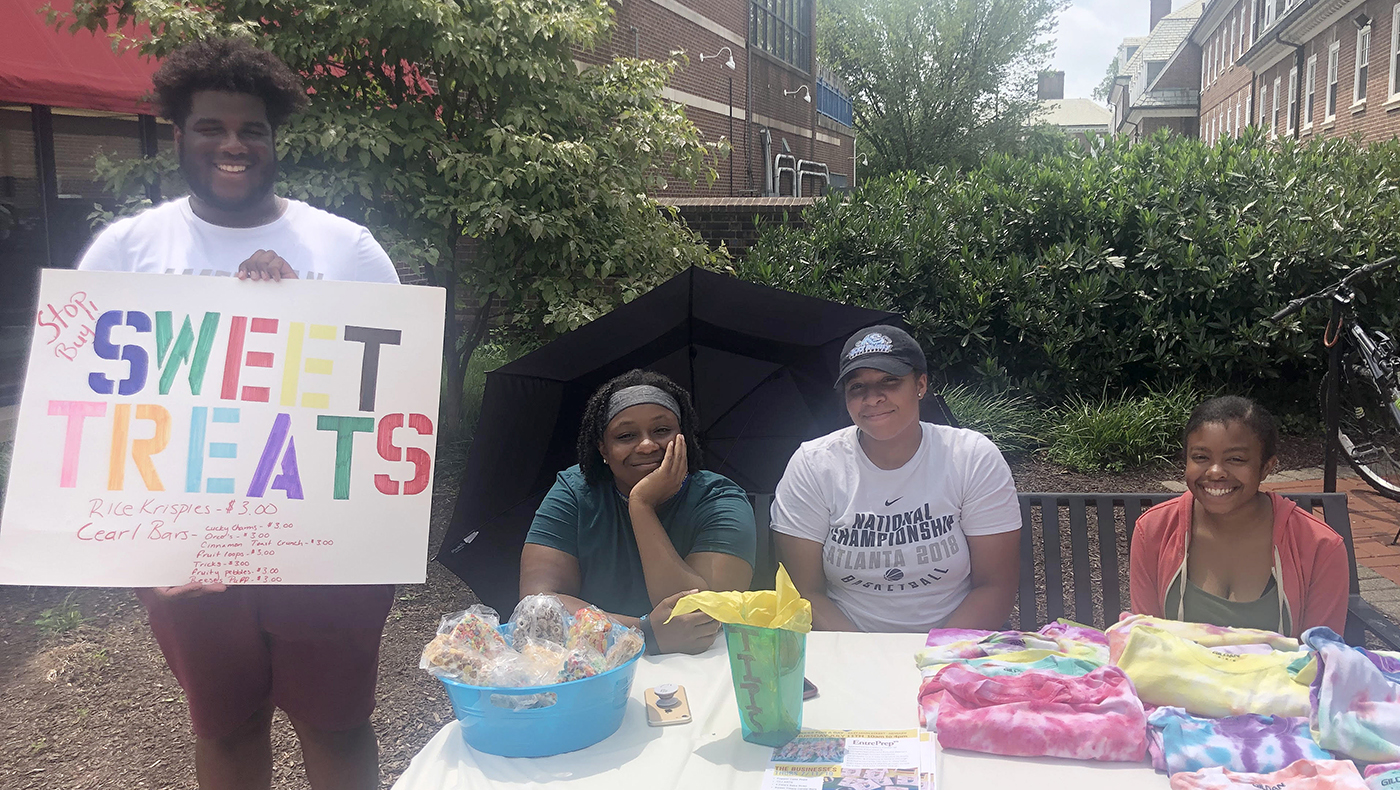 In just one week this past July, 17 high school students from Delaware and Pennsylvania moved into the University of Delaware dorms, learned lifelong lessons in financial literacy and became entrepreneurs by running their own business-for-a-day in various locations throughout Newark during the EntrePrep Summer Institute program.

EntrePrep gives high school students the opportunity to come to university campuses to learn about entrepreneurship and is developed around a hallmark Business-for-a-Day™ methodology. It operates at UD under the banner of the Center for Economic Education and Entrepreneurship (CEEE) at the Alfred Lerner College of Business and Economics and receives funding from Barclays, TD Bank and the New Castle County Vo-Tech School District.

This experiential learning program for students, innovators and early stage entrepreneurs supports the idea that entrepreneurship is beneficial and vital to creating transformative economic opportunity.

From Monday to Wednesday, students took part in entrepreneurship classes on the essentials of establishing and running a business. Lesson topics included examining students’ interests and skill sets, identifying a community need, creating a product or service that served that need, establishing a budget and obtaining the rights to operate. After learning the basics of business ownership, the students broke off into teams to devise their start-up strategies under the supervision of EntrePrep Director Carrie McIndoe.

“We meet them on a Sunday and they leave [on Friday] a different person,” McIndoe said. “The entrepreneurial mindset never leaves you.”

The student teams took over Main Street and other points on campus early on Thursday morning. Many of their enterprises focused on the business of doing good: giving back to the community through social entrepreneurship.

Kiana Frawley and Lucy Baker took their soap-making hobby to the next level by producing and selling various scented soaps. The inspiration behind their joint venture came from a trip Baker, a Penncrest High School student, and her family received as a gift from For Pete’s Sake, a nonprofit dedicated to sending cancer patients and their families on vacation. Frawley and Baker planned to donate 30% of their proceeds to the nonprofit.

“This program made me want to pursue running my own business in the future,” Frawley said. “It teaches you time management and how a business works, but it also encourages you to be independent while doing something you like.”

Trevor Duffy, Gabe Bey and Olufemi Olowere from Delaware organized a charity kickball tournament on the Harrington Turf in support of the Ronald McDonald house. They advertised their tournament to prospective players by administering flyers and posting on social media.

While running their businesses for a day, students received support and guidance from McIndoe and Nica Mayer, strategic initiatives director of the EntrePrep program. “We don’t tell them what to do,” said Mayer. “We allow them to make mistakes and learn from them, supporting them through the process.”

Delcastle Technical High School students Kahliel Nichols and Ma’Kennzie Castillo experienced this learning process firsthand. The two originally planned to organize a 5K race, but were unable to obtain the necessary permits from a nearby park on such short notice. However, this minor setback led to the creation of an alternative: Snack Back. The team used the snacks and drinks they purchased for the 5K as products for their new business and succeeded in the creation of a Main Street snack stand.

Stationed next to Snack Back were Delcastle students Chianna Spencer, Jameka Harmon and Taylor Scott, who used their mutual love of art as the foundation for their undertaking. After a lesson on feasibility, the team began brainstorming product ideas that they could design within the constraints of time and budget and that would capitalize on their skills and interests. This process led to the creation of ink paintings, decorative rocks and galaxy Mason jars sold under the name TCJ Arts.

“[Instructors] never said our idea was too hard or we couldn’t do it; instead, they helped us find a way to make it possible,” the team said.

Across the street from TCJ Arts, Brianna Deshommes, Feyisayo Ogundimu and Gharem Santos ran Poppin’. Using Deshommes’ previous experience in selling desserts to her Delcastle classmates, the group produced an assortment of cake pops and iced teas. Not only did the team provide Main Street with the delicious treats, but they also were able to deliver their products to other students residing on campus.

Located down the block were recent Hodgson Vo-Tech High School graduates Jaheim Harris, Korryn Braxton-Young and T’onna Saunders who also used their culinary background to create their venture: Sweet Treats, a business specializing in Rice Krispies Treats. This year was Braxton-Young’s fourth time attending, while it was Harris and Saunders’ second. The students worked to improve upon their business using lessons learned in previous years.

When it was all over, EntrePrep students had an opportunity to report on their growth at an end-of-week presentation attended by friends, sponsors and other community members.

“I love learning with these people,” Brooks said. “We go to class to understand the essentials and then get out there to run our own business.”

EntrePrep will return to campus in June, 2020. Students, parents and teachers can find more information on this residential, summer learning opportunity by visiting CEEE.