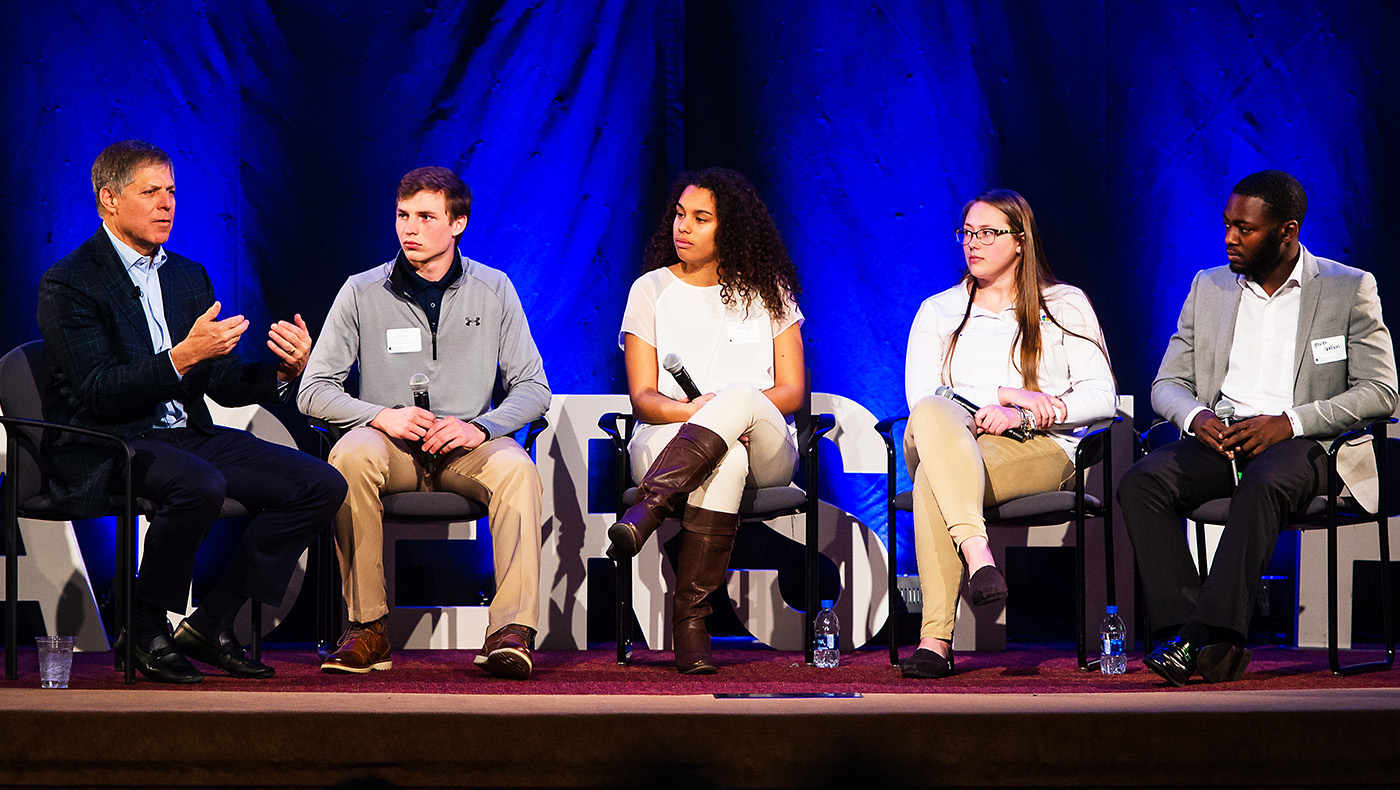 It’s not easy to get over 300 high school students excited to stand up to sing and dance on a Wednesday morning, but that is exactly what happened when speaker Jessie Funk took the stage at the Siegfried Youth Leadership Program (SYLP) on February 27.

Students and chaperones from 12 Delaware schools came to Clayton Hall at the University of Delaware for the 6th iteration of this bi-annual event. It all started when the daughter of Robert Siegfried, Class of ‘81, encouraged him to share his passion for leadership with his community. UD’s Alfred Lerner College of Business and Economics’ Dean, Bruce Weber, approached the Center for Economic Education and Entrepreneurship (CEEE) and asked if they would use their established connection with the Delaware K-12 community to assist Siegfried. With the support of his company, The Siegfried Group, Rob Siegfried’s vision was to host middle and high school students for a regularly scheduled youth leadership forum. The CEEE agreed, and with the addition of the Junior Achievement of Delaware as a partner, the SYLP was created.

Kicking off SYLP6, Siegfried’s close friend and trainer, Johnny Gillespie, founder of Empowered Yoga, said, “What impresses me about Rob is his heart. Three things I would like to mention about Rob. The first is his commitment to his own growth mentally, physically and spiritually. Commitment to his family. Commitment to the world.”

Siegfried then took the stage and throughout his talk, focused on the concept of character ethic words. Siegfried asked the students to write these words down as they were identified throughout the program. Some of the words that they noted included humility, love, ambition, care, intention, attention, honesty, kindness, truth, commitment, surrendering, awareness, listening, focus, generosity, respect, reliability and discipline.

“This idea of reflecting on what your dreams and ambitions are is just the start of the process,” Siegfried explained. “Developing character ethic is really, really hard to do. But I believe that if you want to be a successful person, you have to master character ethic, and that is a lifetime journey.”

Siegfried emphasized that the goal of this program is to help students to be more thoughtful and reflective about their thinking and feeling. To help them to identify, embrace and build values and character ethic. To utilize proven processes to develop individual leadership. The SYLP Higher Purpose is to help the community’s youth, to transform themselves into better individual leaders, enabling them to enrich their lives now and into the future.

After a short break, Siegfried took the stage again joined by a panel of students from the audience. He asked them all one question: What do you think you are going to be doing 10 years from now?

“In the next 10 years I want to be starting my own business in an inner city community because where I grew up there weren’t a lot of role models who looked like me and I want to be a role model for the next generation,” said Xavier Gadson from Concord High School. “The word perseverance really means a lot to me because my uncle owns a business and I know that there are a lot of ups and downs related to that…you have to really love what you’re doing.”

Carley Williamson from MOT Charter School followed Gadson, saying, “I think in the future I want to get into a mechanical engineering field. I’m really attracted to mechanical engineering because in 10 years I don’t really know what I’ll be doing and I like that it’s a very versatile field. I find that when I do the same thing over and over again I don’t grow as much.”

“I think in 10 years I see me having my own physical therapy practice,” said Zhaela Krause from Concord. “When people get hurt, their hope can be diminished, so I want to help them get back up and get that hope back.”

Mark Cruser from Concord had an engaging back and forth with Siegfried following his answer. Cruser hopes to be coaching baseball in 10 years. He said this is because he learned many of his leadership and teamwork skills from the sport, and would like to give back. Cruser stated that he believes the true value of leadership is being able to create more leaders, not merely followers.

When Cruser said in answer to a follow-up question that, as a leader, you have to put the team before yourself, Siegfried interjected saying, “Leadership isn’t putting yourself last necessarily. When it comes to your dreams, you need to put yourself first. There are times when you need to be selfish and follow what really motivates you.”

Then came the dancing. Singer and motivational speaker Jessie Funk explained that she started with a song because singing is what motivates her. Over the next hour, Funk engaged the students with stories from her life, more songs and audience participation, all tying into her overarching lessons about relationships and leadership.

“I’ve studied over 500 amazing people, the world’s most famous people. There are a few things they all have in common,” Funk said. “They choose to never allow toxic people to hold them back. The second thing is that they choose to forgive. That is wicked significant.”

Funk reiterated to the students over and over again in her presentation that they are worthy of happiness, worthy of success, worthy of their dreams and worthy because they breathe. She told them that they can be kind and strong at the exact same time and that personal leadership is just being the best version of yourself.

After Funk’s final song, the students moved on to lunch and reflection before heading back to their schools for the day. The conference will be back on UD’s campus in October 2019 to reach even more local students with Siegfried’s lessons in leadership.