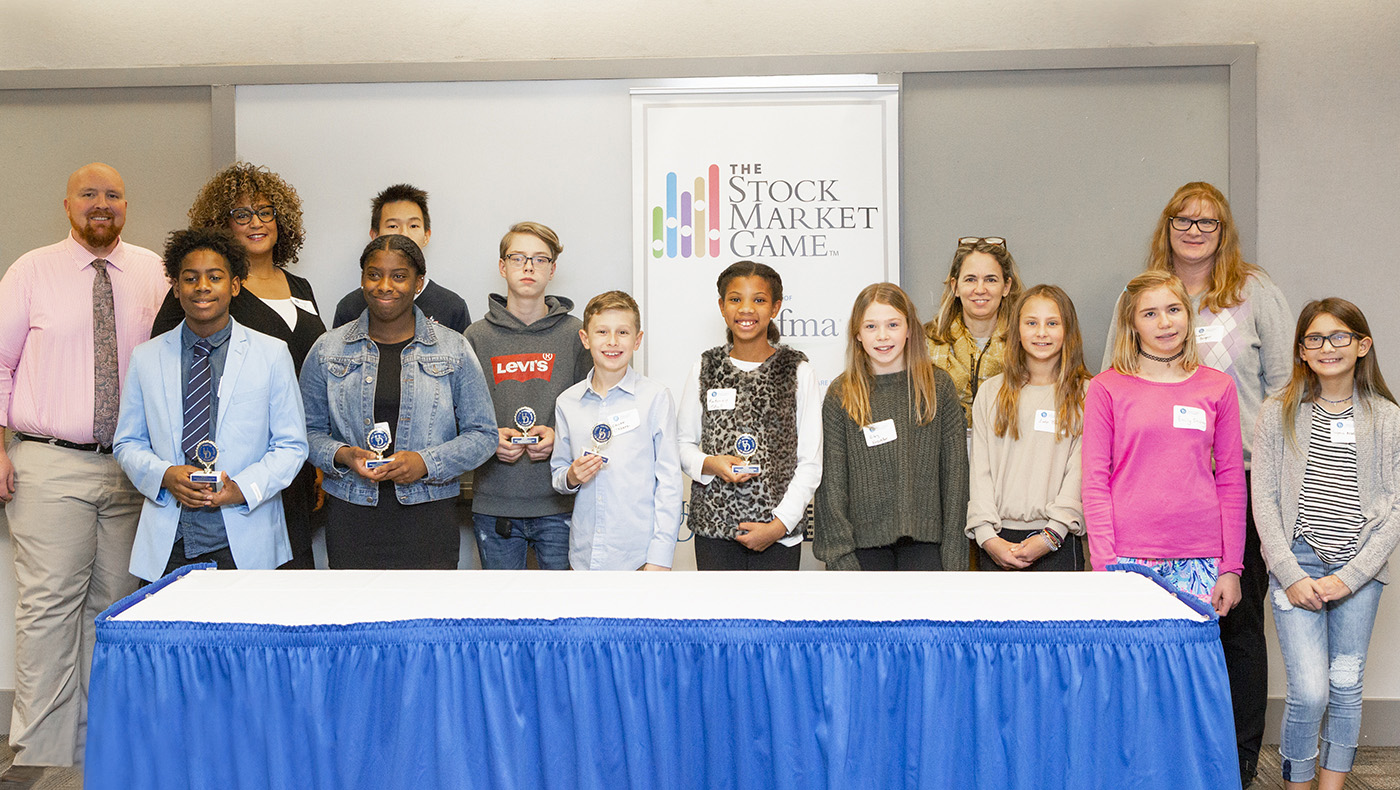 Students from schools across the state of Delaware were recognized at the Stock Market Game (SMG) awards reception on Tuesday, January 14, 2020 at the University of Delaware. A program of the SIFMA Foundation, SMG is funded by the Delaware Department of Justice’s Investor Protection Unit, with support from WSFS, and offered by UD’s Alfred Lerner College of Business and Economics’ Center for Economic Education & Entrepreneurship (CEEE).

In the SMG, students learned about the stock market, then research stocks themselves, in order to make selections for their portfolios. The winning teams from each grade level were those that had the highest money-value portfolios of the 1220 students who participated this year.

The first place team in the elementary division was from Brandywine Springs School and supervised by Heather Borgese. The team, comprised of Emily Shipley, Evelyn Bilek, Riley Alexander and Sophia Mancuso, ended the game with a portfolio valued at $108,288 with a return of more than 8%.

“This was our first time participating in this activity and we enjoyed it,” said one member of the team. “At first we were confused and didn’t really understand it but after a week we got the hang of it.”

The elementary division was incredibly close this year, with only $171 separating the first and second place teams. The second place team, from the Tatnall School, led their division until the very end of the game and therefore was also honored at the ceremony. Fourth graders Mackenzie Hill and Callan O’Keefe were able to end the games with a portfolio valued at $108,117 with the help of their teacher Heather Brooks.

“We went from 7th place to 1st place in four days,” the team said. “The stock that increased our equity was Tesla. My advice is to buy low and sell high. Thank you to our competition for making this an exciting game”

The first-place winning team in the middle school division was from Talley Middle School and included Keiona Davis, Deshawn Nitsch and Dallas Thompson. The team, led by their teacher Renay Mercer, had a portfolio valued at $117,262.

“At the beginning of the game, Dallas and Deshawn had this crazy idea of spending all of our money to buy stocks,” Davis said. “That was our first risk during the game, we bought all types of stocks to make our portfolio diverse. We decided to do that because we wanted to make sure that if something went wrong, some of the stocks reacted differently.”

Finally, the first-place winner from the high school division was Derek Cao from Newark Charter School. Cao’s portfolio was valued at $118,621 at the end of the SMG.

Cao’s teacher, Justin Miller, has had one of his student teams from Newark Charter win the high school division each year for four years in a row. When asked about the biggest takeaways from SMG for his students, Miller said, “It’s really exposure to how the market works, how a financial transaction works, how stocks work, and just the overall understanding. Several of my students over the years have come back to me after they graduated and said that they just got so into the financial part of the course, particularly the stock market game, and started majoring in finance, investing and things like that. So they’ve taken it and really compounded it into the future.”

Craig Weldon, chief special investigator for the Delaware Department of Justice’s Investor Protection Unit, presented the SMG trophies to the winning teams. Weldon commented on the impressiveness of this year’s teams saying, “Congratulations to all the students who participated. This is probably my seventh year of being here. And, I have to admit, this was the first year that I actually saw every team come in with a plan and execute that plan almost flawlessly.

“Keep doing this,” he continued. “Learn as much as you can take back as much as you can. And parents, encourage it, because it’s only going to make them better students in math, economics, politics, it encompasses every part of learning.”