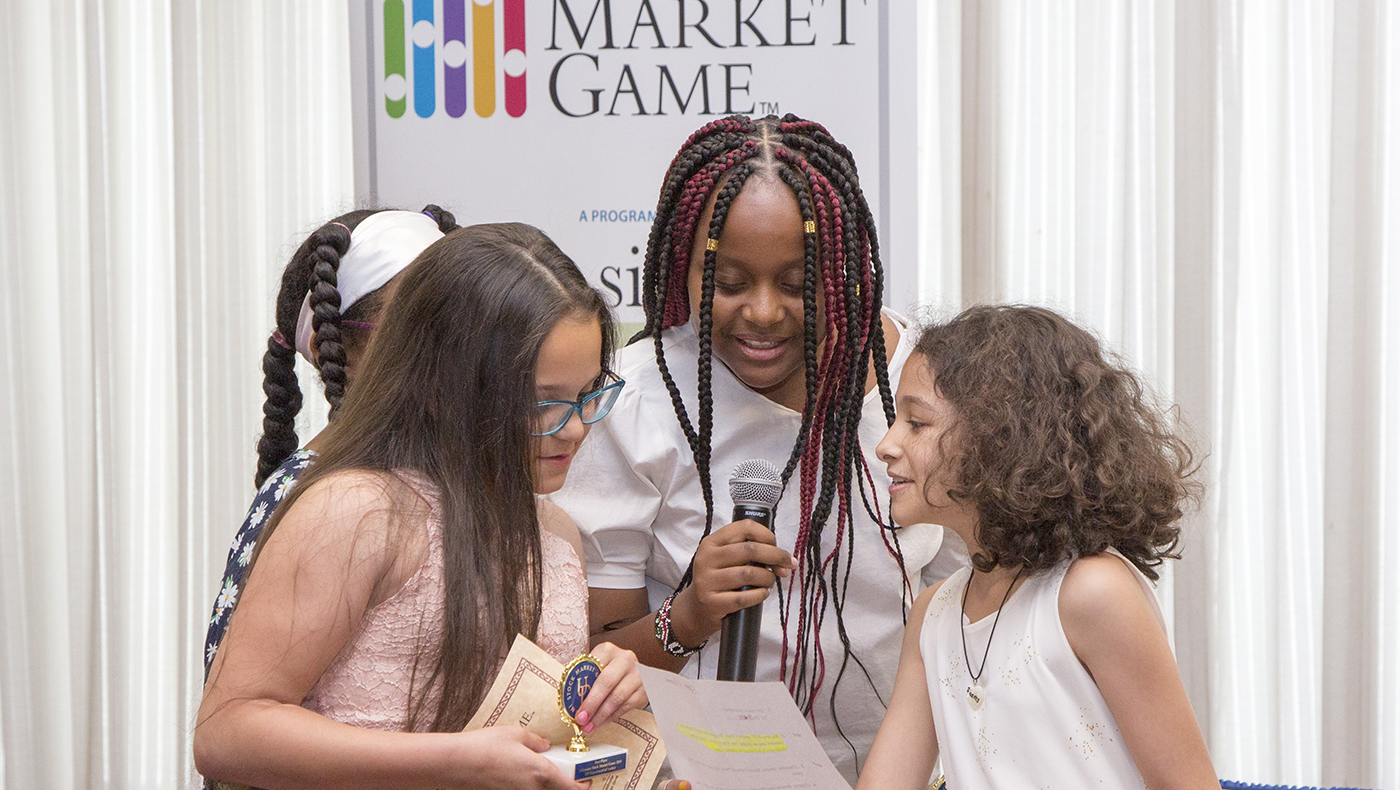 From February to May, more than 1,500 students in fourth through 12th grades diligently researched public companies and traded stocks as part of the Delaware Stock Market Game (SMG). Striving to build portfolios with the highest value, students tracked their daily progress against other competing teams within their grade-level divisions. This work proved successful in the end, when three teams had produced returns, not only higher than those in their division, but also higher than the Standard & Poor’s 500 Index (S&P 500).

The SMG is a 10-week simulation developed and administered by the Securities Industry and Financial Markets Association in New York and offered in Delaware schools by the University of Delaware’s Alfred Lerner College of Business and Economics’ Center for Economic Education & Entrepreneurship (CEEE). The program is funded by The Investor Protection Unit of the Delaware Department of Justice with support from WSFS.

A total of 413 teams participated in the Delaware SMG competition this spring. Each team was given a hypothetical $100,000 to invest in securities listed on the New York Stock Exchange (NYSE) and Nasdaq. Students researched public companies and their securities, entered trades on the SMG website at real-time prices and monitored the value of their portfolios. At the end of the 10-week game, the team in each of the three divisions with the highest portfolio value was declared the winner.

On Wednesday, May 22, the winners from each division of the Delaware competition were honored at the SMG Awards Ceremony hosted at UD. The awards were presented by Jillian Lazar, the Director of Investor Protection for the Delaware Department of Justice’s Investor Protection Unit. She congratulated the students on their hard work and interest in learning about the stock market. Along with recognizing the teams’ admirable returns, she emphasized the importance of the SMG in schools.

“[The SMG] teaches people as early as fourth grade to be thoughtful with what they do about their money,” Lazar said. “Financial literacy is the key to preventing fraud.”

The winning team from the fourth through sixth grade division consisted of fifth graders Zahara Ali, Shams Al-Moosawi, Destiny Gachanja, Saesha Gupta, Druhti Kapadia and Kaylani Sinohui from Thurgood Marshall Elementary School. Using their experience from playing in previous SMG competitions, the team made a return almost 5.5% above the S&P 500.

Although it was originally a risky decision to invest in Five Below, due to low real-time price, this turned out to be the team’s most successful stock and led to a portfolio valued at $110,942.

“Like a bouncy ball, stocks that dip down, often bounce back,” the team said during their award acceptance speech.

Elizabeth Braddock, Catherine Shapiro and Grace Towler from Springer Middle School won first place in the seventh through eighth grade division with a portfolio valued at $113,507.  The team used their knowledge of upcoming and popular products in order to determine which companies would be doing well in the future. After seeing an advertisement for a new flavor of Dr Pepper, they presumed the company would be receiving more attention and chose to invest in Dr Pepper Snapple Group. While the company did well for them, their most successful stock was in popular ski wear company Canada Goose. By investing in these two companies, the team made a return approximately 8% above the S&P 500.

Along with winning the SMG in the seventh through eighth grade division, team member Braddock also placed first in InvestWrite, a national writing competition that evaluates students’ understanding of the stock market’s role in the U.S. economy. All SMG participants throughout the country are invited to enter InvestWrite. Braddock wrote about the company Dominion Energy and their shared passion for slowing the effects of global warming.

“Dominion Energy is a company that does what it can to make the world a better place and by investing in it you are supporting that and creating hope for a better future,” Braddock said.

In the ninth through 12th grade division, Zachary Maucher, a senior from First State Military Academy, won first place with a portfolio valued at $114,321 by purchasing stock in Thermo Fisher Scientific Incorporated. He saw that they were starting to grow on the NYSE and further researched their financial statements in order to decide if this was the company he would invest in.

After seeing that the company reduced its debt by $2 billion in 2018 and increased its annual revenue by $6.5 billion, he chose to purchase a large quantity of its stock. This proved to be a successful approach when he exceeded S&P 500 growth by almost 9%. Maucher plans on using his knowledge of the stock market when he attends Delaware Technical Community College next year as a marketing major.

Marion Jacobs, CEEE’s Stock Market Game Coordinator, closed the ceremony by expressing confidence in the future of our economy based on the financial judgement of these students. Along with recognizing the students, she also thanked the parents for their support.

“We are also here to honor the parents of our students. Because parents, we know that it’s your encouragement, your support, that plays a very important role in your student’s success,” Jacobs said. “To teachers and parents, for all that you do for our students, we thank you and we truly applaud you.”