Teaching children to save early 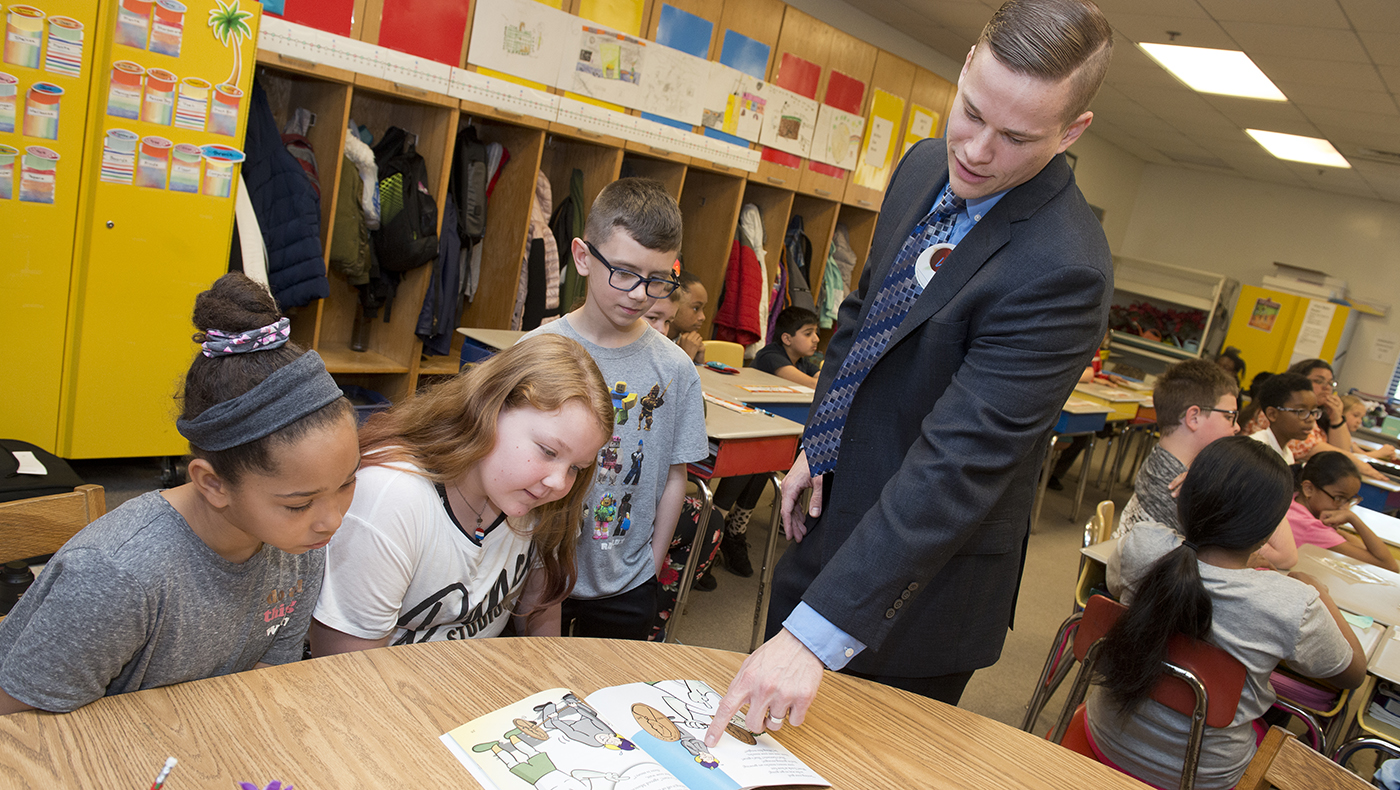 Until faced with their first bill or loan payment after high school, many people don’t give much thought to their personal finances.  Everet Zicarelli, internal audit manager at Sallie Mae and University of Delaware Class of 2012, experienced this when he first came to UD to study accounting at the Alfred Lerner College of Business and Economics.

“It really hit me like a wall when I got to college,” Zicarelli explained. “Like, ‘Hey, you’re on your own so figure it out.’ Financial literacy has been important to me ever since, mostly because these things weren’t talked about when I was in school. You had to either learn it on your own or hope that your family would teach you something about it. So, when I heard about Teach Children to Save Day at work, I was on board.”

Teach Children to Save Day, sponsored by the American Bankers Association (ABA), produced locally by the Center for Economic Education and Entrepreneurship (CEEE) in UD’s Lerner College and the Delaware Bankers Association (DBA), is one of many ways that the CEEE is working to ensure that students start learning these skills early. For one week in April each year, hundreds of bank volunteers like Zicarelli go to local Delaware classrooms to read a children’s book that encourages the lifelong habit of saving, teaches a short related lesson and prompts student discussion.

Delaware Governor John Carney signed a proclamation at Linden Hill Elementary School that declared the week of April 8, 2019 as TCTSD Week in Delaware. This year, over 300 classrooms statewide participated in the program, reaching over 7,200 third and fourth grade students.

“The Governor chose to sign the proclamation because it is never too early to foster healthy financial habits,” a representative from Governor Carney’s communications office said. “Being aware of saving at a young age will hopefully give children a leg up in their financial futures.”

For Zicarelli, volunteering for this year’s event was especially personal as he was returning to his former elementary school, Thurgood Marshall in Newark, Delaware. Armed with a lesson on the importance of saving money to reach goals, provided by the CEEE and the DBA with help from a grant from Capital One, Zicarelli approached the day with excitement.

“I did [the program] last year for the first time and I was a bit nervous going in, because a group of 25 fourth graders isn’t my usual audience,” Zicarelli said. “I visited a different school [not Thurgood Marshall Elementary School] last year, and the CEEE had developed a great lesson plan that really got the kids excited. Students had a great time and I had a great time, so as I walked out of there I couldn’t wait to do it again. When the opportunity came about to teach a lesson and I saw that a classroom at Thurgood Marshall needed a volunteer, it was a no-brainer for me.”

When Zicarelli walked into Karen Fredricks’ fourth grade classroom, the students’ eyes lit up. “I like for the students to hear from a community member in a career other than education,” Fredricks said. “This program provides the students with the opportunity to really understand the value of saving money for the things they want most. They follow the character in the book as he makes silly mistakes until learning the critical lesson about saving. I appreciate that I can reference the lesson in my class discussions for the remainder of the year.”

Zicarelli started his classroom visit by reading The Great Investo and Muscles O’Money, written by DBA’s Vice President of Marketing and Public Relations, Greg Koseluk.  Through a creative storyline, the book teaches kids how to get financially fit by setting goals, budgeting and saving. He then led the class in an interactive group exercise in which students applied the lessons from the story to the realistic example of saving their own money in order to buy a favorite toy.

One of Fredricks’ students, Aliyah Jackson, said, “My favorite part was probably when Muscles O’Money was training to have the most fit money and finances.”

Another student, Kayla Otto, added, “I think I will start saving more for college now because I know my parents will want me to.”

In Zicarelli’s experience, TCTSD benefits both the students and volunteers. It makes students aware of the vital role the financial industry plays in Delaware. As these students progress through their lives and careers, Zicarelli noted that there are a lot of opportunities for them in the financial services space.

Zicarelli shared that financial literacy is something that is going to affect everyone throughout their entire lives. As he said, “The sooner you can learn about it, the better. Bringing banking volunteers to the classroom,” he continued, “can strengthen the relationship between students and those financial service industries, hopefully fostering a lifelong relationship.”

Fourth grader Shane Bradley said he loved the lesson: “I learned a lot about how much I can really save.”

“It gave me a big sense of pride being back in my old school and just giving back to the school that gave me so much,” said Zicarelli. “I’ll definitely be back next year.”