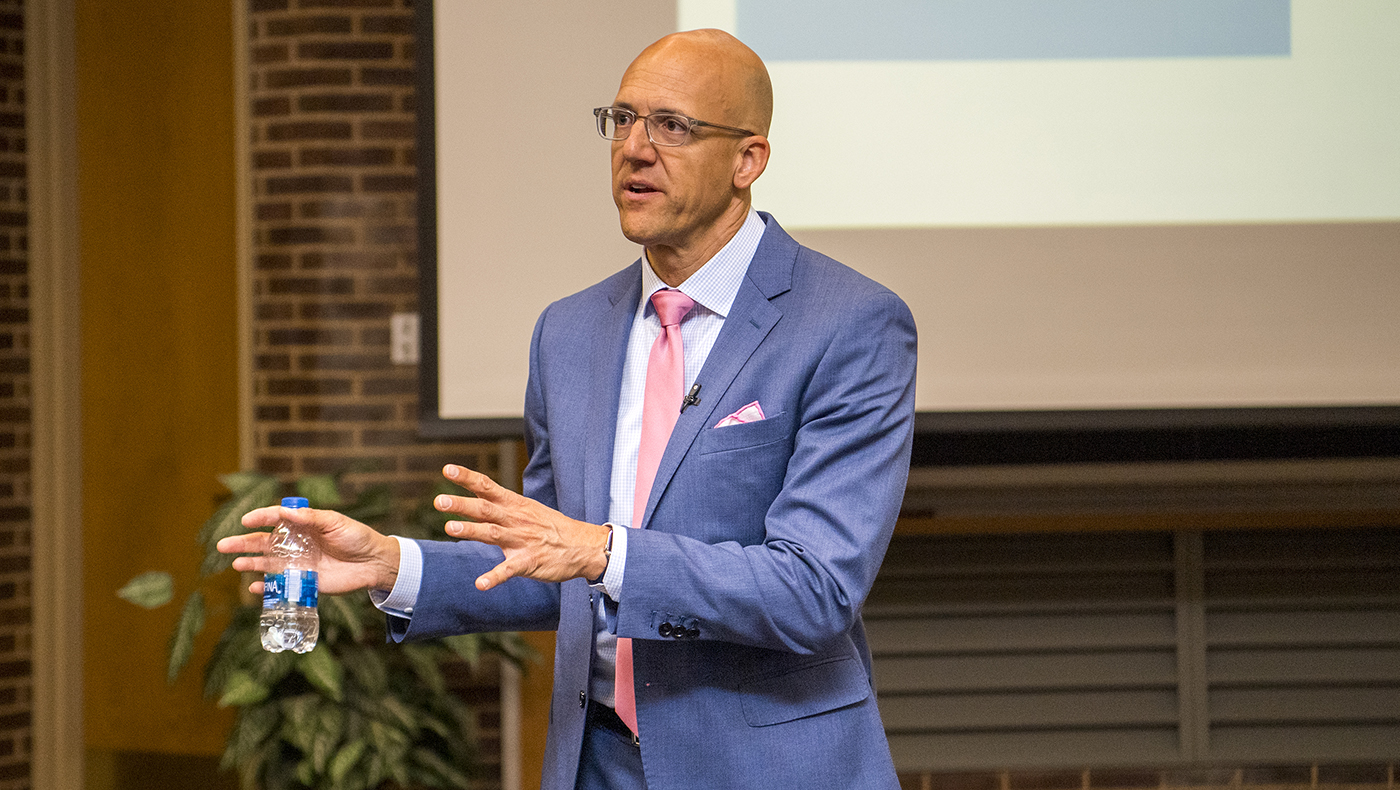 There is opportunity in not knowing the answer to every question, and not having an immediate solution to every problem. It means you can get to work figuring it out.

Jeffrey Kleintop, the chief global investment strategist for the Charles Schwab company, doesn’t always have the answers to investors’ questions on the best moves to make and what the future holds, but he is never afraid to go looking for answers. In times of crisis, that’s what leaders do.

Kleintop, a Class of 1993 business administration major and University of Delaware graduate of the Alfred Lerner College of Business and Economics, shared insights from his more than two decades career in finance and investing in a lecture entitled, “How to Lead in a Crisis.” He served as the guest speaker on April 27th for the annual Chaplin Tyler Lecture, named after a former engineer, businessman, author, philanthropist and friend of UD, who donated millions to the university.

“I often find myself in a position where I’m being asked for answers to what’s going on and I don’t always have the information that I like,” Kleintop told a gathering of UD students, faculty and staff at UD’s Purnell Hall. “You’re going to be asked to lead in a situation of uncertainty where you don’t have all of the information and the choice seems uncertain. I found throughout my career these are where the opportunities are,” he said.

Kleintop engaged audience members with an inside look at his investment strategy, which he said they wouldn’t normally see anywhere else except his Twitter feed. Recognized as one of the brightest minds on Wall Street, Kleintop is often cited in publications such as Bloomberg or The Wall Street Journal.

“I tend not to follow the crowd a little bit here,” he said, referring to information he gathers that looks different from what people would read about in investing publications or hear experts speak about on TV. Kleintop used the example of a recession, which is a concern of global investors, to illustrate how he strays from mainstream thinking to give expert advice.

Instead of calling the current worldwide economic situation a recession warning, where countries are trying to re-emerge from a global pandemic, rising inflation, shortages and increases in food and fuel costs, he said that what is actually happening is that we are on a recession watch, which is different. He used a graphic from the National Weather Service that illustrated a severe storm, verses being on a watch for one. It showed a plain taco without ingredients versus one that was loaded.

“I think that’s an important distinction,” Kleintop said. ”What’s a bear market? It’s a storm in the economy or the market.

“Let’s look at: do we have the ingredients for that? If we do, how many of them do we have, and what are the odds of that storm actually happening? That’s why I call it a watch and not a warning,” he continued.

Just what exactly does Kleintop look at when determining if the country is headed for a recession? The U.S. Treasury yield curve, which he said, despite what economists predict, has correctly predicted the last eight recessions before they happened, and never predicted one that didn’t occur.

There are multiple yield curves. Kleintop said that one was inverted for a couple of days weeks ago, and that scared people into thinking that long term bonds were in trouble. They panicked that it would mean a lack of jobs, a dip in the stock market and that profits would be down, but that curve was fixed to reflect the opposite.

“Don’t worry,” Kleintop said. All of the ingredients for concern are not there.

Kleintop said that the obvious place to look for signs of an impending recession would be Europe, since it is closest to the Ukraine-Russia conflict, but growth in countries there is pretty good. What is more is that from all indications people are still enjoying leisure activities like going to the movies in the midst of conflict and extremely high fuel costs.

Kleintop said a simple check of boxofficemojo.com reveals that numbers are pretty strong.

“It’s a fairly discretionary activity. If you’re not feeling good about your personal financial situation, your job or energy prices, you’re probably not going to the movies,” he said.

This played out in past recessions, where activities like going to the movies turned down. Kleintop used another graphic on driving, which he said was an ingredient to watch out for in predicting a recession. With high fuel costs, he said people in major cities in countries in Europe are still driving.

Kleintop told audience members that he doesn’t scare investors with recession warnings, because he does not have the information to suggest it. From where he is standing now, despite COVID-19, military conflict and alarms going off, there aren’t enough ingredients to call for it. But he will be watching.

After his talk, Kleintop answered several questions from the audience and accepted a gift from Lerner Dean, Bruce Weber. He was also invited to a special event in Lerner Hall, The Transformational Experiences in Finance “State of the Economy” panel discussion.

Kleintop joined Jason Castelluccio, a 2000 graduate and portfolio manager for NuVeen, and Andy Dakos, 1988 Lerner graduate and principal for Bulldog Investors. Lerner students Brielle Glick, a junior, Keaton Stott, also a junior, and Ean Kiely, a senior, also participated. The panel was followed by a networking reception also in the Lerner Atrium.

The Chaplin Tyler Executive Leadership Lecture Series in UD’s Alfred Lerner College of Business and Economics brings leaders from business, nonprofit organizations and government to campus to share their experiences and insights with students, faculty and the business community in an open exchange of ideas and perspectives.