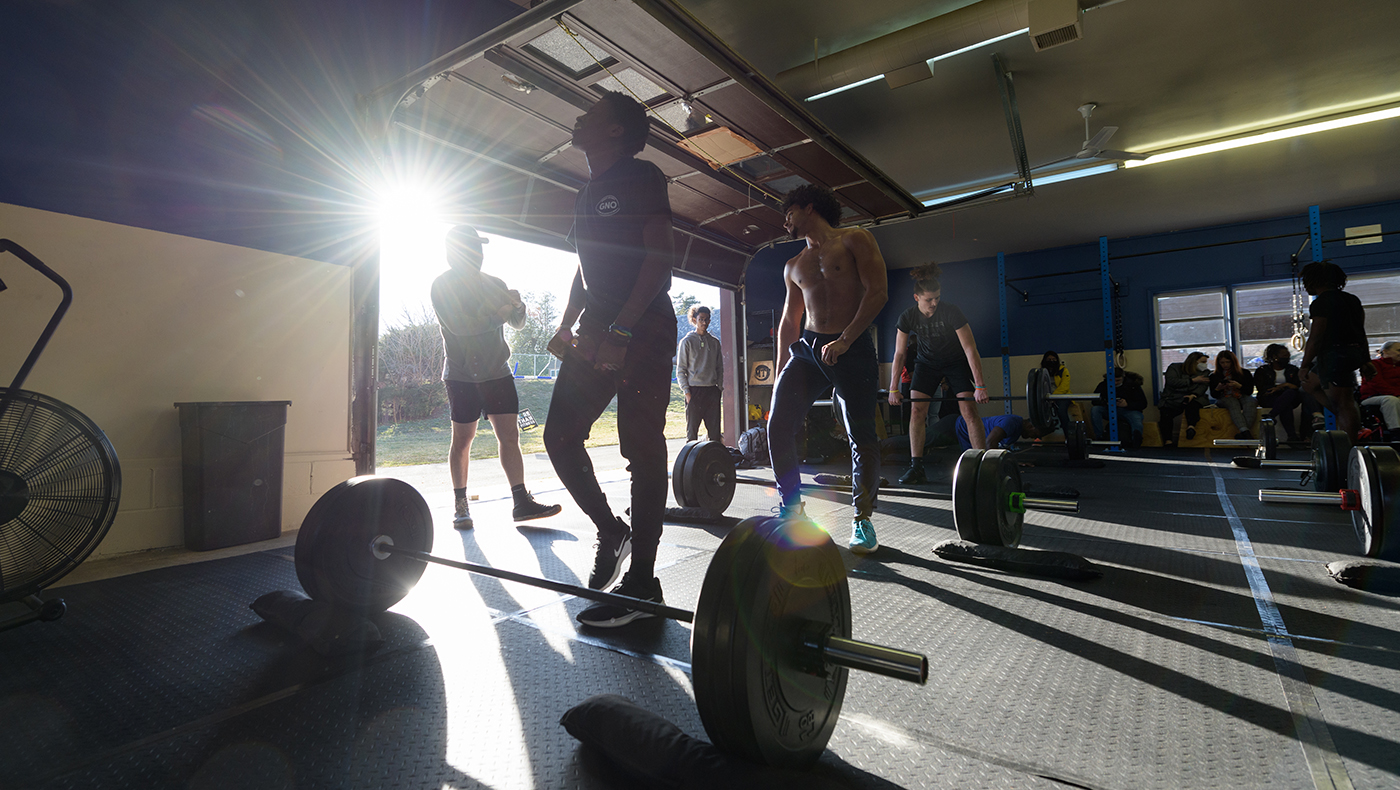 When Jeremy (Coach) Moore returned to his native Wilmington, Delaware from serving in the U.S. Army in Afghanistan, he found strength and healing by working with football players at his alma mater, Mt. Pleasant High School. This work and his own personal journey sparked an idea for Moore, to develop a unique nonprofit organization to further serve this population.

Since its founding in 2018, Moore’s nonprofit, More than Fitness (MTF), has used strength training and meditation to help teenagers in Wilmington’s Bellefonte neighborhood develop resilience. In order to grow MTF’s impact even further, Moore realized that he would need additional support. That is where MBA and graduate business students at the University of Delaware came in.

Professor of Management Information Systems and Associate Dean of Undergraduate Programs at UD’s Alfred Lerner College of Business and Economics Andrea Everard discovered Coach Moore’s story and spent months developing it into the real-world case for this year’s Carol A. Ammon Case Competition held in March of 2022. Through the case, Lerner graduate students addressed issues around creating awareness, fundraising and board development for MTF. Additionally, a team of Lerner management information students are currently working on a project to develop an app for the organization.

“For over 20 years, the Carol A. Ammon Case Competition has given Lerner graduate students the chance to bolster the knowledge learned in the classroom and apply it to real-world circumstances,” said Everard. “This year’s case allowed students to help the local community and connect to the College’s mission to ‘beneficially transform business and society.’”

In addition to trophies and cash prizes for the winning teams, hundreds of participants over the years have gained an improved sense of ingenuity for solving real-life business-related problems through the competition.

“This competition is one of the highlights of my year, and is the signature event of the MBA Program,” said MBA Program Manager Amy Estey.  “I participated twice in this Competition as a student while working on my MBA, and have managed it for many years.  It’s an experience you always remember: the company, your teammates, and how well or in my case, interminably, the presentation went,” she said with a laugh.  “It’s always wonderful to reconnect with our alumni judges, many of whom were competition finalists when they were students.”

In early March, 35 Lerner grad students from the MBA and master of science programs, and one Ph.D. candidate from the College of Education and Human Development assembled into nine teams of three to four students each and began to devise structured plans to meet the case requirements. Students had the option to either pick their own teams or ask to be paired with peers at random.

At the deadline, seven teams submitted presentations for consideration and 17 UD alumni judges from all over the U.S. provided scores and comments to identify the finalists. On Friday, March 18, the three finalist teams presented their final recommendations live on Zoom.

One of the finalist teams, calling themselves “Upperview” was made up of four Lerner graduate students who had never met before the competition, including Benjamin Michael Janocha, Victor Ponce, Sagar “Sarge” Satyan and Nick Sava.

“The day of the kickoff, Victor emailed me asking if I wanted to join his team,” Satyan said. “I had just joined the grad program here at UD two weeks prior to the case competition and I did not know anyone in the competition so naturally, I joined.

“It was fun working with Victor, Ben and Nick during the competition,” he continued. “It is important to have a strong, diverse, and unified team. The entire group was very unified as well as diverse. We all got along with each other as well as listening to different ideas for this project. We all gave our thoughts and ideas and no one was acting per se in charge. We were all committed to the cause of More than Fitness to try to do the best we can whilst learning about the non-profit organization.”

Upperview took a broad approach to their work on the case, taking into consideration existing areas of success for MTF while also applying lessons from their coursework to create realistic recommendations that Moore can immediately begin to implement in his work.

“We decided that we would not change anything about the current brand or mission statement of the organization, More Than Fitness,” Sava said. “We determined that Coach Moore’s vision and strategy were both great. We all really loved the fact that this is not merely a gym, it is a safe place for young people to learn new self-improvement skills. The focus on mental health is exceptional as well. Today, we need more places like More Than Fitness as focus on mental and physical health is so important. So, our goal was to get this brand as recognized as possible. It would be a missed opportunity for me to not say that you should consider donating to this organization to help them reach their new fundraising goals for 2022.”

“We spent a lot of time at the beginning trying to fully understand the current situation of the organization,” Ponce shared. “We put ourselves in the shoes of Coach Moore and the rest of the staff. We put many questions on the table and we argued with each other when it was necessary. I think that was crucial in finally coming up with the best possible solutions. We offered a realistic, practical and low-cost marketing strategy focused on getting more volunteers and donors using online platforms. I also believe implementing risk mitigation strategies and contingency plans helped empower the organization to entertain some of our more ambitious ideas.”

When the awards were announced on Friday, March 18th, the team called “Data Bots”, made up of Olushola Soyoye, Urvashi Jain, Riddhi Patel and Neetek Kumar, had earned second place and a cash prize of $1500. Queen’s Gambit, made up of Muhammad Fahim Alam, Jordan Fletcher, Sai Srinivas Putrevu and Umida Ruzybayeva took home third place and received a $1000 cash prize. Team “Upperview” was thrilled to discover that they had earned the first place prize and a $2000 cash prize for their work.

“We all worked really hard on the competition, but I didn’t have any expectations,” said Janocha. “Once we made it to the final three, I braced for third place. When a rival’s name was announced for third place, I fought a smile and braced for second. When our final rival’s name was announced for second place, I bounced out of my office chair with laughter but quickly held my breath and grabbed for my computer’s mouse to make sure my webcam and mic were turned off.

“I’m extremely proud of my team and I’m thankful to have had the opportunity to participate in the competition,” he continued. “The Carol A. Ammon Case Competition clarified my career goals, added momentum to my education and resulted in important connections I wouldn’t have made otherwise. I look forward to participating in future case competitions with the University of Delaware.”