UD webinar focuses on women in the boardroom 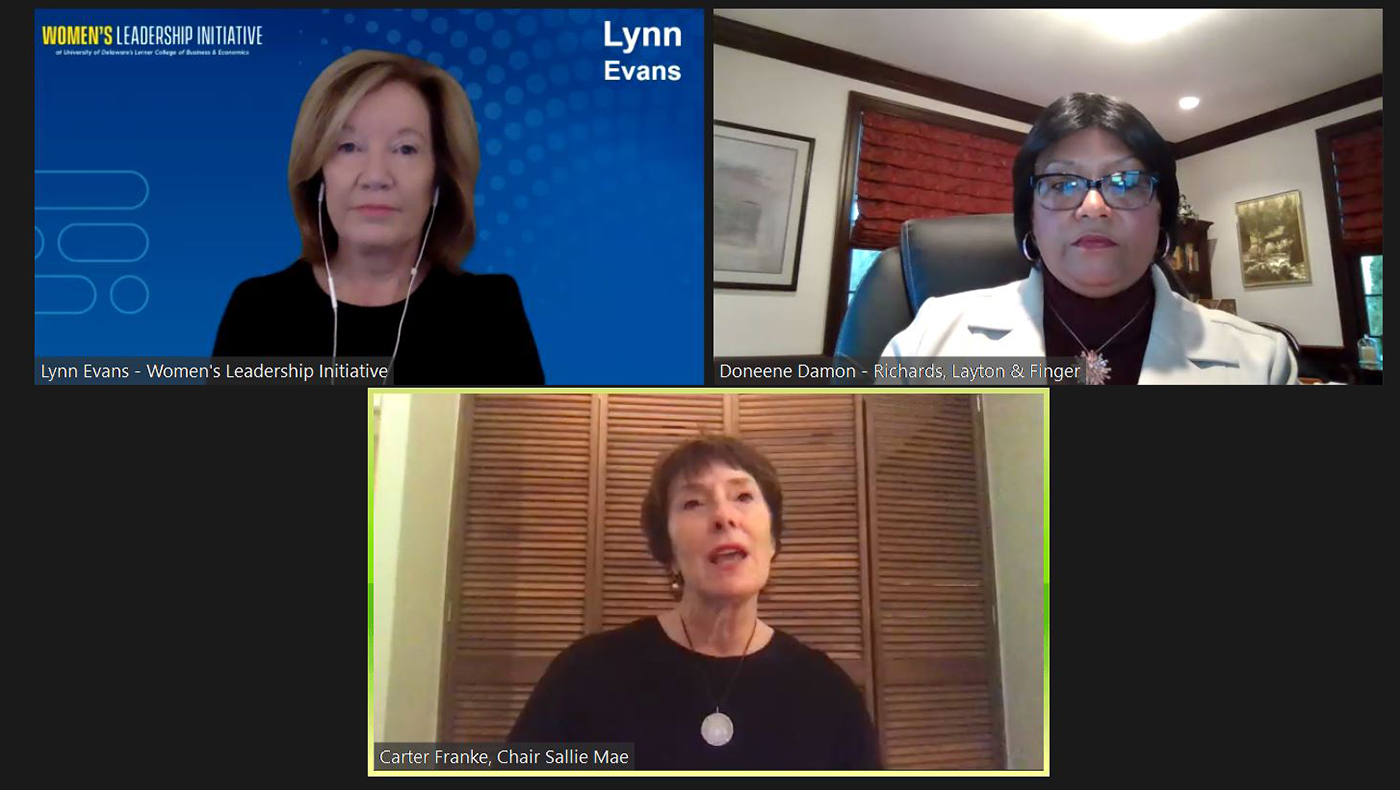 Republished with permission from the Delaware Business Times.

Earlier on in her career, Carter Franke was recruited from CitiBank to lead a small bank in Baltimore. Back then, she was hesitant about stepping away from the headquarters of a multinational bank and worried it would be a step down.

Today, Franke sees it as a pivotal move that set her on the path to serve in several high-ranking roles at financial institutions across the region, and eventually, the boardroom at Sallie Mae.

“That role really gave much more responsibility, and taught me everything I needed to know about the business. I don’t like taking risks, but if I hadn’t done that I may not have gotten here,” Franke said during the University of Delaware’s webinar, “Allyship, Advocacy and Accompliceship” on Friday. “Women really need to think about how to get those experiences to get you to contribute on a senior level, and these boards think about how you might fit best.”

Franke, chair of Sallie Mae’s Board of Directors, and Richards, Layton and Finger P.A President and Director Doneene Damon spoke about their experiences as women in the boardroom, both as leaders and allies.

Damon, who broke barriers as the first female partner of a major Delaware law firm in 1999, pointed out that bringing women into the boardroom provides a more diverse perspective, which could be leveraged to help the organization as a whole. She serves as the chair of ChristianaCare’s Board of Directors.

“It’s all about avoiding groupthink. When everyone in the room thinks the same way and has the same background and experience, you don’t necessarily get the best answer and ways to move forward,” she said. “For example, we’ve all heard about the disparities of health care in different communities. As an African-American woman, I can speak to that perspective. Not all African Americans, but mine, which represents a portion of the population.”

Both women believed there is a sense of chain allyship among women business leaders, each working to give the person coming in after them a platform to speak. Part of that could be attributed to the collaborative nature and ability to look at issues through an empathic lens.

“I believe women naturally seek out relationships, and really, being an ally is being a good friend. To be a good ally, it’s showing interest in others’ success and how I can help others on their path,” Franke said.

But there is a fine line between representation and tokenism. Damon cautioned business leaders against the mindset that women must agree on all issues because they are allies.

“While we do think similarly on some issues, we don’t think identically on every issue, and I do think that’s an expectation,” she said. “It’s also incumbent upon women to make sure others in the room are heard and how to create a safe space so they’re not talked over.”

For women looking to join a board, Franke and Damon recommended getting a breadth of experiences and think about what skills it takes to be a leader. While there is no one path to a board position, having multiple skill sets makes a better candidate. Franke pointed out that once a vacancy opens up, boards target candidates that will fill a skills gap.

“It’s important as you’re building your skill set to understand what skills you uniquely bring to the table, and what you can do to differentiate you from others,” she said.

Networking is also a key piece, even as a board seat may be out of sight for now. Damon said that even when she joined the ChristianaCare Board of Directors years ago, she made it a priority to learn everything about health care and serve on as many committees her schedule could allow.

“It’s really about your career, reputation and breadth of experience, so expand that network as broadly as possible and maintain those relationships,” she said. “Not only could they help you along the way, they can also open doors for you.”