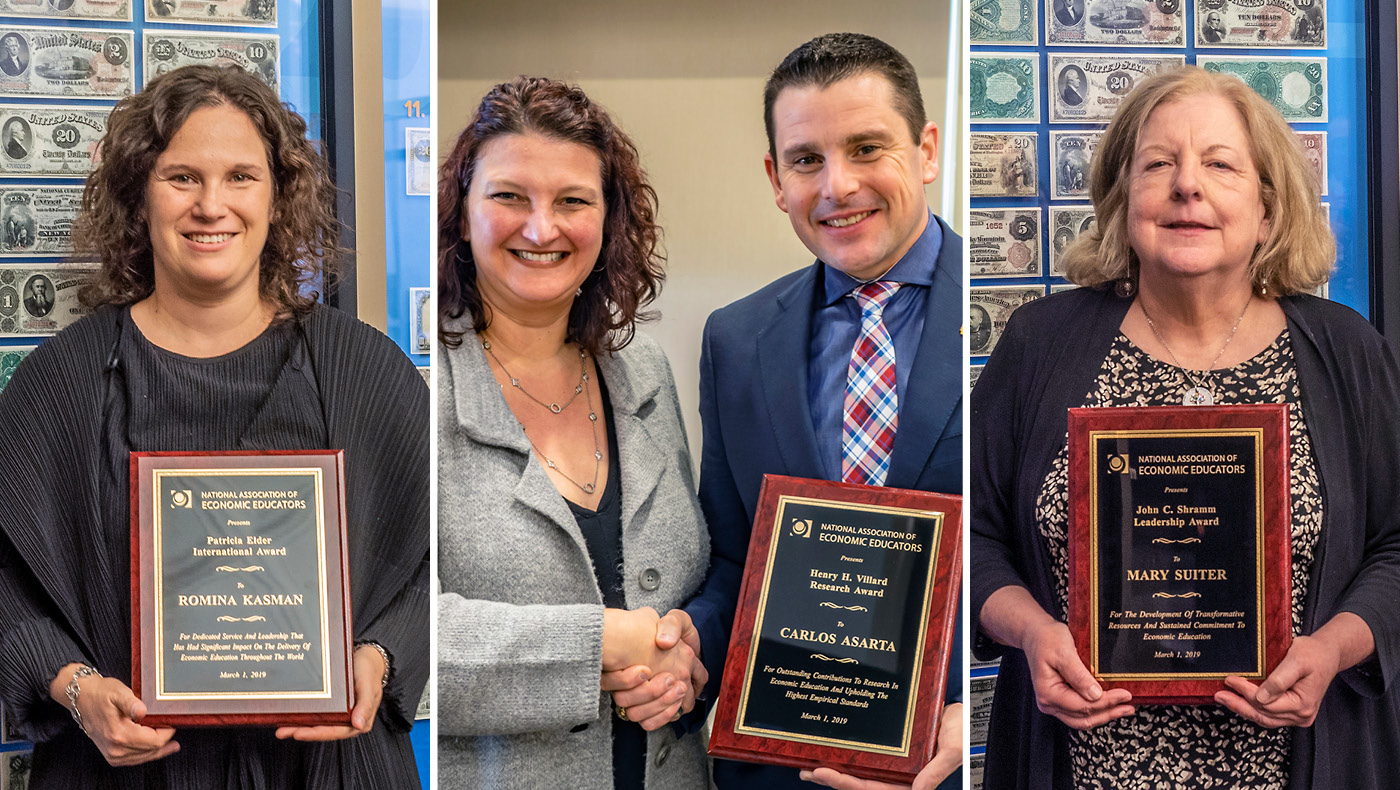 Out of seven professional honors awarded at the 2019 National Association of Economic Educators (NAEE) Conference in early March, three went to educators connected to the Alfred Lerner College of Business and Economics’ Center for Economic Education and Entrepreneurship (CEEE) at the University of Delaware. The NAEE also recognized CEEE members with three curriculum awards.

From a nationwide pool of leading experts in economic education, including members of Federal Reserve Banks, the CEEE won almost 30 percent of the NAEE awards. This is a significant achievement for the Center, which has been innovating in the field of economic education for over 40 years.

“The Lerner College is proud to celebrate the success of the CEEE,” said Lerner College Dean Bruce Weber. “Not only has the Center had a major impact on economic education in the state of Delaware, but these awards show the national reach and importance of its work.

“Alumni of the MAEEE program and the current CEEE leadership, faculty and students are being recognized by the NAEE as leaders in their field,” Weber continued. “We look forward to seeing their continued success as the Center works towards its mission to prepare K-12 educators and students in economics, personal finance and entrepreneurship by providing dynamic, effective and standards-based professional learning, resources and programs.”

The NAEE recognized CEEE Director Carlos Asarta with the prestigious Henry H. Villard Research Award for his “extraordinary, positive impact on economic education research through numerous and significant contributions in research and also in service to the profession. Over the span of 12 years since earning his Ph.D., Asarta has published 42 peer-reviewed articles and has worked as a consummate team player with numerous co-authors on a wide variety of topics in economic education.”

“It is an honor to receive the Henry H. Villard Award for several reasons: I was nominated by my peers, selected by prior recipients of the award and recognized by the prestigious National Association of Economic Educators with a national award named after the first editor of The Journal of Economic Education, the leading journal in my field,” said Asarta when asked what winning this award meant to him. “To receive this type of recognition for doing something I am passionate about and like doing is incredibly enjoyable and rewarding.”

The NAEE established the Henry H. Villard Research Award to encourage and recognize outstanding contributions in economic education research. Villard was the co-founder and first editor of The Journal for Economic Education. His contributions to early research in the discipline were notable and set the tone and pace for later research.

The NAEE honored Suiter, MAEE Class of ’89, with the 2019 John C. Shramm Leadership Award because her “leadership has had an extraordinary, positive impact at both the state and national levels.” Kasman, MAEEE Class of ’15, received the Patricia Elder International Award for “outstanding and dedicated service and leadership that have had a significant impact on the delivery or enhancement of economic education throughout the world.”

“Our faculty and staff possess the knowledge, experience and tools needed to help teachers become master educators, and our impact has been multiplied many times over thanks to the Master of Arts in Economics and Entrepreneurship for Educators (MAEEE),” said Asarta. “As MAEEE graduates and leaders in their field, Mary and Romina are living proof that the MAEEE, started by professors Jim O’Neill and Bonnie Meszaros, is one of the most impactful economic education programs in the world, producing graduates equipped with the theoretical and practical knowledge to become change agents. Our graduates are leaders influencing economic education in the United States and abroad.”

Bonnie Meszaros, associate director of the CEEE, received this email informing her that the Curious George Saves His Pennies curriculum that she and doctoral student Dilek Eruslu developed had been given NAEE’s distinguished Platinum Award. The intent of the NAEE Curriculum Awards is to recognize superior curricular resources while also offering teachers and administrators a tool for choosing curriculum based on thorough examination by a committee of experts in subject matter and curriculum design.

“We are extremely happy to see that the preparation we provide our students, coupled with their hard work and persistence, is making a difference,” said Asarta. “Our state, the University of Delaware, the Lerner College and many individual and corporate supporters continue to invest in the CEEE. We are delighted to show them that their investments are paying big dividends in all areas of economic education: pedagogy, research and leadership (both nationally and internationally).”