A Fine Line in the Hospitality Industry 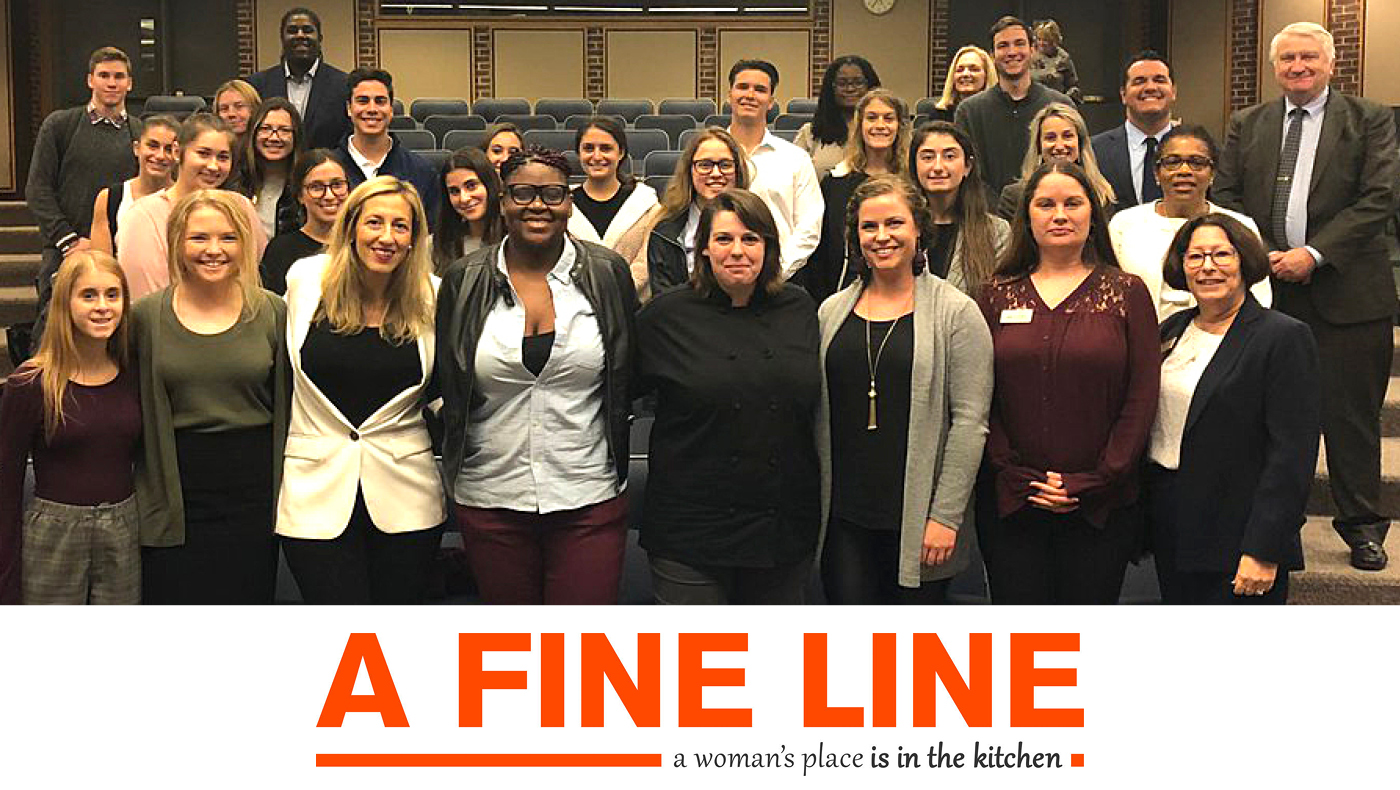 Only seven percent of head chefs and restaurant owners are women, despite the idea within society that traditionally women have always held a central role in the kitchen. This statistic and other details about the state of gender inequality in the hospitality industry were highlighted in a special screening of the award-winning documentary “A Fine Line: A Woman’s Place is in the Kitchen” for University of Delaware students, faculty and staff on Tuesday, Oct. 22 in Purnell Hall.

Several organizations including add the word Lerner in front of this name the Women’s Leadership Initiative at UD’s Alfred Lerner College of Business and Economics, the Lerner Diversity Council and the Courtyard by Marriott, co-sponsored the event.

“We welcomed Joanna James [director, producer and editor of the film] and several successful female alumni come to campus to speak to our students and share their insider perspective about some of the challenges that face women the hospitality industry,” said Lerner College Deputy Dean and Aramark Chair Sheryl Kline. “These experiences are applicable to many industries and students who attended the event were able to learn important lessons to better prepare them for their future careers.”

Following the screening, James joined a panel of UD alumni working in the hospitality industry to answer questions about their experience facing gender inequality within the industry.

“Being raised in the restaurant industry and seeing my mother work, working by her side and growing up to enter the industry myself, I began to see that many obstacles were just systematic,” James explained during the panel.

The screening and panel allowed attendees to hear first-hand accounts about the important issues of workplace harassment, equal pay, paid parental leave and career advancement while learning ways that they can combat them in their future careers. The film and panel, although focused on issues within the hospitality industry, had applications for all industries with gender imbalances.

“There is still a question mark and slight doubt about females taking on directing roles in the industry,” said panelist Allison Sprong, UD Class of 2016 and chef manager for Compass Group. “It’s important that individuals accept that question mark and use it as a power toward working through this issue.”

Panelist Gretchen Sianni, UD Class of 2012 and chef and owner of De La Cœur Café et Pâtisserie, discussed the rough patches she had experienced and observed for female entrepreneurs diving into the hospitality industry. Sianni explained that her work is very rewarding and she is proud to have built an organization from the ground-up. However, although she manages the establishment, she said that she often finds that those she conducts business with do not see her as the owner.

Sianni specifically mentioned an instance in the beginning stages of opening De La Cœur Café et Pâtisserie with her husband where, “As we opened the restaurant they would say ‘Alex and his wife.’ It happened when we asked to get money and my husband always turned and reassured people that I was the manager. The sad part is that even if you stand up, there’s a fine line where women are being aggressive, yet we just need to be heard.”

She elaborated on how often, when working through deals with vendors, individuals will look to her husband to answer questions. Although her husband relays the fact that she is the manager, many individuals find it difficult to comprehend such information, according to Sianni. While this common condition can trigger anger and pain, Sianni said that it is important to remain calm and work towards rectifying such issues.

Another panelist, Aretah Ettarh, UD Class of 2015 and sous chef for the Michelin starred restaurant, Gramercy Tavern, explained how she has found herself in situations where she has had dishes verbally ripped apart unlike her male counterparts.  Ettarh referred to another side to the coin in the hospitality industry, and said that “individuals must understand that equality should be within reason.”

Ettarh said that she believes women embarking into the hospitality industry should be embraced not disregarded. In order to enhance gender equality, Ettarh explained that women must be forthcoming and raise their voices to share how much hard work they are contributing.

“We shouldn’t have to wait for other incredible trailblazers like my mother and these amazing women featured in the film,” James said. “I know a lot of women face similar issues to my mother and I believe we all just need equal opportunity for what we want to do.”

The panelist of accomplished female chefs and restauranteurs remained optimistic that women can be successful in the restaurant business. They shared their thoughts on how women can advance in the foodservice industry by following their passion, staying focused, being aware of what is happening around them and speaking up.