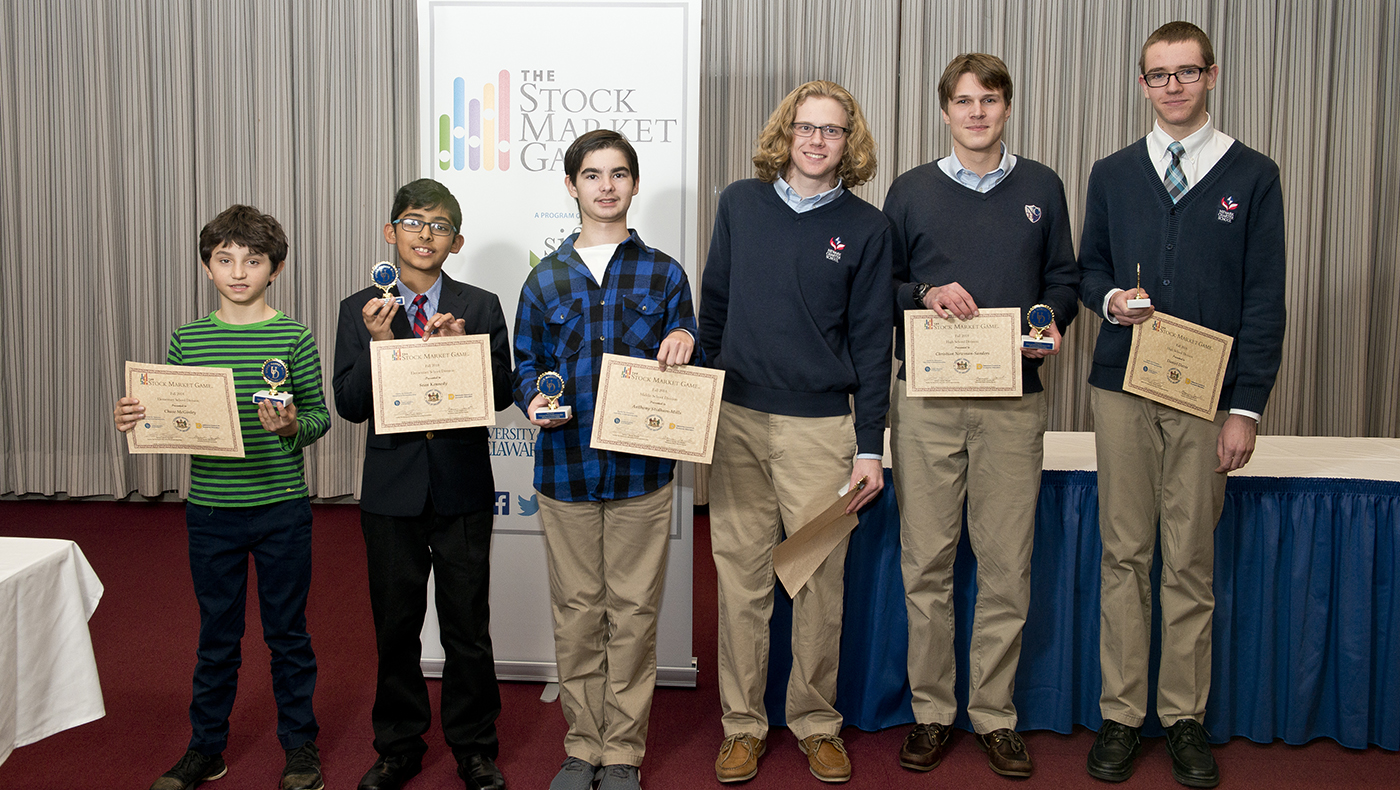 In the 10-week period between October 1 and December 7 of 2018, financial markets fluctuated daily, and the S&P 500 Index incurred a loss of almost 8 percent. In that same period, teams of Delaware elementary, middle and high school students posted gains as high as 10.4 percent.

The students earned these gains as part of the Fall 2018 Stock Market Game (SMG), a program of the SIFMA Foundation funded by the Delaware Department of Justice’s Investor Protection Unit, with support from WSFS, and offered by the University of Delaware’s Alfred Lerner College of Business and Economics’ Center for Economic Education & Entrepreneurship (CEEE). On Wednesday, January 9, from each of the three grade-level divisions the winning teams—chosen from among the 446 competing—were honored at the SMG Awards Ceremony at UD.

Marion Jacobs, Delaware SMG coordinator, began the program with a brief history of the game. Jacobs then explained how students learned about the stock market, then researched stocks, in order to make the selections for their portfolios. The winning teams had the highest money-value portfolios of the 1,395 participating students in grades 4-12 from 39 schools in Delaware.

Chase McGinley and Sean Kennedy, fourth graders from The Tatnall School, were the winning team for the fourth through sixth grade division, with a portfolio valued at $103,715. The team started the game in 42nd place in the elementary school category, and began to carefully research available stocks, choosing to invest in the Ford Motor Company, PepsiCo, Inc. and Coca-Cola Co.

“The best part [of the Stock Market Game] was choosing stocks with my partner,” said Kennedy.

McGinley and Kennedy then moved up the ranks until they were in second place. After a brief fall back to third place, the team said that they were very excited to jump back up to first place to end the game. The team ended their speech by thanking UD, the other teams for making the game so exciting, their teacher (Heather Brooks), their school’s librarian and their moms.

Anthony Stidham-Mills from Kirk Middle School experienced an initial setback when his teammate transferred to a new school in the first weeks of the game. But Stidham-Mills didn’t let this stop him from succeeding and continued in the games as a team of one, working with his teacher, Jennifer Rhudd.

Stidham-Mills said that he wanted to take a unique approach to investing, by buying what may have appeared to be weak stocks. He researched Tesla, Inc. and noted that in spite of a recent drop in the company’s stock value and the agreement of its CEO, Elon Musk, to step down as chairman, it was set to announce the release of a new product. Stidham-Mills bought a large quantity of Tesla, Inc. two days after the new agreement was announced. This proved to be Stidham-Mills’ most successful stock, and he ended the game with a portfolio valued at $110,396, the highest, not only at the seventh through eighth grade division, but at any level in the game.

The winning team from the ninth through twelfth grade division was Daniel Davis, Shaun Huebler and Christian Newman-Sanders from Newark Charter School. This team ended the game with a portfolio valued at $104,522. The team based their investment strategy on the 10-week timespan of the game. They researched which stocks were the most volatile first, with the goal of finding options with a recent large drop that they believed had the potential for a rebound, and invested in them.

Additionally, the team found several non-volatile stocks with high growth, and invested their remaining funds in these stocks. This is the third time that their teacher, Justin Miller, has advised a team that has won the Delaware SMG.

Craig Weldon, chief special investigator for the Delaware Department of Justice’s Investor Protection Unit, presented the Stock Market Game awards to the winning teams. He spoke to the group about the growth of the partnership between the Investor Protection Unit and the CEEE over the past several years. Weldon closed by telling the winners’ parents, “You should be very proud.”

Director of the CEEE and professor of Economics, Carlos Asarta, echoed this sentiment, noting the continued support that the Investor Protection Unit has provided for the SMG, as well as other CEEE programs. Asarta thanked the parents, teachers, Delaware Department of Justice, WSFS, and Marion Jacobs for their work to make the program, and students’ success, possible. He closed the ceremony by joking that Stidham-Mills, having performed better than many professional investors, should consider managing real portfolios.