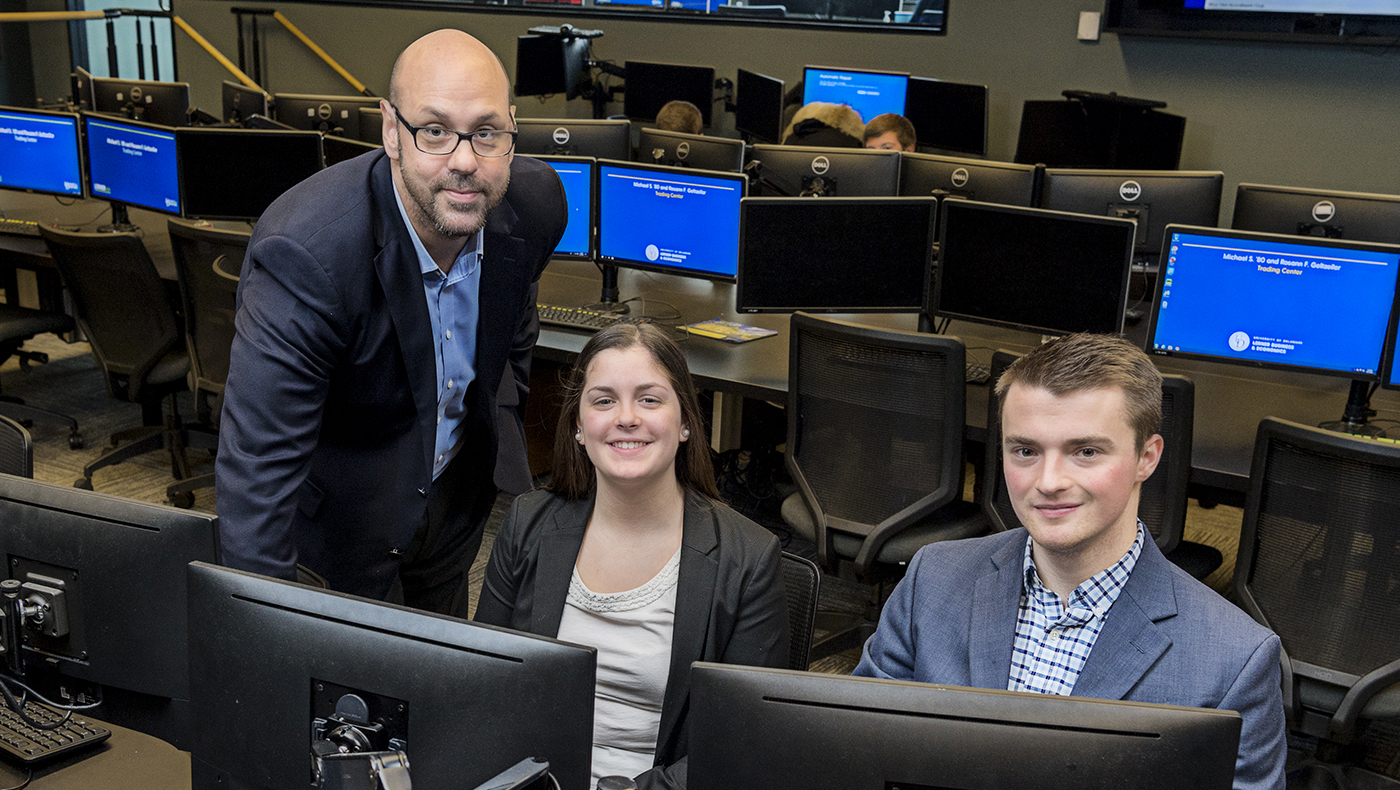 After a particularly volatile year in the financial markets, many investors incurred significant losses in 2018. However, the group of savvy investors from the University of Delaware’s Blue Hen Investment Club(BHIC) at the Alfred Lerner College of Business and Economics rose to the challenge and outperformed the S&P 500 market indexes.

At the end of 2018, the S&P 500 Index lost ground with a total return of -4.4% for the year. Meanwhile, the BHIC held steady, through a combination of good research analysis and stock picks, and returned -2.7% which equates to +1.7% outperformance of the S&P 500 Index. This is the largest improvement on the index the club has achieved in its 20-year history, and it was able to outperform this benchmark consistently throughout the year.

This is an accomplishment that many professional investors can’t claim; according to SPIVA scorecard data, over 76% of funds have underperformed the S&P 500 over the past five years. Built from the largest 500 US-based companies by market value, the S&P 500 is one of the best recognized American stock market indexes.

“The Lerner College is proud of the BHIC for developing student leaders who are trusted to manage $2 million with a structured process and provide an open door to students interested in joining. They support our College’s mission of preparing students for success through experience-driven learning,” said Bruce Weber, dean of the Lerner College.

He continued, “Beating the S&P 500 is just a bonus since the educational benefits are so vast. Our students have proven that they have the knowledge and skills to thrive, even in a volatile and difficult year. We look forward to the club’s continued growth in 2019.”

Prior to 2018, the BHIC, UD’s student-managed investment fund which manages a portion of the university’s endowment, has outperformed the S&P 500 periodically, but never beaten it by this much over an entire year. “Once elected president, I knew that this had to be our goal for the year. I stood up at the first meeting and said ‘we’re gonna beat it,’” said 2018 club president and senior finance and accounting double major Ryan O’Donnell.

Both O’Donnell and Anna Perrotta, a sophomore finance and accounting double major, joined the club in the fall of their freshman years, but their experiences as members have differed dramatically. This is largely due to the changes that O’Donnell and his executive team made to the club organization.

O’Donnell felt that to reach the goal of beating the S&P for a year, the stock pitching process would need to be improved. The club members work in sectors, either as analysts or sector heads, with each sector pitching stocks for a different component of the financial market. The entire club then votes on which stocks the BHIC will invest in.

“My executive board changed [the stock pitching process] so that now we work with the sectors ahead of time to improve their pitches,” O’Donnell said. “With this method, the presentations have improved, sectors are doing better work and the club’s results have improved.”

Perrotta experienced this hands-on approach, saying that, “Coming in as a freshman I had zero finance knowledge, and it’s very difficult to be thrown into a situation where you don’t know what you’re talking about.”

“My sector heads took the time to acclimate new analysts,” Perrotta continued. “They’ve offered their time to meet one-on-one to teach me, answer questions and make sure I know what I’m talking about.”

O’Donnell’s assertion that the club’s results have improved can be seen in the numbers: during the 2018 year, the club beat the S&P 500 by as much as 6% at one point. After achieving consistent outperformance throughout the year, the club anticipated that the final month of the year would be the test of their ability to make their goal.

“The BHIC investments suffered the most during the final weeks of December when stock market volatility increased,” noted club advisor and instructor of finance Richard Jakotowicz. “Going into winter session, the BHIC was concerned about the market potentially dropping so they decided to leave 4% of the portfolio in cash as a small hedge.”

Jakotowicz continued, “Given how overvalued most stocks were at the time, the BHIC felt the probability of a correction was higher than normal. They were not expecting the magnitude and speed of the correction to be so large.”

Now that the 2018 year has come to an end and the club achieved its goal, O’Donnell plans to return to being an analyst, while Perrotta hopes to run for a leadership position.

“I wanted to take the club from good to great, and my hope is that they keep pushing to be better,” said O’Donnell. “I hope BHIC will keep focusing on teaching people. The best part of this club is that it allows people to learn so much.”

What is the Blue Hen Investment Club?

BHIC is open to students from all majors and meets every Thursday night. It provides a valuable educational experience to its members by allowing them to manage an investment portfolio of real dollars. Additionally, each semester, the club offers a 1-credit course with the purpose of educating both prospective members of the club as well as any students interested in learning more about security valuation.

“The first two years in BHIC are mostly about learning, but my junior and senior years have been more about teaching,” said O’Donnell. “I wouldn’t have figured out what I wanted to pursue as my career without BHIC. Someday I want to be a professor, so getting to practice that skill and run my own class has been a great experience.”

The BHIC also operates a Charitable Grant Committee. This is an internal group of members who are responsible for allocating a portion of the portfolio’s assets to philanthropic Registered Student Organizations (RSOs) and non-profit organizations in the UD and Newark area.

Perrotta is involved in the Charitable Grant Committee and said that she decided to get involved because, “No other RSO gives back to other RSOs the way that BHIC does, so I’m really happy that I’m there. It’s a very humbling experience.”

Recruitment to join the Blue Hen Investment Club is held during the first week of each semester. Students from any discipline, school or major are welcome to apply for the BHIC. Interested students should attend the club meeting on Thursday, February 14, 2019 at 5 p.m. in the Geltzeiler Trading Center to get specific application instructions.