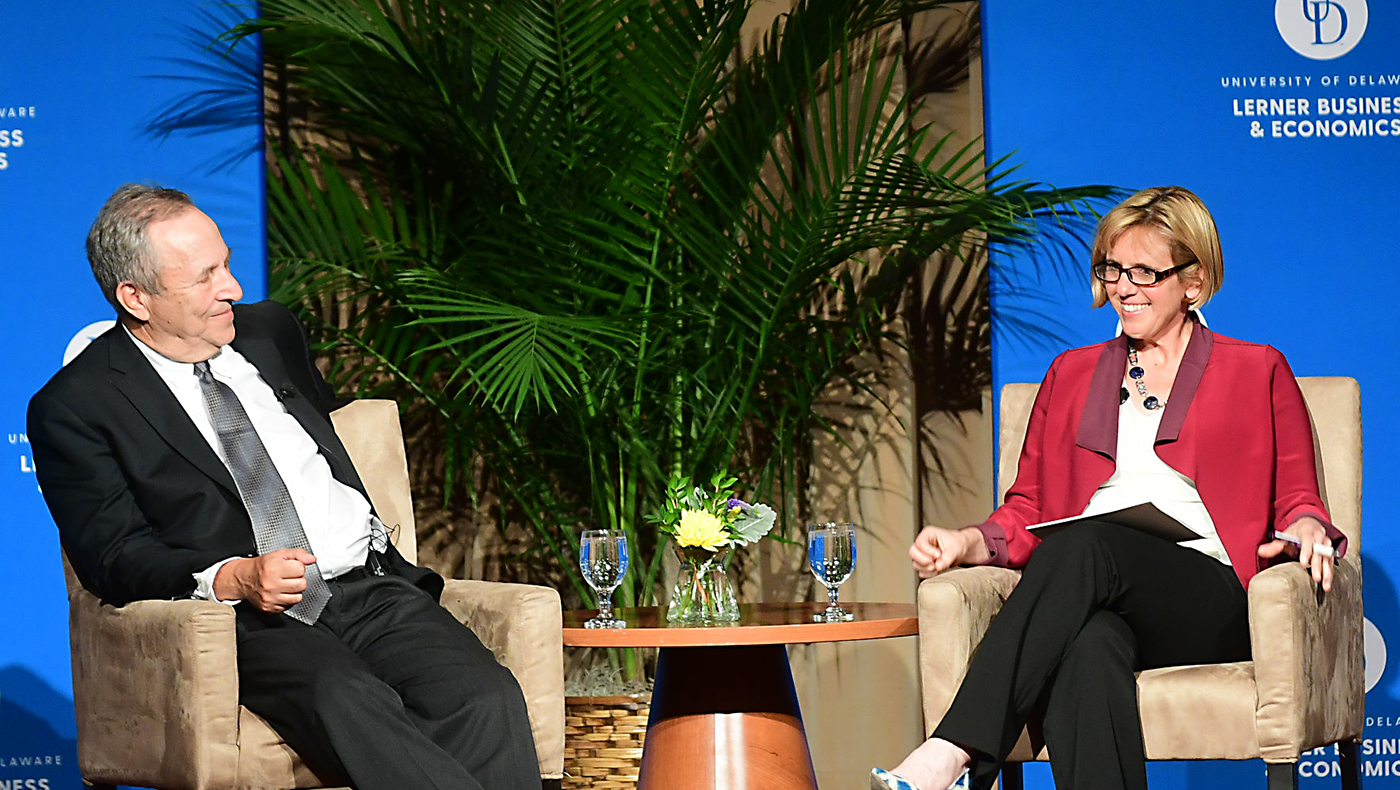 The odds are below 50/50 that the U.S. will have a recession next year. That’s according to Lawrence Summers, former Secretary of the U.S. Treasury and Charles W. Eliot University Professor and President Emeritus of Harvard University, who offered his offered his insights on the U.S. economy as well as on the 2017 corporate tax cuts and the policy behind deficit reduction during the 2019 Hutchinson Lecture on April 23, 3019, sponsored by the University of Delaware’s Alfred Lerner College of Business and Economics and the Biden Institute.

Predictions for the U.S. Economy

In a fireside chat moderated by Senior Advisor and Chair of the Policy Advisory Group of the Biden Institute Sarah Bianchi, Summers continued that the odds are well above 50/50 for the years following 2020. He asserted that the risks from a potential recession could be greater than usual because the underlying growth rate in the U.S. is slow with economic expansion, financial excess in credit markets and global economic uncertainty.

He expressed concern that the economy has become quite brittle with respect to recession. The U.S. interest rate from the Federal Reserve is currently at 2.5%. This rate means that there would not be room to room to cut interest rates by 5%, which has been the historic response to recession. Summers believes that the Fed won’t be able to give the economy the jolt it usually does to combat recession with monetary policy, and therefore the U.S. economy will need to turn to fiscal policy. The government would need to spend more and reduce taxes for a time so that there is enough spending to fuel growth.

Summers also brought up the idea that with its sustained substantial economic growth, China mounts serious challenges to the U.S. position as the world’s largest economy. According to Summers, this is a critical moment for the U.S. with respect to middle class standards of living, maintaining global leadership and being able to contain and manage the business cycle.

“The two things that worry me are the inadequacies of the economy’s growth in translation to helping the middle class and the brittleness of the economy in response to the next possible recession,” said Summers.  “I think those are both serious issues facing our country.”

Reflection on the 2017 Tax Cuts

“The economic statistic most affected by the tax cuts was the amount of money that corporations spent out of their profits to repurchase their shares,” said Summers. “That is the [economic] indicator that, when increased, has the least to do with the economic wellbeing of 99% of the population.”

Summers explained that the tax cuts were designed with the idea of cutting the corporate tax rate. For the first time in his career, he saw CEOs going to Washington D.C. to ask for larger cuts in the tax rate and saw them getting even more of a cut than they were asking for. In Summers’ view, this was not a well conceived or designed policy. He would have recommended instead cutting the tax rate to 25% and closing tax shelters to pay for the rate cut, which he believes would not have changed the revenue but instead made the economy more competitive. The 2017 tax cuts, however, brought the corporate tax rate down to 21% and added additional tax shelters, which Summer asserted was not a good use of resources.

Summers’ position on tax cuts is that the government should focus on necessary investment. To avoid going into a perpetual deficit, he recommends bringing the corporate tax rate up and taking care of tax compliance problems to pay for the new spending. Some infrastructure investments could potentially yield enough revenue to pay for their investment, but there are many different investments that Summers believes could be helpful.

“We are auditing billionaires at one third of the rate we were auditing them at 15 years ago, and you are more likely to be audited in the United States of America if you make $37,000 a year and you are getting the earned income tax credit than if you are earning a billion dollars,” said Summers. “On average, one extra hour of auditing a millionaire gives $4,500 revenue. I’m here to tell you that auditing an IRS agent to do an audit does not cost $4,500 an hour… that’s underinvesting. That’s putting a burden on our kids’ future.”

When Bill Clinton became President in 1993, the interest rate was about 6%, costs of capital were high and business investment was low. Summers said that the diagnosis at the time was that if the government was trying to borrow less, then there would be less pressure in credit markets, the cost of capital would come down, businesses would invest more and the economy would grow faster. Summers believes that was a smart diagnosis of the problem at that time and led to the best eight years the U.S. economy has had in 50 years.

However, when the interest rate is 2.5%, Summers doesn’t believe you can make that same diagnosis. The cost of capital is not a major issue at the current rate, so the idea that a core economic policy would be to bring down the cost of capital doesn’t make sense to Summers. Money is less expensive to borrow today, but unlike in 1993, Summer asserts that the country’s most important debts and burdens on the future are not paper debt at a 2.5% interest rate, it’s asking, “How are we borrowing from the future?”

“We’re borrowing from the future when we’ve got so many potholes on American highways because of deferred payments that it costs the average driver 75 cents on the gallon in extra repairs on their cars,” said Summers. “We are borrowing from our future when you walk around American schools and too many of them have paint chipping off of the walls… if you look around, we’re underinvesting in a lot of ways.

“We’re putting the burden on our future when we’re continuing to burn coal without making really efficient investments in renewables that would permit us to solve the problem of climate change,” Summers continued. “We’ve got debts and deficits aplenty and we’re putting the burden on our future. The most important debts are not the paper ones that the government issues…making investments that we’re neglecting in having a society that works better for all Americans, those are the deficits that should be the center of our policy concern now.”