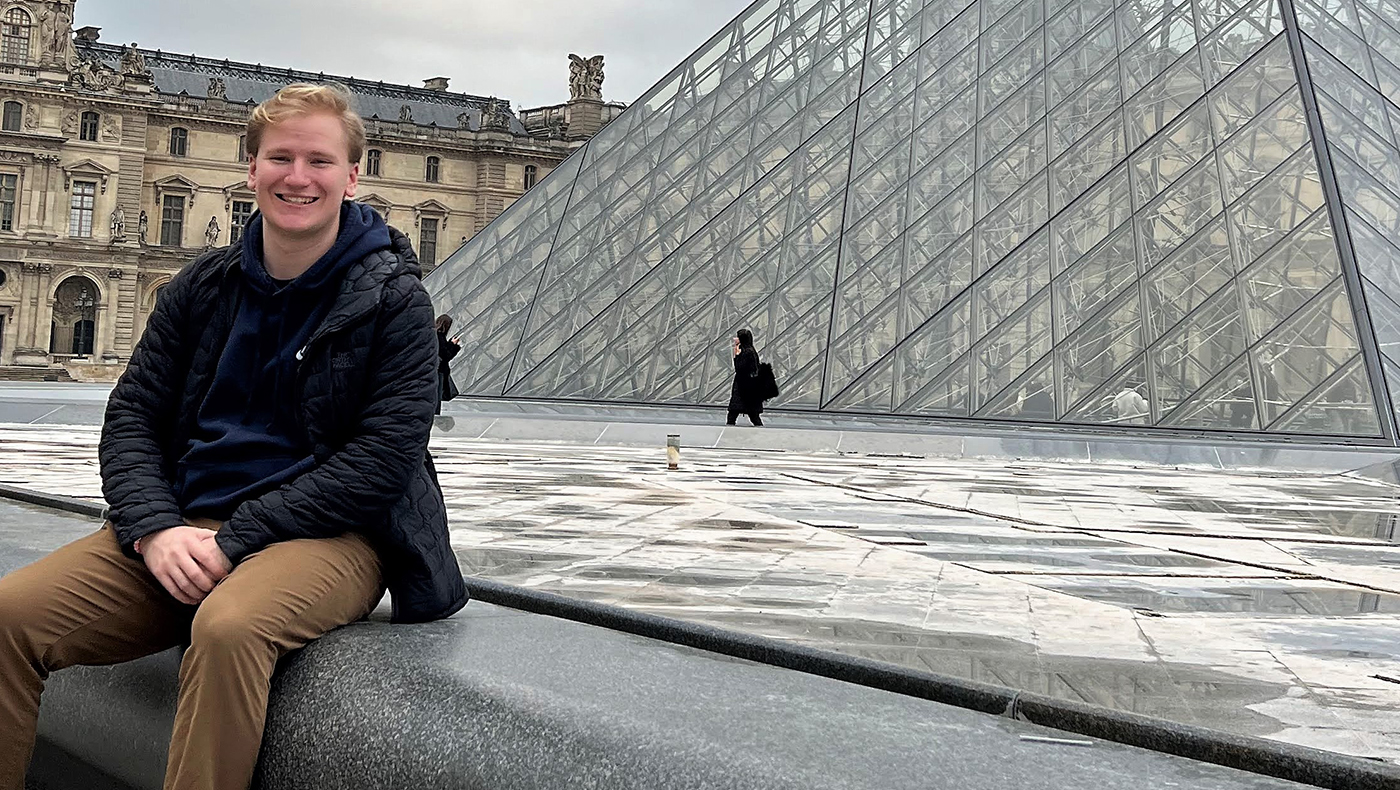 Carl Stewart, a marketing and sports management double major at the University of Delaware from Cranbury, New Jersey, started his Blue Hen journey on move-in day in 2019. “From my first day, I really loved how many people were here,” Stewart said. “I always wanted to go to a big school, where there were many academic and professional opportunities and a large community of friends.”

Stewart has made the most of his time at UD’s Alfred Lerner College of Business and Economics by excelling in academics and pursuing his passions. Stewart’s most recent accomplishment was receiving the 2021 Philadelphia Sports Writers Association Foundation (PSWAF) Award for Excellence in Journalism. The award recognizes undergraduate students who demonstrate an understanding and commitment to achieving excellence as a future sports journalist.

“I believe that my ENG 110 essay ‘Gooooal! Kick Racism Off the Soccer Pitch’ was instrumental in PSWAF’s decision,” Stewart said.

Stewart is grateful to Cindy Walkusky, an academic advisor at the Lerner College, who provided a letter of recommendation for him. She had all praises for Stewart, sharing her pride for his achievement.

“Carl is an amazing student who seeks out opportunities and works hard to achieve them,” Walkusky said. “This is evident in him being awarded the PSWAF scholarship, the excellent work he has done in double-majoring in sport management and marketing and securing an internship with the Phillies! I am very proud of him and his accomplishments and am honored to be his academic advisor!”

Stewart initially wanted to pursue a career as a history teacher but, after interning at his local middle school as a teacher’s aide, he pivoted to double majoring in sports management and marketing at UD. His past experience working as a social media and marketing strategist for Trenton Thunder, a minor league baseball team for the Yankees, throughout high school deepened his love for anything baseball-related.

Stewart explained, “I did everything there was to do! From mascot, ticket sales, fan services, literally everything, I did. I fell in love with that. I added that [marketing] because those two go hand-in-hand.”

At UD, Stewart is active in many student-run organizations. He is the vice president of the Future Professionals of the Sports Management Industry club and is a member of the Blue Hen Marketing club. Through these groups, Stewart has gained hands-on experience in the sports industry by attending a Sixers game, viewing a sports panel interview and visiting the Philadelphia 76ers field house in Wilmington, Delaware.

“It was really great, having those experiences, like going to the facilities and talking to the people in charge of them,” Stewart said. “I thought it was the coolest thing ever.”

Stewart’s RSO participation also aided him in securing two internships; one being a public relations intern for McNeil, Gray and Rice: Strategic Communications Agency and the other with the Philadelphia Phillies professional baseball team. He shared that McNeil, Gray and Rice enhanced his communication skills. There, he would cold call company CEOs to give them a pitch in order to convince them to work with the agency.

“It was really stressful but it was a good experience because I would like to go into ticket sales and, with a sales professional team, you are going to need to cold call a lot,” he noted.

Stewart attended a career fair to secure his internship with the Phillies. There, he was able to network and interact with department heads as well as the players.

“That was another excellent experience that I would have missed if I did not go to UD,” Stewart said. “Only a few students took advantage of it but I made sure to get on that!”

Stewart’s goal for the future is to have a career in Los Angeles because of his love for the city but his immediate goal is to move to Philadelphia, Pennsylvania for its close proximity to his  friends and family as well as the Philadelphia professional sports teams.

“My ‘I made it moment’ would be finding the perfect balance between interacting with the players of a team and the fans,” Stewart said. “So, I think once I am in the position where I can do both things, I will know that I did it finally.”