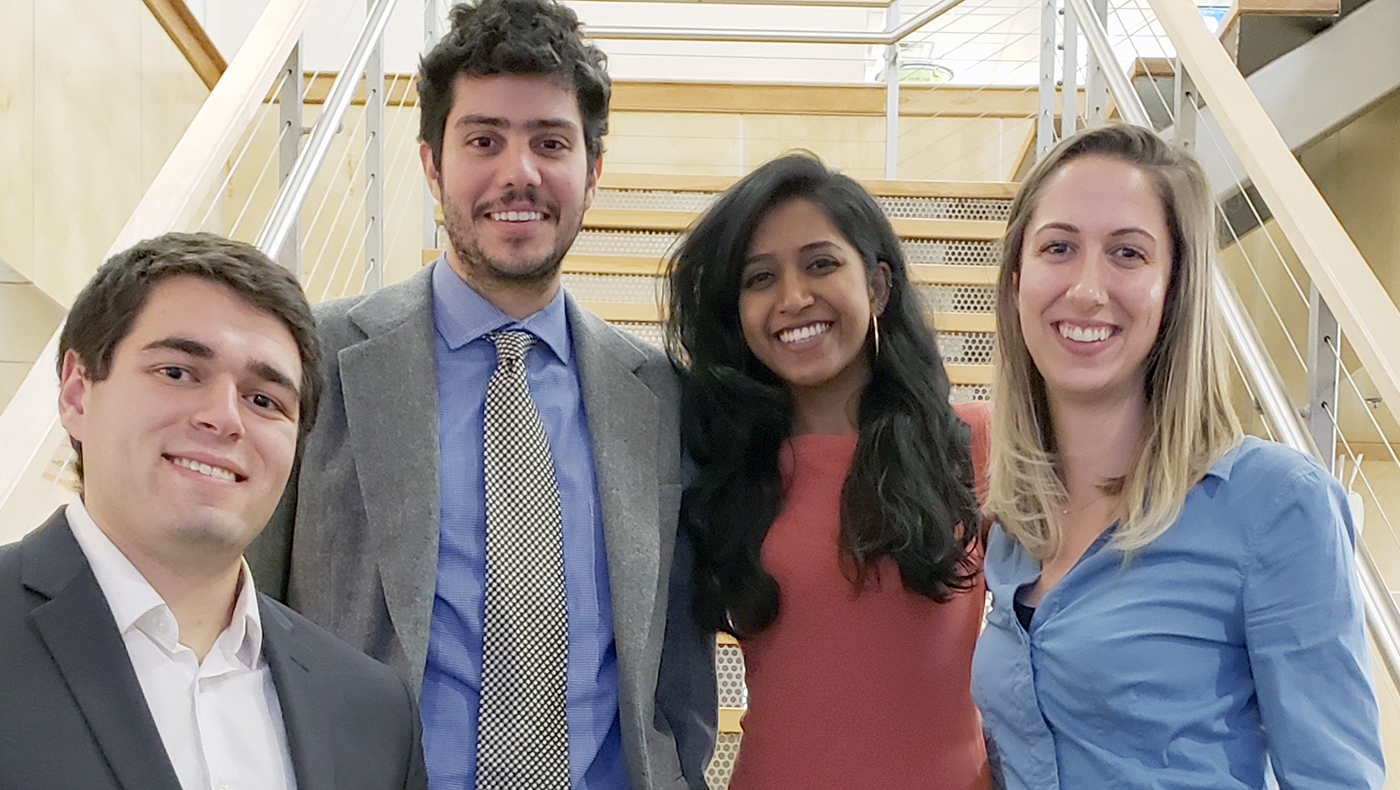 What would inspire four Lerner MBA students to begin the new year sequestered in a hotel working on business cases for hours on end in Montreal, Canada? As the first team from the University of Delaware to take part in the John Molson MBA International Case Competition, SaiSri Gajjala, Tim Huffman, Sarah Meadows and Bruce Wayne said that they didn’t know exactly what they were getting into, but it was a challenge that they decided to take head-on.

“Bruce and myself only learned about the competition by chance,” said Huffman, MBA Class of 2019 at UD’s Alfred Lerner College of Business and Economics and small business advisor and analyst with the Small Business Development Center (SBDC). “We were competing in the Harvard MBA Marketing Case Competition this past fall when we learned about the John Molson competition. Another team told us about ‘this John Molson competition thing up in Canada’ and said we should check it out. Bruce and myself pitched it to Amy Becker, our advisor, and were given the green light to put together a team. She then was able to secure funding for the whole team to go to Canada to compete.”

Most teams that participate in the competition have about a year to prepare and practice. The UD team only found out about the competition a month ahead of time, and with school breaks and holidays, the team had to make their brief time together count. Having participated in other case competitions gave the team some experience, but the uniqueness of the John Molson MBA International Case Competition produced many new challenges for them.

“It’s a very large, international case competition. At [the] John Molson [MBA International Case Competition] 20 countries were represented by 36 teams,” said the team’s coach Katalin Takacs Haynes, associate professor of management and faculty director for MBA and Graduate Programs. “One of the other unique aspects of this competition is that students are not allowed to use any external sources of communication while they are preparing the case. Essentially, a team is sequestered in a hotel room and they are given a hard copy of the case that they then read. They are given two computers that aren’t connected to the internet and they aren’t able to bring any of their smart devices into the room, only blank notepads or post-it notes and pens.”

“The coursework I have completed thus far had prepared me for a lot of the technical skills and materials covered in the competition, but aspects of the Carol A. Ammon competition and even mentoring from faculty and staff was what helped us succeed as a team,” said Wayne, MBA and M.S. in International Business Class of 2020 and associate at American Honda Finance.

Takacs Haynes appreciated the strength of the team’s dynamics, noting that Huffman and Wayne were strong in finance, while Gajjala and Meadows excelled in strategy. She believed this allowed the team to balance one another and create a great work product. She noted that the team had a level of dedication to the competition and respect for one another that allowed them to work well in a high-pressure situation.

“The first [round] was truly memorable for me,” said Meadows, dual MBA and M.S. in Information Systems & Technology Management, M.S. in Cybersecurity Class of 2021 and IT project manager for IT Strategic Operations at UD. “We were so anxious going into our first case and we were very nervous when we delivered the presentation to the judges that we were sure we had lost the first round. However, I remember our coach, Kati, finding us in the hotel to tell us we not only won the first round against the team we competed against, but we had the top score out of all 36 teams!

“I couldn’t believe it,” Meadows continued. “It wasn’t until that moment that I thought we might have a chance against these teams that have had a year to practice, whereas we learned about the competition only a couple of months beforehand! We could see big improvements in ourselves and our team with each new case, and that was a stellar feeling I’ll never forget.”

After the first round, the team continued to find success, winning two out of five rounds of the competition. Although this did not allow the team to qualify for the finals, they all agreed that they learned and improved throughout the week of competition.

Gajjala, biomedical engineering Class of 2015, MBA Class of 2019 and technical support specialist at Siemens Healthineers, noted, “The case competition further verified my interests. It confirmed to me that I enjoy strategic problem solving, working with people and, most importantly, being a global citizen.”

“I learned that there is never one correct solution to any problem,” said Huffman. “It is imperative to not only figure out the correct course of action but also to have multiple back-up plans ready for implementation at any given moment. I also learned that the more I learn, the more I realize just how much more that I still have left to learn.”

“Competitions like this are an incredibly valuable experience,” concluded Meadows. “Not only do you get the opportunity to travel and network with graduate students from around the world, but you gain so many new skills and ideas from watching other teams. After this competition I have no doubt in my mind that each member of our team can easily take a complex business case and deliver a full-blown strategy with analysis and financials—plus a PowerPoint presentation to go with it—in addition to several alternative strategies, all in under three hours. Not many people can say that, but that skill will pay off immensely in each of our careers.”

For Gajjala, Huffman, Meadows and Wayne, the competition ends here. The rules of the John Molson MBA International Case Competition do not allow team members to participate more than once. However, for UD, the journey is just beginning. Takacs Haynes plans to create a new team and start preparing much earlier for next year’s competition. The success of this first team convinced Haynes that UD students belong at this competition, and she is already creating a syllabus or checklist to help the next team of graduate students take the competition to the next level.