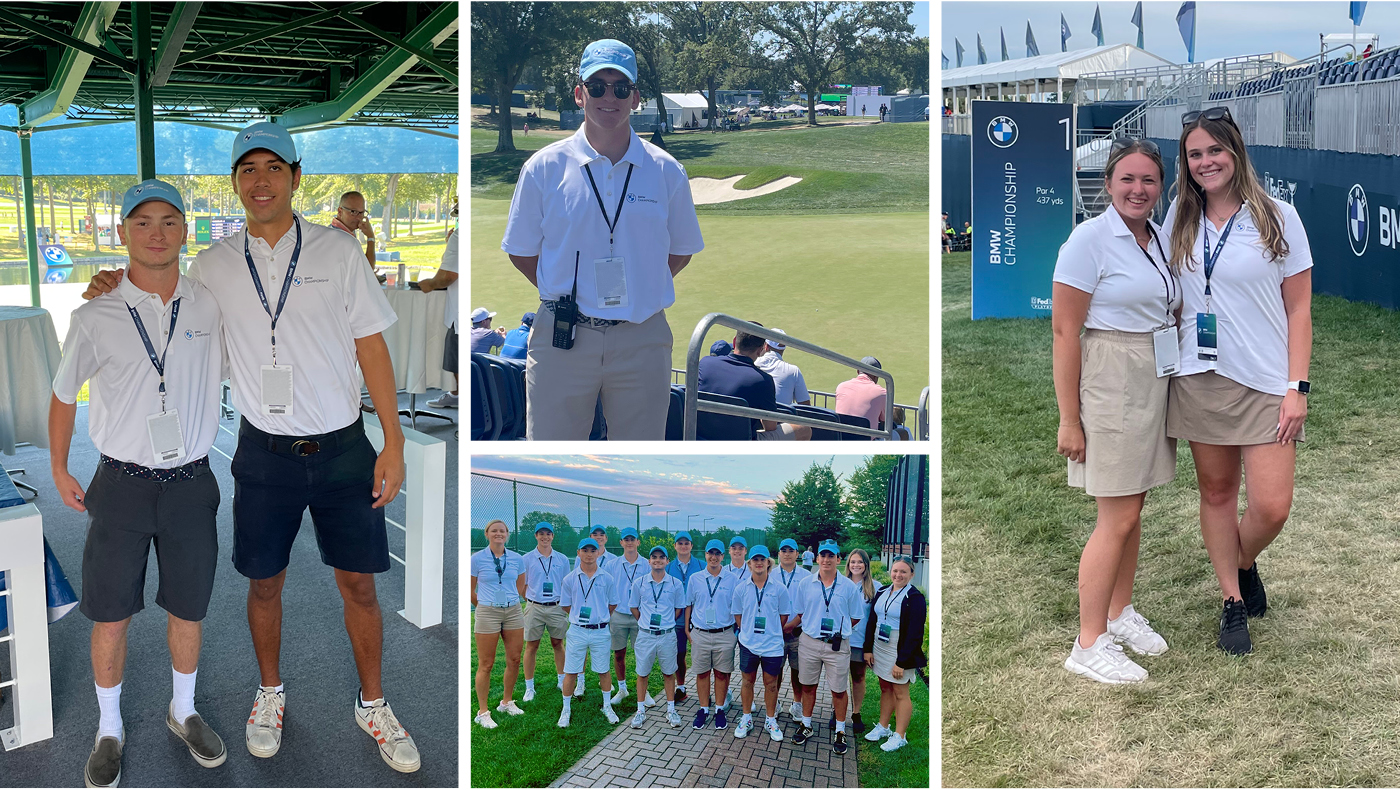 On a day when the temperature in Wilmington climbed to a blistering 92 degrees and humidity moistened the skin of anyone outside, University of Delaware sophomore and sport management major Joshua Ciliberti got a crash course in dealing with the unexpected.

Working as a venue captain at the BMW Championship on the PGA Tour at the Wilmington Country Club he focussed with rapt attention on hundreds of guests who paid as much as $950 to watch 70 of the world’s top golfers, including Rory McIlroy, Billy Horschel and Patrick Cantlay, compete from near the 12th and 13th holes in the Green Coat Club. And then it happened.

“There was this one individual. We were watching him all day and he seemed to stumble a little. It was really hot outside. So we’re monitoring him and an hour before we were closing, he was walking back to the venue and he just collapsed on us,” Ciliberti said.

Ciliberti  and his team rushed to the middle-age man’s side to give him water and wake him, then Ciliberti radioed the medical team for an emergency. He had to file a report after the ordeal was over.

“I was honestly just in a mode of adrenaline because I’ve never really handled anything like that before,” he said.

There was nothing rudimentary about Ciliberti’s four days working the popular event. Ciliberti, a sophomore, was one of 15 UD students, most in the Alfred Lerner College of Business and Economics, who were selected to work as venue captains for the golf tournament, which ran from Aug.18-21, and brought more than 100,000 spectators to the country club.

As venue captains each UD student was responsible for working a section of the green. They handled everything from scanning pricey tickets for spectators to enter tents, handing out tour merchandise, communicating with facilities support when tents lost power, or having to stop people from trying to sneak in to see celebrity golfers.

The opportunity was borne out of a partnership between UD and the Western Golf Association (WGA), which runs the BMW Championship for the PGA. Dr. Sarah Williams, assistant professor of sport management for Lerner College, sought the opportunity for her students. Ever the sports enthusiast, Williams, who worked as a referee during the NCAA Women’s Basketball Tournament, learned that the golf championship was going to be hosted in Delaware almost a year ago and started making calls.

“We figured out a partnership for UD Sport Management where we had our students work as hospitality venue captains, which was a volunteer position but it was an upgraded position with a lot more responsibility,” said Williams, who set it up where UD students could participate for free, instead of paying like other volunteers.

WGA liked the idea and Williams posted the information around Lerner at the beginning of spring semester 2022. Colleagues also shared the information to their students. Thirty students applied, including a few non-Lerner students. Fifteen were selected and eagerly awaited the tournament’s start.

“I got glowing reviews about our students from everyone from the Wilmington Country Club, the Western Golf Association and a bunch of vendors who were more than happy to have our students serve as venue captains and points of contact for the week,”said Williams.

Megan Gormley was one of many impressed by the UD students. Gormely is the Championship Manager for the BMW Championship and works with the WGA. She worked with Williams to set up the opportunity for students.

“The students were fantastic,” Gormley said. “They were engaged, showed up on time, answered questions from hospitality guests and spectators, assisted with multiple day to day tasks. We received a lot of positive feedback from our hospitality buyers and our staff really enjoyed working with them. They kept positive attitudes even though it was hot and the days were long.”

From Thursday to Sunday students and Williams had to meet at Concord Mall in Wilmington by as early as 5:30 a.m. From there they were bused to Wilmington Country Club where they had morning meetings before the tournament started at 8 a.m. and they worked 10-12 hour days. A combination of corporate sponsors such as Wells Fargo, BMW and Citibank reserved venues where students worked. Other people paid to attend.

“I wasn’t quite sure what the responsibility of a venue captain would be going into this experience and had low expectations but coming out of the experience I was impressed by the event and the work that goes on behind the scenes to make an event like this happen,” said sophomore marketing and sports management double major Emily Johnson.  Johnson said she was pulled in just about every direction during the event, but somehow found time to network with corporate clients at the event.

Gormley said that the BMW Championship wants to implement a program like they did with UD for students in every region they travel to. UD and James Madison University are the only schools that have participated in the BMW Championship. She said she would be open to having UD students return to the event if it came back to Delaware, but it is not in the near future. Students are welcome to reach out for internship possibilities, she said.

“We like to be able to have college students get a taste of the work environment, hours required, situations they could face, the problems solving needed to work and out on an event of this size,” Gormley said.

Students agreed that tasks were hard but worth it.

“From the connections made to the experiences learned, this event was one of a kind and opened my eyes to a whole new world of sports,” Johnson said.

Lerner Sophomore James Hahn, a marketing and operations management double major, grew up in Wilmington not far from the country club. His dad caddied there as a teenager. His dad and brother both attended the event on separate days. Hahn thought that there would be time for him to hang out with them while he worked, but quickly learned that work didn’t stop.

The 19-year-old admitted to feeling nervous one time in particular when spectators near the ninth green, where he was stationed started making too much noise while a golfer was trying to make a shot. Hahn had to get their attention and ask them to quiet down, and motion for people holding quiet signs to wave them at people old enough to be his parents.

“At times it would get really loud and even though there were people holding the quiet signs below in the stands, people at the bar wouldn’t see it. The first day I was there it wasn’t a problem, but on Friday people were getting loud and one of the caddies yelled up at the bar and told everyone to quiet down. After that I was like ‘oh this is going to be an issue,’” Hahn said.  So he radioed for help and sent his fellow volunteers in search of quiet signs in the midst of doing other things under his job purview.

Hahn said going into the role he expected to manage others and didn’t think he would have that big of a role. He just thought to be at a high profile golf event would be cool.

“I’m really glad I did it because it was a good experience. It gave me a taste of if I wanted to get into a sports management type of job, what it would be like and that was really beneficial for me going forward.”

For Sarah Leuliette, a junior sports management and marketing double major, although it was challenging working the 18th hole and having multiple people try to sneak in without paying, she is filled with gratitude for the opportunity. She called it a once in a lifetime experience.

“This experience showed me only a few of the things I have the possibility to do in life post-graduation. While I still haven’t fully figured out what I want to do after graduation, I am thankful to have opportunities that allow me to explore the possibilities I have. Events like this will shape how I want to proceed with my career post-graduation,” Leuliette said.

She said she took everything that she has learned in the classroom and brought it to the job, where it was amplified. She used words like fast-paced and hands on as a way to describe how she learned.

“After seeing how happy the attendees at this event were, it reminded me why I wanted to study sports management, for the experiences and excitement it brings to so many people.”