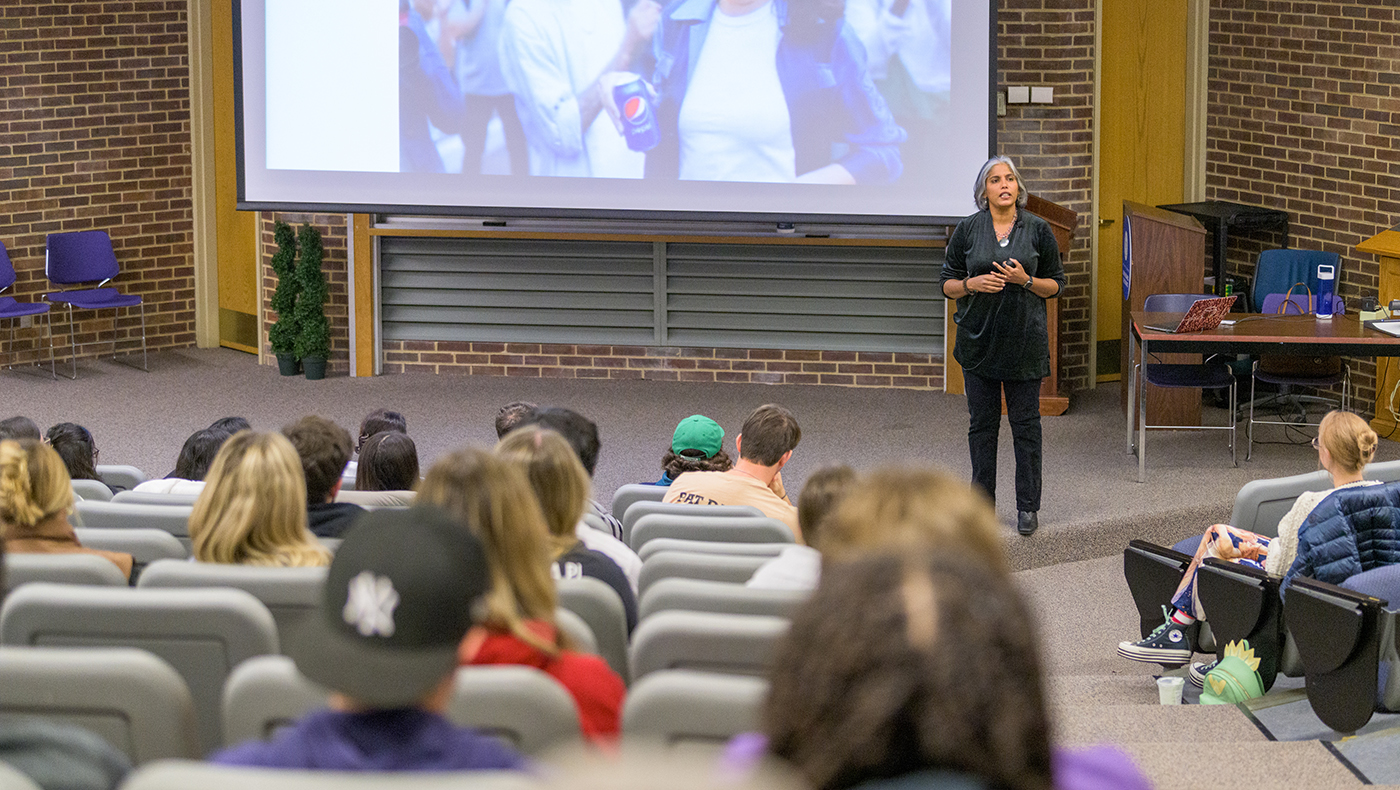 Devin Musser is a senior finance major at the University of Delaware’s Alfred Lerner College of Business and Economics. He is going to be a financial planner and help people build wealth. He knows that he will work with people of different races and ethnicities and is trying to do initial work on sensitivity before emerging into the real world.

Recently he and at least 100 other student and faculty members sat down for the latest installment of the Lerner Diversity Council’s (LDC) Race and Business lecture series, which was held in Purnell Hall.

“In my field, you’re working with clients who can be any color or race. Whether it’s clients or coworkers, having this awareness is really good for that,” Musser said. He and several fraternity members from his co-ed business fraternity Phi Chi Theta watched intently as Anu Sivaraman, assistant professor of marketing and interim LDC chair, showed the history of racially insensitive marketing ploys and advertisements that have permeated media for the past two centuries.

“I’ve seen the images and ads in other classes,” Musser said. “It’s never easy to believe that it happened back then, or even the ones that you see that are very recent. It’s good to acknowledge that that happens.”

The LDC lecture series focused on race and business and was a snapshot of what Sivaraman and Jennifer Joe,Whitney Family Professor of Accounting and Cohen Family Lerner Director of Diversity, teach in a class by the same name. The series started last May with a lecture on implicit bias and had overwhelming interest from students. The fall semester kicked off with a lecture about the wealth gap in the U.S. for communities of color and touched on food deserts, which lead to bad eating habits and higher medical bills, which is a cycle of dysfunction. The November lecture focused on the effects of mass incarceration on people of color. In December it was the business of marketing.

The lecture series was the idea of Lerner student Siddhi Patel, a senior accounting and management information systems major. Last year she was named vice president of diversity, equity and inclusion for Delta Sigma Pi (DSP), one of the school’s business fraternities.

“I genuinely had no clue what to do with the position, so I reached out to the Lerner Diversity Council,” she said. She thought maybe the LDC would come and speak to her DSP chapter and educate members on crucial DEI topics, but after she spoke to Sivaraman she saw possibilities to do more.

“From there we started brainstorming and started thinking about how we could reach out to more than just my organization. We came to the thinking that we could educate all three business fraternities on campus,” Patel said.

Throughout the hour-long lecture Sivaraman displayed images from old newspapers and television ads that marketed everyday household products like butter, skincare products and clothing using racist tropes that were offensive to various races. She covered two centuries of insensitive marketing, including recent campaigns from American companies to underscore how students heading into the corporate world have to combat institutional ignorance. She also illustrated how Hollywood propagates stereotypes about people of color.

“The ways in which you portray racial differences poorly are when you don’t know the history behind what’s happened,” said Sivaraman, who made connections to poor marketing and advertising choices by US companies during periods of unrest.

One included an insensitive commercial by beverage maker Pepsi with Kendall Jenner of the Kardashian family, which aired in 2017 and was pulled because viewers thought it was trivializing the Black Lives Matter movement. The commercial made light of the situation with Jenner giving an officer a can of Pepsi, which made everyone in the commercial look happy and that the problem had been solved.

It resurfaced on social media after George Floyd was murdered by a Minneapolis police officer.

“So these kinds of issues are avoidable simply by knowing and understanding the racial history,” Sivaraman said. “And I think a lot of diversity training misses that point. They can be about bias. They can be about how to correct your bias, but they don’t tell you the historical story because people are afraid to stand anywhere and talk about history because they are afraid of conflict.”

“I think it’s important not only for marketing, but for everyone here to be aware of their biases,” said Alexis Chopek, a senior marketing major and member of Phi Chi Theta who attended the event. “I think it’s good to be super aware. You might not even realize that you are doing it, and you have to think about what other people might feel,” she added.

Patel, who will graduate in the spring and start working in auditing for PricewaterhouseCoopers, said that her hope is that the lecture series will continue in some iteration after she leaves.

She was one of two students awarded $2,500 as part of the Joyce C. Davis Award, which is designated  for students based on academic merit and special consideration by the LDC. Patel was recognized for organizing the lecture series and Miriam Washington, a sophomore economics major, was recognized for academic excellence and her role in student organization, Women in Economics.

Another student, Jerome Phillips, senior finance major, was awarded $1,500 for the Herbert Family Scholarship, which is awarded for Lerner students who maintain at least a 3.5 GPA.

Sivaraman said she is open to continuing the series and thinks that it is something that can happen with several lectures over the course of an entire school year. It could be one of multiple initiatives by LDC, which hosts a summer camp, lunch and learns and special programming. Recently a promise wall  was unveiled in Lerner Hall that includes the names of members of the Lerner community who pledge to work toward diversity, equity and inclusion initiatives throughout their lives.