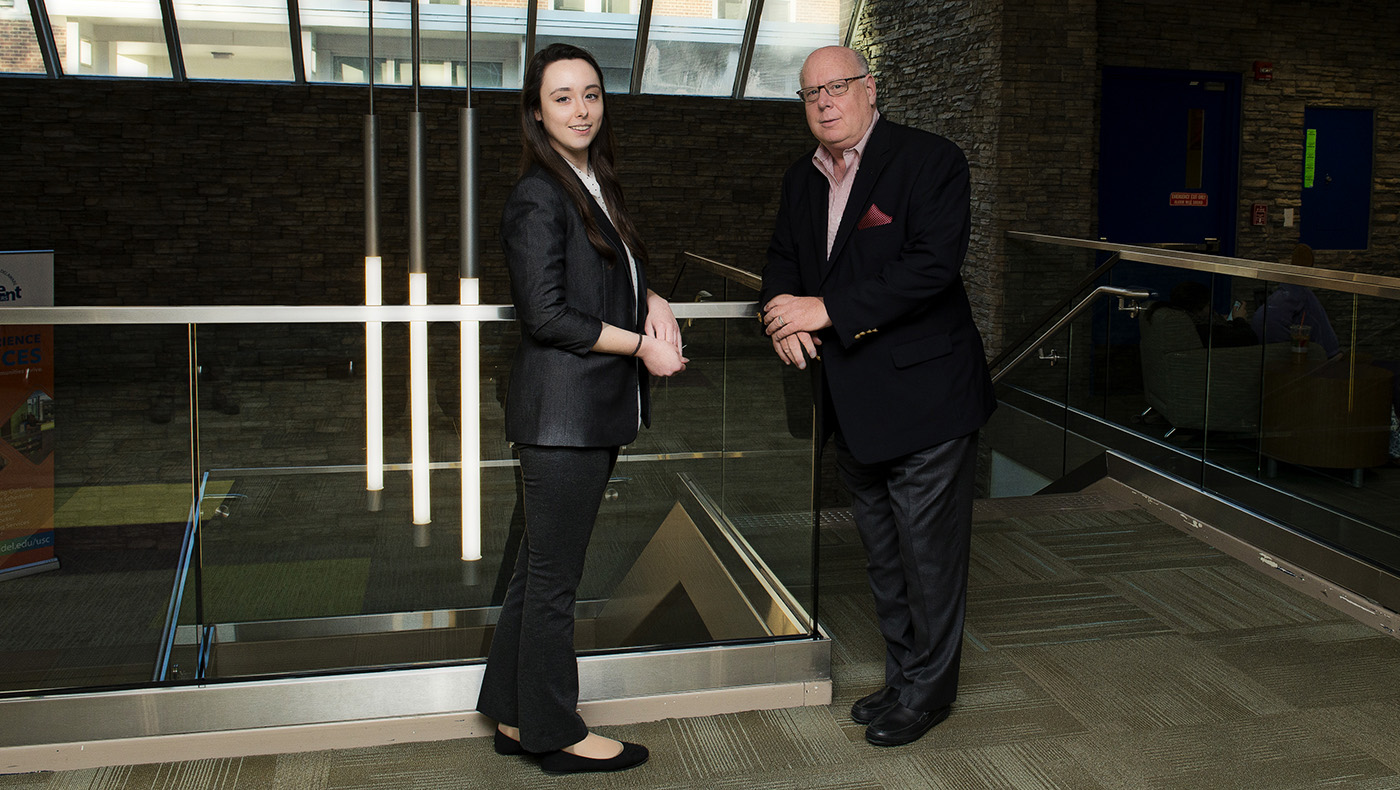 Now a senior vice president in charge of live entertainment at Time Life, Jason was approached about becoming an executive mentor through the Lerner College Career Services Center’s Lerner Executive Mentoring Program. It was good timing, as he was stepping into a role where he would have more time to devote to volunteerism and mentoring.

“Everyone in college just wants to know where they’re going to end up, but it’s almost better to figure out who you are and what you like, then tailor your goals around that instead,” said Jason.

In early 2016, Jason was introduced to Alexis Holliday and Alina Serbina. Both students had recently transferred to the University of Delaware and were looking to find ways to become more connected to the campus community. They were also looking for direction as they faced the decisions of which majors to declare, which internships to apply for and ultimately what career paths to pursue.

Lerner’s executive mentor program, which started in 2010 with approximately 20 students participating, has seen significant growth – serving more students, using new analytics capabilities to match students with professional mentors and adding staff to assist in facilitating mentor/mentee relationships. As of the fall of 2018 there were 258 mentoring pairs, with 238 undergraduate and 20 graduate students participating. In the spring of 2019, the program is set to add an additional 70 pairs in pursuit of the goal of every student in the Lerner College being matched with an executive mentor.

“I would love to see every Lerner student graduate with an executive mentor within a few years,” said Jill Pante, the director of the Lerner Career Services Center. “Mentors with 10 plus years of experience can not only guide students in their professional and career development but also open doors for them.”

This was Jason’s second time mentoring through the program, and he began his relationships with both mentees by looking over their resumes. He spent the initial meetings talking to Holliday and Serbina to figure out who they are and where their passions lie.

Holliday admitted that these first conversations were intimidating. “It was hard to feel comfortable at first, just because he is an executive and has so much experience. When we got to know each other, and worked on my resume together, the advice he gave me to seek out resources and get involved was so helpful, and it really set me at ease.”

Once he felt that he understood their motivations, Jason scheduled regular phone calls with his mentees. They established goals and priorities for the students to work towards each week. Serbina said that this process was imperative for her success.

“I needed someone to be there for me and help me put the pieces together based on my experience,” she explained. “My parents are immigrants who don’t work in my field, so I don’t have the advantage of getting professional connections through them.

“This program has really helped me expand my network, which is so important in the job search process,” Serbina continued. “Mike and I would set goals together, and I knew he was going to follow-up with me and talk through the next steps, which really kept me accountable.”

For both Holliday and Serbina, a defining experience of the program was visiting Jason’s workplace in Fairfax, Virginia. The students met with employees who were in different roles, departments and levels of seniority at Time Life to talk about their work. Serbina said that, “Just having that chance to go into his office and hear from people in all of these different fields was really helpful because it is a big company, and provided a lot of insights into what the business world is really like.”

“I think the greatest value of this program is the chance to get some real-world experience,” said Holliday. “When I visited Mike’s workplace, I was taking classes in SQL and Java, and I was able to see what their developers were working on with that. I was also taking my higher-level marketing class, and I was able to meet with his marketing director to see a promotion that she was launching.”

Holliday graduated in December of 2018 with a degree in marketing and operations management with a minor in management information systems. Serbina will graduate in the spring with a degree in marketing with a minor in international business and a concentration in Russian. This is the part of the experience that Jason said he most looks forward to as a mentor.

“It’s great to see the difference between when they started out as my mentee versus how they are at the end of their time at UD,” he said. “The two students I have now have come a long way, and we’re closing in on job offers and graduating, which is great.”

Serbina said she feels that working with Jason pushed her to focus on herself and working towards her goals. Between her busy class and extracurricular schedule, constantly setting goals with Jason and trying to meet those targets was very helpful to her. Holliday said that Jason similarly encouraged her to diversify her resume by using her existing connections to find a more corporate internship. This advice made a big impact on Holliday, who found an internship with WSFS, where she continues to work.

The best part of the program for Holliday, beyond the help with her resume and networking, is the relationship with her mentor. “You can tell that he is really invested in you,” she said. “He’s really passionate about UD alumni and wants people to be connected and involved.”

Jason added that the mentoring relationship has been mutually beneficial in many ways. Most notably, from working with Holliday and Serbina, he has adapted his approach to dealing with employees who are recent college graduates.

“I think the knowledge of anyone who has been working for a long while is really valuable to a young person,” said Jason. “It’s also just a lot of fun to see them grow and develop. You feel good about it and it’s a different relationship.”

Students and executives interested in the Lerner Executive Mentoring Program can apply until January 25, 2019 for the spring match period.