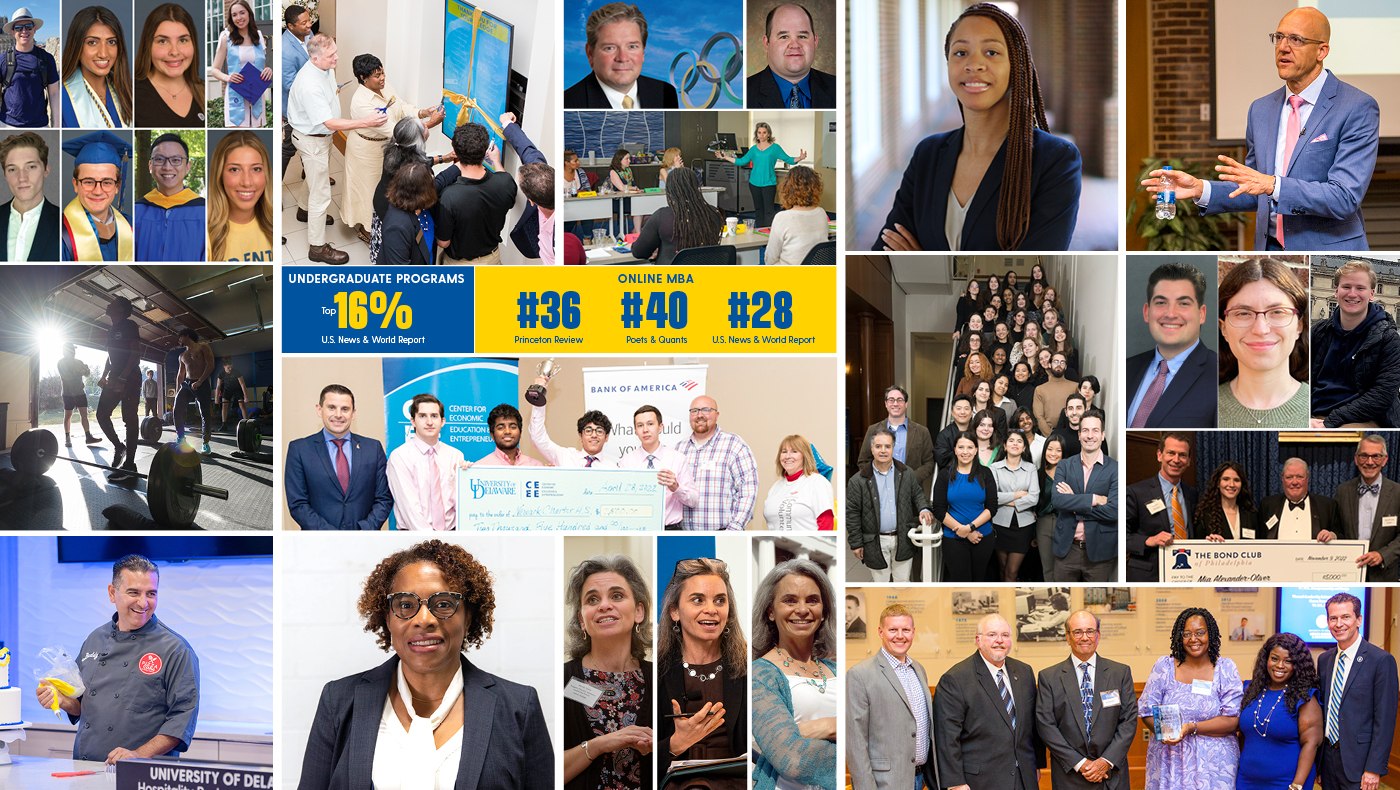 Now that 2022 has come to a close, we reflect on the exciting work and accomplishments that our Lerner College students, faculty, staff and alumni were able to achieve during the year. From student success to faculty accolades, here are our top Lerner moments of 2022:

The Lerner College rose 13 places to No. 84 in U.S. News & World Report’s 2022 Best Undergraduate Business Program rankings. The Lerner Online MBA Program continues to be ranked among the top programs in the country. Lerner was ranked No. 28 in the U.S. News and World Report rankings in January. Late in the year the program was also ranked No. 36 by The Princeton Review and No. 40 by Poets & Quants.

Numerous Lerner College students were recognized through awards and scholarships for their excellent work throughout the year. Carl Stewart received the Philadelphia Sports Writers Association Foundation Award for Excellence in Journalism. Mandy Zicherman placed among the top 1% of participants in the National RNMKRS competition and was named the top UD student out of over 90 Blue Hens participating.  Isaac Perera was selected by the Public Accounting Oversight Board to be a PCAOB Scholar. Student investors in UD’s Blue Hen Investment Club beat the S&P 500 Index this year, continuing their three-year streak and making the first time in UD history that BHI
beat the S&P four out of five five. Mia Alexander-Oliver was given the Howard A. Trauger Award from The Bond Club of Philadelphia.

Andrea Everard, professor of management information systems and Associate Dean of Undergraduate Programs in Lerner College, discovered Jeremy’s Moore nonprofit More than Fitness (MTF) and developed it into the real-world case for this year’s Carl A. Ammon Case Competition held in March. Through the case, Lerner graduate students addressed issues around creating awareness, fundraising and board development for MTF. Additionally, a team of Lerner MIS students worked on a project to develop an app for the organization.

Jeffrey Kleintop, chief global investment strategist for the Charles Schwab company and a 1993 Lerner College graduate, shared his insights from his more than two decades of experience in finance and investing in a lecture entitled “How to Lead in a Crisis” for the annual Chaplin Tyler Lecture.

This summer Lerner students pursued an array of internships and professional development opportunities. Each profile in the series provided a glimpse into one of these unique experiences. Additionally, Ashley Smith was selected for the Girls Who Invest Summer Intensive Program. Also, sport management students in Lerner College worked as venue captains for the PGA Tour’s BMW Championship at the Wilmington Country Club from Aug. 18-21 that brought more than 100,000 spectators to the event.

Jennifer Joe, Whitney Family Professor of Accounting, Cohen Family Lerner Director of Diversity and Chief Diversity Advocate in Lerner College, was named to the PCAOB Investor Advisory Group (IAG) and Standards and Emerging Issues Advisory Group (SEIAG). She is the only academic appointed to serve on both advisory groups. In December, Joe was named a 2022 Women in Business honoree by Delaware Today Magazine.

Wendy Smith, Dana J. Johnson Professor of Management and co-director of the Women’s Leadership Initiative in Lerner College, was elected as a fellow of the Academy of Management (AOM), the leading professional organization for management scholars. Smith was also named in Clarivate’s global list of highly cited researchers for the fourth year in a row.

Renowned baker Buddy Velastro spoke with two groups of Lerner College students as part of the Paul Wise Executive Speaker Series. Valastro spoke about his journey, answered questions from students and staff, and did a cake decorating demonstration at Vita Nova.

Lerner College students toured Philadelphia with their Sorbonne Nouvelle peers and then participated in a trade simulation in Lerner Hall as part of a study abroad exchange program. The UD students will make a return trip to Paris during Winter Session.