Lessons on ethics and values in business 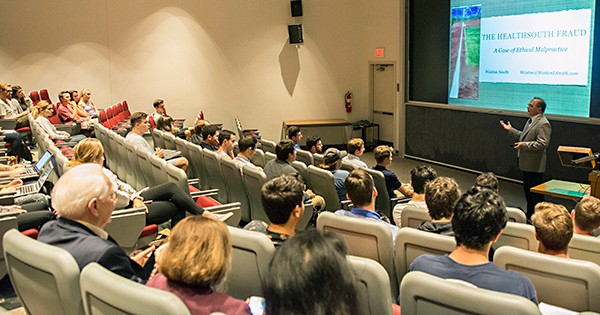 The former chief financial officer of HealthSouth Corporation, Weston Smith, visited the University of Delaware in October to give a lecture on the lessons he learned from his experiences with the company and the events that landed him in federal prison for fraud.

Scott Jones, professor of accounting in UD’s Department of Accounting and Management Information Systems and interim associate dean at UD’s Alfred Lerner College of Business and Economics, said that students can learn valuable lessons from experiences like Smith’s, especially given the critical role that financial crises have played in the recent history of the United States.

“During their lifetimes, students today have witnessed numerous financial crises brought on by unethical behavior,” Jones said. “They know people who have lost life savings in real estate and other investments, so they are engaged in any type of learning that can help them understand how to cope with unethical organizational pressures.”

Speaking to a joint meeting of the UD student chapter of the Center for Public Trust and the Blue Hen Investment Club, Smith described to students the way that over 12 years, HealthSouth grew into a Fortune 500 company with over 2000 locations in all 50 states and five countries, specializing and operating in outpatient rehabilitation centers, surgery centers and diagnostics divisions.

The company continually exaggerated company earnings to meet the expectations of investors, and Smith ultimately came forward to expose the fraud of the company and take responsibility for the mistakes he made in maintaining the fraudulent activity. He faced the consequences for these actions in the early 2000s, serving 14 months in federal prison.

Smith now lectures around the country on ethics, and the importance of staying true to one’s character and values. During his presentation at UD, Smith discussed whether business ethics and general ethics should be treated as the same.

He said that he recognizes the different types of fraud that exists in the business world, and that fraud can be subtler than people might realize. He admits that he made many bad decisions along the way, and stands firmer in his values today as a result.

“What does fraud really mean?“ Smith asked. “Sometimes we tend to think of it in terms of a boss coming to you and saying, ‘I need you to do the following things, and it’s a black and white choice, yes or no.’ Well, it’s rarely the way it actually works. So much fraudulent behavior comes out of self induced choices, poor choices that we make.”

Kamren Tinsley, a junior business management major, said he thought one of the most thought-provoking parts of the lecture was how Smith maintained his position at HealthSouth.

“It was very interesting to learn that he got the job while the fraud was already happening and he was put right into the situation,” Tinsley said. “He told us how he was pressured to keep lying on the financial reports to keep up with the Wall Street’s projections.”

The lesson that Smith emphasized the most during his lecture was to always stay true to your values, and to make the right decisions, no matter how much someone else is pressuring you to make the wrong choice.

Tinsley added, “Something that [Smith said] really stuck with me [was that] in the business world, you may be pressured to fix some things for the company’s sake, but you have to stay true to your values and make sure you do what is right.”

Students who are interested in programs about ethical leadership are encouraged to learn more about the UD student chapter of the Center for Public Trust.